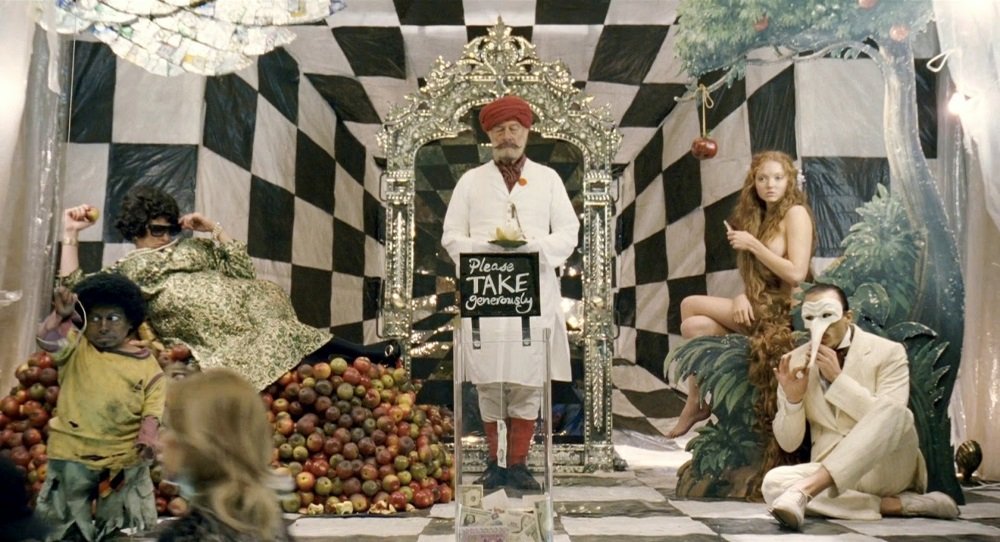 With The Imaginarium of Doctor Parnassus (2009) Terry Gilliam, the mad imagineer of such wickedly funny and wildly creative visions as Brazil and The Adventures of Baron Munchausen and Twelve Monkeys (okay, that last one isn’t quite so funny), dives back into his diabolical imagination for this carny sideshow of a Faust tale in the blurry boundary between the material world and the dream world.

Christopher Plummer’s Doctor Parnassus could be an alter-ego for Gilliam. He’s a traveling showman as steampunk fantasist trying to jump-start the imaginations of a modern world with his own little theatrical spectacles, cobbled together from age-old theatrical conventions and a magical device called The Imaginarium, which quite literally is a door into the imagination.

His motivations are never fully explained, nor are his wagers with the dapper Mr. Nick (Tom Waits, with a pencil mustache and a wicked smile), the devil to his Doctor Faustus. Plummer brings a mix of dignity and degradation to Parnassus, a man whose pride and hubris has been brought low after centuries of immortality. He’s an impotent God who has given up on everything except his daughter, Valentina (Lily Cole), which only exacerbates his self-pity. Her soul was wagered to the devil long ago and it comes due on her sixteenth birthday, just days away. So Mr. Nick offers him another wager, and Parnassus plays for the soul of his daughter.

Heath Ledger is Tony, the stranger that the troupe rescues from the end of a noose, and he becomes the engine that drives the film. Charismatic and oh-so-smooth, the handsome amnesiac steps in as the ringmaster / barker / master of ceremonies, rounding up crowds (of mostly women) for the performances and riffing a patter to hold their attention as the stage show behind him falls apart. But he’s the anti-Parnassus, a man with a criminal past and a con-man’s mind to bend stories to serve his will and his greed, figuratively and literally. (And seriously, there is something really creepy about a grown man plotting his seduction of the sweet sixteen Valentina, even if sexy-cute former fashion model Cole is comfortably of age.)

Ledger died halfway through the production and Parnassus almost became another of Gilliam’s lost films, but with the gracious help of three marquee actors (Johnny Depp, Jude Law and Colin Farrell) and an ingenious rewrite, Gilliam was able to complete the picture by having Tony transform upon his journey through the Imaginarium.

It’s an imaginative and narratively inspired solution that works for the film, both conceptually and dramatically. Gilliam’s best films ground the phantasmagorical visions in a reality specific to his story and even the wildest details resonate with the material world of the players. It’s his stories that tend to have a sketchy narrative quality, like it’s a draft or two away from completion, and his storytelling can be very messy. There are times where the film seems careening out of control, or at least lost in the phantasmagoria. Yet for all the rough edges and dark patches, it’s a joy to get lost in. This is Gilliam’s universe, one of benevolent creativity and unforgiving fate, where the devil is in the details.

It was nominated for two Academy Awards, for costume design and art direction.

Leaves Hulu at the end of May. Add to My Stuff.

, iTunes, GooglePlay and/or other services. Availability may vary by service.
The Imaginarium of Doctor Parnassus [Blu-ray]

The Imaginarium of Doctor Parnassus [DVD]

The DVD and Blu-ray editions are filled with a wealth of supplements. Gilliam overflows with stories and observations and background details to every scene in his solo commentary track (including the adjustments made after Heath Ledger died), which is marked by a mix of enthusiasm and modesty: he doesn’t always understand his creative impulses, but he feels the accumulation of the details. There’s a single deleted scene (with unfinished special effects) which can be viewed with optional Gilliam commentary, a handful of short featurettes and tributes to Heath Ledger (including a brief audio interview from 2007). Exclusive to the Blu-ray is the six-minute “The Imaginarium of Terry Gilliam” and a breakdown of a major special effects sequence in four stages, from animated storyboard to finished film.