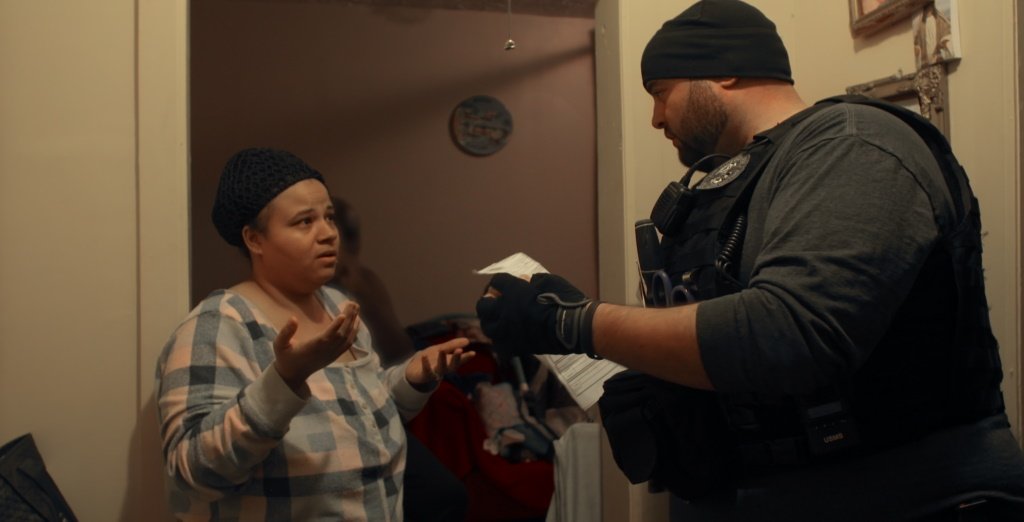 The nonfiction limited series “Immigration Nation” (TV-MA) offers a detailed portrait of the broken immigration system and the dehumanizing treatment of immigrants over six provocative episodes. Filmmakers Shaul Schwarz and Christina Clusiau were given unprecedented access to ICE agents across the country by the Trump administration for three years, and then fought to get the film seen when the government tried to stop it from being shown. (Netflix)

The four-part docuseries “The Last Narc” (TV-MA) explores the 1985 kidnapping and murder of DEA Agent Enrique “Kiki” Camarena, the most notorious murder in the history of the DEA, and finds troubling connections between the Mexican drug cartels and the CIA. (Amazon Prime Video)

Seth Rogen plays two roles in the comedy “An American Pickle” (2020, TV-14), about a Jewish immigrant from 1920 New York who awakens in 2020 after a freak accident in a pickle factory. (HBO Max)

Taika Waititi’s “Jojo Rabbit” (2019, PG-13), which takes on Nazi Germany and satirizes the cult of Hitler with a sense of childlike whimsy, won the Oscar for adapted screenplay. (HBO Max and all HBO platforms)

“The Peanut Butter Falcon” (2019, PG-13) is a mix of modern road movie and rural rafting drama starring Shia LaBeouf and Dakota Johnson with newcomer Zack Gottsagen, who plays a runaway teenage boy with Down syndrome. (Prime Video and Hulu)

“Dora and the Lost City of Gold” (2019, PG) brings the animated kid series to the big screen for a family-friendly live-action adventure starring Isabela Moner as the intrepid teen explorer and on a mission to save her parents (Eva Longoria and Michael Peña). (Prime Video and Hulu)

The animated comedy “Star Trek: Lower Decks – Season 1” (not rated), created by Rick and Morty writer Mike McMahan, follows the misadventures of the support crew of one of Starfleet’s least important ships. (CBS All Access)

Classic pick: Burt Lancaster plays real-life convict Robert Stroud in “Birdman of Alcatraz” (1962), a smart, nuanced drama about a career criminal who turned himself into an internationally recognized authority on birds and their diseases while in solitary confinement. It earned four Oscar nominations. (Amazon Prime Video)

With theaters shuttered across the country for four months now, more movies than ever are debuting direct to VOD. Here are a few highlights from this week’s debuts:

Acclaimed Colombian filmmaker Ciro Guerra directs the Euro-American historical allegory “Waiting for the Barbarians” (2020, not rated) starring Mark Rylance as an ineffectual magistrate and Johnny Depp as a brutal, bigoted military Colonel in an unnamed colonial outpost. It comes to VOD from a robust film festival rotation.

A twist on the contagion thriller, the surreal “She Dies Tomorrow” (2020, R) looks at what happens when people wake up knowing that they are going to die in a day. Filmmaker Amy Seimitz directs Kate Lyn Sheil and Jane Adams.

On the lighter side is “Made in Italy” (2019, R) a comic drama starring Liam Neeson and Micheal Richardson as a father and son reconnecting in Tuscany.

Coming to Premium VOD is a new version of “The Secret Garden” (2020, PG), adapted from the beloved novel by Frances Hodgson Burnett about an orphaned girl who finds a magical garden hidden in her uncle’s estate. Colin Firth and Julie Walters star with Dixie Egerickx as the young girl.

“Pick of the Litter” (2018, not rated) is a warm and fuzzy documentary that follows five puppies training to become guide dogs for the blind.

“Connected: Season 1” (TV-14), subtitled “The Hidden Science of Everything,” combines science, history, and nature to see how seemingly unrelated events and phenomenon are connected. Hosted by science reporter and host Latif Nasser.

In the teen comedy “Work It” (2020, not rated), a high school student puts together her own dance squad, despite the fact she can’t dance.

International TV: “World’s Most Wanted: Season 1” (France, not rated, with subtitles) spotlights five of the most wanted international criminals.

Spike Jonze directs the strange and inventive comedy “Being John Malkovich” (1999, R) with John Cusack and Cameron Diaz and Michel Gondry directs the bittersweet romantic comedy “Eternal Sunshine of the Spotless Mind” (2004, R) with Jim Carrey and Kate Winslet, both from original screenplays by Charlie Kaufman.

Clark Duke directs and stars alongside Liam Hemsworth as low-level enforcers of a drug kingpin (Vince Vaughn) in the crime thriller “Arkansas” (2020, unrated).

Two of Woody Allen’s best are new: his low-key comedy “Broadway Danny Rose” (1984, PG) and his marvelous ensemble piece “Hannah and Her Sisters” (1986, PG-13), which earned Oscars for Allen’s screenplay and for actors Michael Caine and Dianne Wiest.

Christian Bale and Russell Crowe star in “3:10 to Yuma” (2007, R), a smart remake of the classic western from director James Mangold. (Prime Video and Hulu)

True stories: “Slay the Dragon” (2020, PG-13) looks at the efforts to stop gerrymandering and “Dominic Fike, At First” is the second feature-length documentary in “The New York Times Presents” series.

Matthias Schoenaerts is a violent convict whose life is turned around when he trains a wild horse in an experimental rehabilitation program in “The Mustang” (2019, R), a drama inspired by a true story. (All HBO platforms)

True stories: “The Swamp” (2020, TV-14) digs into the inner workings of Washington politics during the Trump administration. (All HBO platforms)

More classics: Nicholas Ray directs the film noir classics “They Live by Night” (1949), his directorial debut and the most sympathetic of the “criminal lovers on the run” genre, and “On Dangerous Ground” (1952) with Robert Ryan and Ida Lupino.

The documentary “Howard” (2018, not rated) presents a portrait of Oscar-winning lyricist Howard Ashman, who helped shape some of Disney’s greatest animated musicals before passing away of AIDS in 1991. It’s directed by his friend and collaborator Don Hahn.

“Upright: Season 1” (not rated) is a dramedy about a struggling musician (Tim Minchin) and a runaway teenager Meg (Milly Alcock) on a road trip across Australia. Two episodes available, new episodes each week.

The anthology series “Moving On: Seasons 1-9” (2009-2018) from award-winning writer Jimmy McGovern presents a series of stand-alone dramas about people facing major change in their lives.

“Australian New Wave” collects 21 films from the blossoming of homegrown Australian cinema between 1971 and 1982, from classics like Peter Weir’s “Picnic at Hanging Rock” (1975, PG) and “The Year of Living Dangerously” (1982, PG) to Fred Schepisi’s provocative “The Chant of Jimmie Blacksmith” (1978, R) and Gillian Armstrong’s “My Brilliant Career” (1979, G) with Judy Davis. New on Criterion Channel this month. Also new: