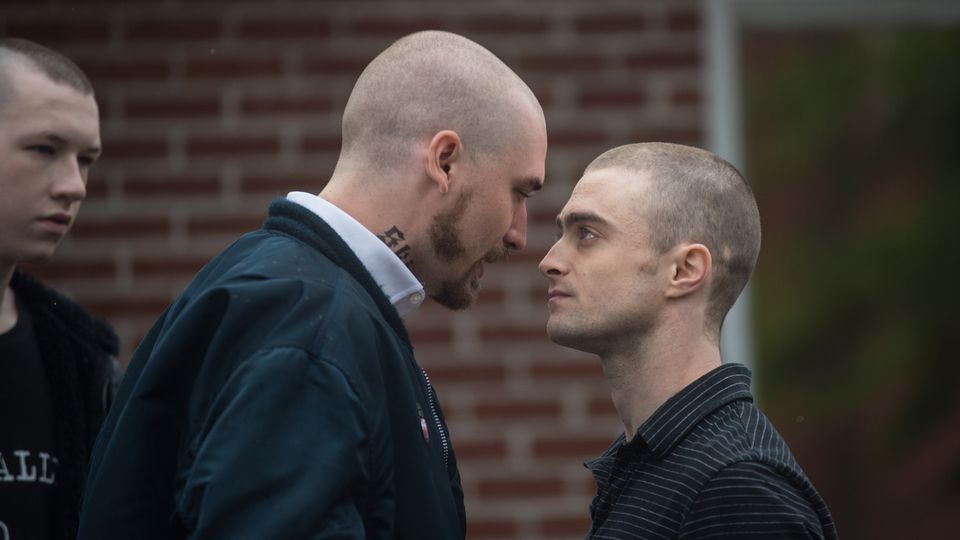 Imperium (2016), an undercover thriller “inspired by real events” (which I guess is a step removed from “based on a true story”), stars Daniel Radcliffe as an FBI analyst working the social media end of the terrorist watch team.

Nate is intelligent, observant, and cultured but socially awkward, a loner and the butt of jokes and pranks from his colleagues, which is what qualifies him to go undercover in the White Supremacist culture after a deadly cargo of radioactive material is smuggled into the U.S. His boss (Nestor Carbonell) is sure it’s the work of Radical Islamic terrorists but Agent Zamparo (Toni Collette) is convinced it’s more homegrown and she drafts Nate from his desk job to go into the field in a deep cover operation.

It’s an opportunity for Radcliffe to shuck off a little more of his Harry Potter innocence as Nate shaves his head and blithely tosses out anti-Semitic remarks and racist epithets to prove his bona-fides to the skinhead punks, militia leaders, neo-Nazis, and media demagogues of the movement. Nate’s cover is that of an ex-Marine disillusioned from his time in Iraq and while his slight frame doesn’t quite match the backstory, he brings a steely calm and confidence to his undercover alter-ego.

The script sends him through a series of tests that differs from the undercover thriller template only in the details and director Daniel Ragussis, who also scripted, never manages to wind up the tension. But if we’re never on the edge of our seats, it delivers a portrait of a movement that sucks up the angry, disappointed whites who see their failures as a conspiracy of disenfranchisement by pointing the finger at Jews, African-Americans, Hispanics, Arabs, and pretty much anyone that looks different from them.

Nothing revelatory but it is engaging, thanks to Radcliffe as an outcast who fits in not because he buys any of the malarkey but because he understands feeling left out. He gets to like these people, even if he abhors their beliefs. And with so many portraits of the racist fringe bordering on cartoon, it’s worth being reminded that real people get caught up in the propaganda and twisted into hateful beliefs.

The Blu-ray and DVD editions include filmmaker commentary, the featurettes “Living Undercover” and “Making Imperium,” and cast and crew interviews, plus a bonus Ultraviolet Digital copy of the film.