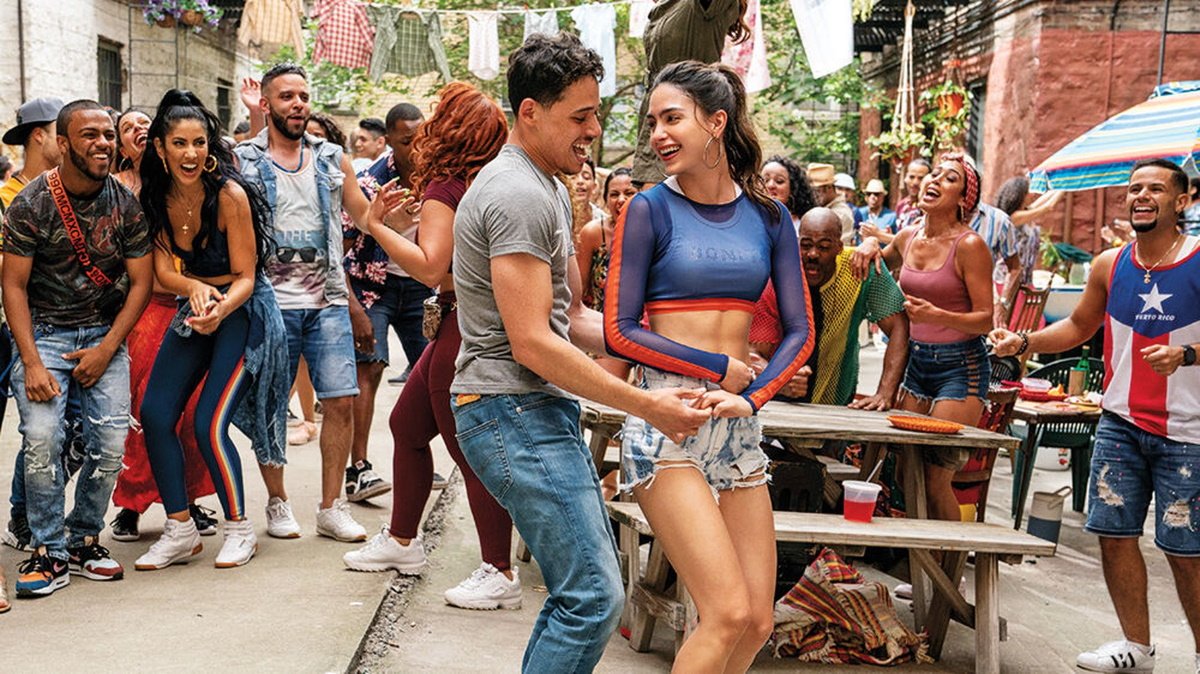 Before “Hamilton,” Lin-Manuel Miranda created a contemporary musical set in the predominantly Latino Manhattan neighborhood of the Washington Heights. “Crazy Rich Asians” director Jon M. Chu takes the Tony-winning stage musical “In the Heights” (2021, PG-13) to the screen with Anthony Ramos taking the lead as the first generation Dominican-American torn between his two cultures. Miranda costars along with a mix of newcomers and original Broadway cast members reprising their roles. The release was delayed by a year and streams the same day it opens in theaters for only 31 days from its June 10 premiere. (HBO Max)

“Infinite” (2021, PG-13) stars Mark Wahlberg as a man who discovers that his hallucinations are actually memories of past lives. Armed with the skills of previous identities, he joins others to save the world from a conspiracy hatched by one of their own (Chiwetel Ejiofor). Sophie Cookson, Jason Mantzoukas, Toby Jones, and Dylan O’Brien costar in the action thriller directed by Antoine Fuqua. Originally slated for theaters, it now debuts as a streaming exclusive. (Paramount+)

Tom Hiddleston reprises his role as the Norse god of mischief in the small screen series “Loki: Season 1” (TV-14), which finds the MCU villain drafted by a secret organization to help protect the timeline that Loki himself disrupted in “Avengers: Endgame.” Owen Wilson gives the scene-stealing character a run for his money as the agent in charge and Gugu Mbatha-Raw and Richard E. Grant costar. New episodes on Wednesdays. (Disney+)

The wait is over: “Lupin” (France, TV-MA, with subtitles), the sleeper caper drama hit about a master thief (Omay Sy) who uses his skills to take revenge on the crooked industrialist who framed his father, returns with new episodes.  (Netflix)

Cult pick: the Asian new wave western “Tears of the Black Tiger” (Thailand, 2007, not rated, with subtitles) is an exuberantly excessive pop-art confection that both spoofs and celebrates the crazy conventions of movie melodramas and genre clichés. (Amazon Prime)

“Wish Dragon” (2021, PG) is a family friendly animated fantasy about a teenager in China who inadvertently conjures a dragon with genie-like powers.

True stories: “Kitty Love: An Homage to Cats” (Netherlands, TV-14) follows the daily lives of a group of Dutch felines.

International passport: a teenager in rural India battles sexism to compete in the national skateboarding championship in “Skater Girl” (India, 2021, PG, with subtitles).

“The Odyssey” (France, 2018, not rated, with subtitles) dramatizes the story of how Jacques Cousteau financed his research through TV documentaries that made himself a household name. Lambert Wilson and Audrey Tautou star.

Sam Neill and Michael Caton are feuding brother sheep farmers in “Rams” (2021, PG-13), the Australian remake of the Icelandic comedy,

“Starstruck: Season 1” (TV-14) stars New Zealand comedian Rose Matafeo as a millennial in London whose life is upended after a one-night-stand with a movie star. Also new:

Hugh Jackman stars in the superhero prequel “X-Men Origins: Wolverine” (2009, PG-13) and “Ice Age: Dawn of the Dinosaurs” (2009, PG) is the third film in the prehistoric animated franchise.

In the fantasy thriller “Moloch: Season 1” (France, not rated, with subtitles), a journalist (Marine Vacth) and psychiatrist (Olivier Gourmet) investigate when citizens of a seaside town spontaneously combust. All six episodes available.

The sports documentary “The Greatest Race” (2021, not rated) looks back at the swimming events of the 2008 Beijing Olympics.

“Timewasters: Complete Series” (TV-PG), a British comedy about a jazz combo from South London who stumble into a time machine that sends them back to the 1920s and then the 1950s, makes its stateside debut streaming free with ads.

“The Amusement Park” (1973/2019) follows an elderly, disoriented man through a crowded theme park as an allegory for aging in America. Directed by horror movie legend George Romero in 1973 but never released, it was recently rediscovered and restored. (Shudder and AMC+)

“The Middleman” (France, 2019, not rated, with subtitles), starring Mathieu Amalric as a divorced real estate agent who takes advice from a talking goldfish, is a surreal limited series comedy created by Israeli author Etgar Keret and Shira Geffen. It makes its stateside debut on Criterion Channel. Also new: