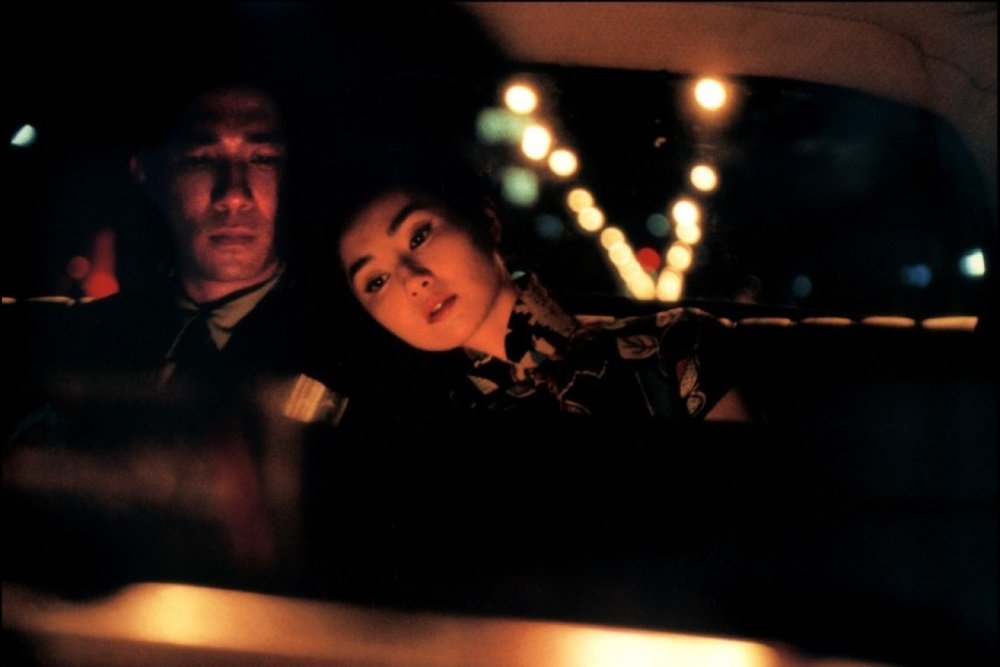 There may be no more sensual director in the world than Hong Kong’s Wong Kar-Wai, and In the Mood for Love (Hong Kong, 2000) is one of his richest and most melancholy works, a shadow dance of would-be lovers sketched in suggestions and intimations.

Maggie Cheung and Tony Leung Chiu-Wai star as next door neighbors in a crowded apartment building, a tiny community bustling with chit-chat, pot-luck dinners, and all night mah-jong games. Married to mostly absent spouses who are unseen even when present (Wong leaves them a disembodied off-screen voice), they wander through the cramped hallways and dark staircases alone, so wrapped up in their loneliness that they pass one another with hardly a nod of greeting. When they suspect that their spouses are having an affair they meet to compare notes, but even in friendship and growing affection they keep their social faces in place.

Cheung, wrapped tightly in elegant, high-necked dresses, is poised and perfect and so corsetted she can hardly move, and she lives her life that way. When the lonely almost-lovers flirt, it’s play-acting come therapy, interrupted only when it becomes too personal.

Wong (and his cinematographers Christopher Doyle and Mark Lee Ping-bin) shoots the film from around corners, under tables, through doorways and windows, eavesdropping on a life. Slivers of scenes dissolve into one another as time is lost to mood and emotion; the film doesn’t progress as much as spiral lazily around the characters. Wong remains on the outside looking in but his gliding camera finds a grace in their sadness and his simmering colors allow their repressed emotions to burn their way into the screen.

It won two awards at the Cannes Film Festival and won best foreign language film and best cinematography from the National Society of Film Critics.

It was voted number 5 in the 2022 Sight and Sound Greatest Films of All Time poll.

The Criterion Channel presentation includes numerous supplements from the Criterion disc release, including the documentary “@ In the Mood for Love,” an interview with filmmaker Wong Kar-wai, four deleted scenes, and additional interviews, featurettes, and trailers.

Also available on DVD and Blu-ray in a deluxe Criterion edition and on SVOD through Amazon Video, iTunes, GooglePlay, Vudu and/or other services. Availability may vary by service.
In the Mood for Love (The Criterion Collection) [DVD]

In the Mood for Love (The Criterion Collection) [Blu-ray]

Criterion’s dreamy looking HD debut on Blu-ray was supervised by director of photography Mark Lee Ping-bin and it simply glows in the color and texture of the film. The DVD was released years earlier from a previous restoration. The two-disc DVD and single-disc Blu-ray editions both feature four fully edited and scored deleted sequences (running over 30 minutes in total) with optional (and intermittent) commentary by director Wong Kar-wai, his full length documentary “@ In the Mood For Love”, and his lovely short film “Hua Yang De Nian Hua” (a cinematic kiss celebrating the images of classic Chinese cinema discovered from an abandoned collection of old prints), plus interviews with the director, footage from the Toronto Film Festival press conference with stars Maggie Cheung and Tony Leung Chiu-wai, an essay by film scholar Gina Marchetti on the film’s setting, an interactive essay on the film’s music, bios, stills galleries, an electronic press kit, TV spots, and trailers. The accompanying 48 page booklet features liner notes by Li Cheuk-to and the complete short story (translated into English, of course) “Intersection” by Liu Yi-chang, which was an influence on the film.