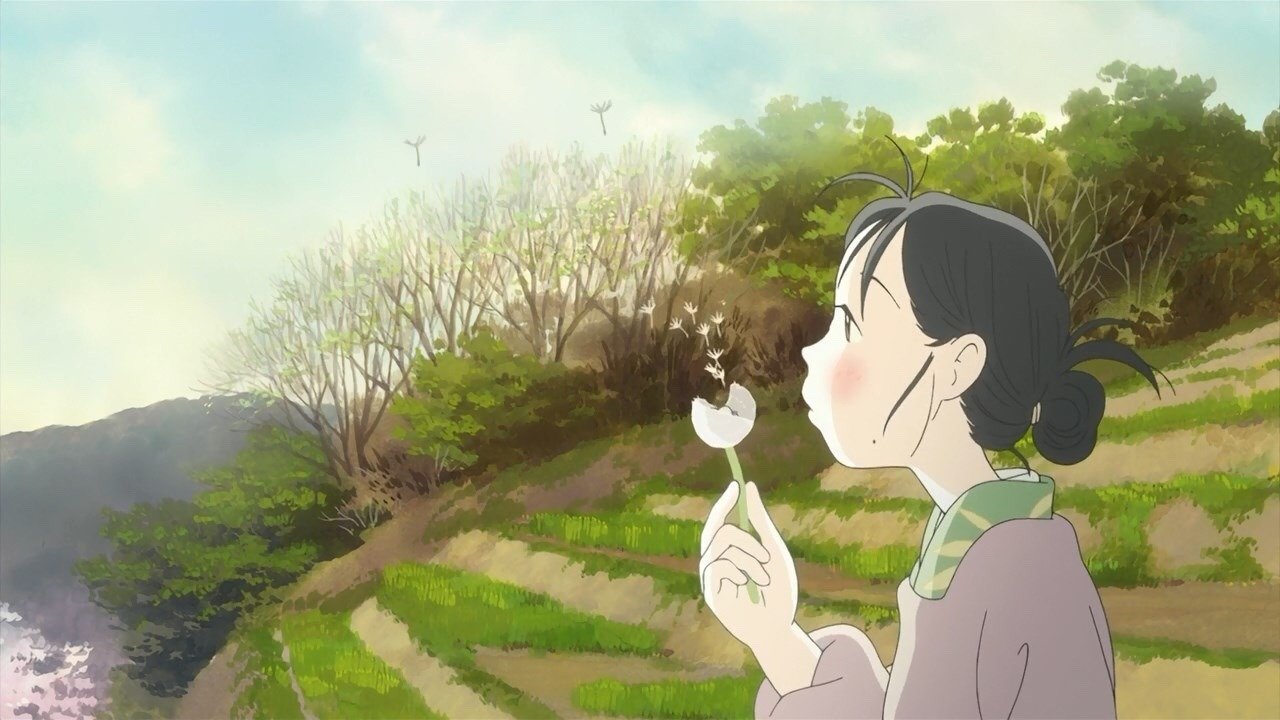 In This Corner of the World (Japan, 2016), adapted from the acclaimed manga by Fumiyo Kono, charts life in Japan from 1934 through 1946 as seen through the eyes of a young woman.

Suzu is a teenage schoolgirl in Hiroshima when we meet her, a budding artist with a bullying older brother and a spritely younger sister, who marries a boy she barely knows and becomes part of his family in Kure, a nearby town with a major naval port. We quickly skip through the years to the World War II, which seems far away and unreal at first but becomes more present as the war turns, friends and family members are reported dead in combat, and air raids become increasingly frequent and destructive. Through it all Suzu tries to be a good wife to her gentle husband and a devoted daughter to her in-laws, finding ways to stretch meager stores as food rations become smaller and enduring the devastating attacks on her home that ultimately take members of the family.

It’s illustrated in the traditional hand drawn style of classic Japanese animation with simple lines and subdued, painterly colors and takes a reflective approach to Suzu’s story, approaching it through her energy and optimism and imagining harsh reality through the artist’s eye of Suzu. Even the atomic attack on Hiroshima is seen from afar, a storm cloud emerging from behind a mountain. Yet for all the loveliness of the imagery and the tenderness of the drama, director Sunao Katabuchi never denies the loss and destruction of the war. It ducks politics and mostly steers clear of the militancy of Japanese culture that drove the country to war, which only bubbles to the surface in one outburst late in the war. Instead it focuses on the civilian experience of the working class outside of urban society, the spirit of survival within families and communities, and the compassion that rebuilds the family in the aftermath.

But there are touches that remind us, in the gentlest of nudges, of the culture they know nothing about just outside their experience. My favorite is an accidental detour through the base town’s red light district, where Suzu meets a girl her own age and then leaves without ever learning what kind of business is conducted around her. Like that scene, the film is really quite delicate for such heavy themes and experiences.

Rated PG-13 for mature themes but no explicit imagery or language.

Presented in Japanese with English subtitles and English dub versions

, iTunes, GooglePlay and/or other services. Availability may vary by service.
In This Corner Of The World [Blu-ray + DVD]

In This Corner Of The World [DVD]