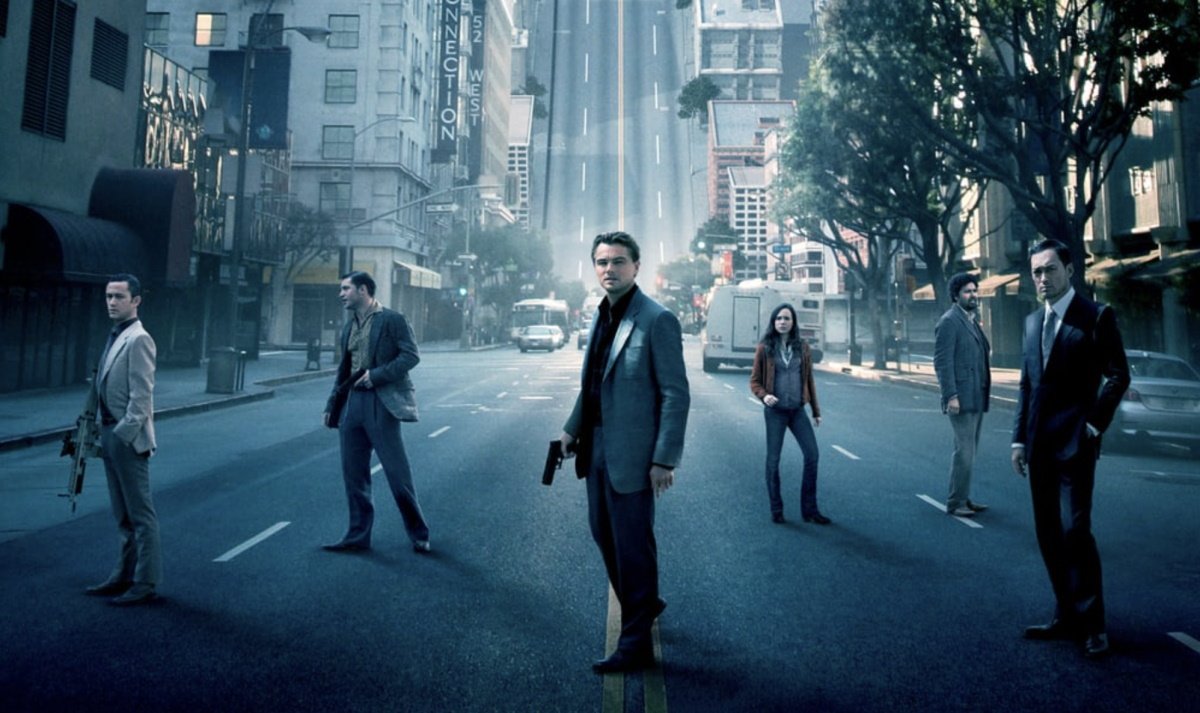 Christopher Nolan’s Inception (2010), a caper film that heists dreams instead of treasure, is surely the most cerebral action thriller to become a blockbuster. It’s a genre film that reshuffles the rules and lays them out in a mind-bending pattern. Playing out on multiple planes of dream reality, it’s also another Nolan film to completely reimagine the world of cause and effect. But rather than tell a story, Nolan builds a construct and then plays within that construct. This script is more designed than written, the film constructed as much as directed, and that becomes all the more evident on repeat viewings.

The caper involves planting an idea in the mind of a CEO that will shift the course of the company in ways that will benefit the employers of our psych-squad, but the film is far more interested in the metaphysics of the idea itself than this Maguffin of a set-up. Leonardo DiCaprio stars as team leader Cobb, a head case on a level all his own. The backstory explains how he lost his wife, Mal (Marion Cotillard), in experiments in dreamtime, and as a result lost his life, putting him on the run as a wanted man unable to see his children. She now haunts his psyche as a phantom turned nemesis. You could call her the ghost in the machine but really Mal is a symbol of guilt, loss and self-blame as an avatar, a manifestation of his own psyche punishing itself in the most effective way it knows: not simply to remind Cobb of what happened to her, but to sabotage his capers.

When you add in the complications of dream time (five minutes of reality is about an hour of dream time) which expands exponentially the deeper you create levels of dreams within dreams, and a third layer that plays out like a literal tribute to On Her Majesty’s Secret Service (was this somehow a favorite lodged in the subconscious of one of these subconscious invaders?) it more and more resembles a movie created by the dreamers. You can almost break down the members by craft: Ariadne (Elliot Page) the architect is set design, Arthur (Joseph Gordon-Levitt) functions as a producer, Eames (Tom Hardy) is their star (taking on other identities beyond his own), and Yusuf (Dileep Rao) … well, as the man behind the super duper knock-out drops may not have a direct correlation to the production role but maybe you could call him the exhibitor/projectionist, providing the venue for the dream movie to occur. Only because of the design of his sedative (another narrative construct designed less out of pharmaceutical verisimilitude than dramatic complication), you can’t walk out halfway through the movie: you’re in this to the end credits.

Conceptually it is brilliant, so stuffed with ideas that it becomes more narrative architecture than storytelling, its story and characters sacrificed to the density of rules and limitations and fantastical (meta)physical laws, its dialogue chained to exposition in almost every line. Emotionally, it’s more symbolic than felt. DiCaprio fails to convince us of Cobb’s helpless love for Mal (real or phantom) in his tortured intensity. He can be intense and driven and desperate and reckless, but DiCaprio is not empathic, and he makes no emotional connection to anyone in this film. For all that narrative architecture of classical tragedy, it simply hasn’t any emotion.

Yet I was still enthralled, as involved on a second viewing as I was on the first. Maybe, as they say in the film, an idea really is like a virus. This one certainly got into me, and I think it is because of the very density of plotting and storytelling and narrative interlacing, the plays of realities down through the layers as time slows and the foundation of the dream construct becomes increasingly unstable.

If you want to follow up after watching the film, read my analysis on Parallax View here.

On Blu-ray and DVD from Warner Home Video. The DVD features four brief “Focus Points” featurettes, focusing on “The Inception of Inception,” the castle set, the Escher-like staircases and the freight train through the city. The Blu-ray Combo Pack features these four and ten additional featurettes, which can be viewed individually, straight through as a 44-minute documentary, or dropped into the film in the “Extraction Point Mode,” which interrupts the film and branches off to the individual pieces as they relate to the film. (Because there’s no commentary through the rest of the film, it makes for a narrative interruptus.) Also exclusive to the Blu-ray is the 44-minute documentary “Dreams: Cinema of the Subconscious,” a motion comic book prologue to the film, isolated tracks from the score, and galleries of conceptual and promotional art, trailers and TV spots, along with a BD-Live accessible “Confidential Files” (unavailable at time of review). The two-disc set also includes a bonus DVD and digital copy.