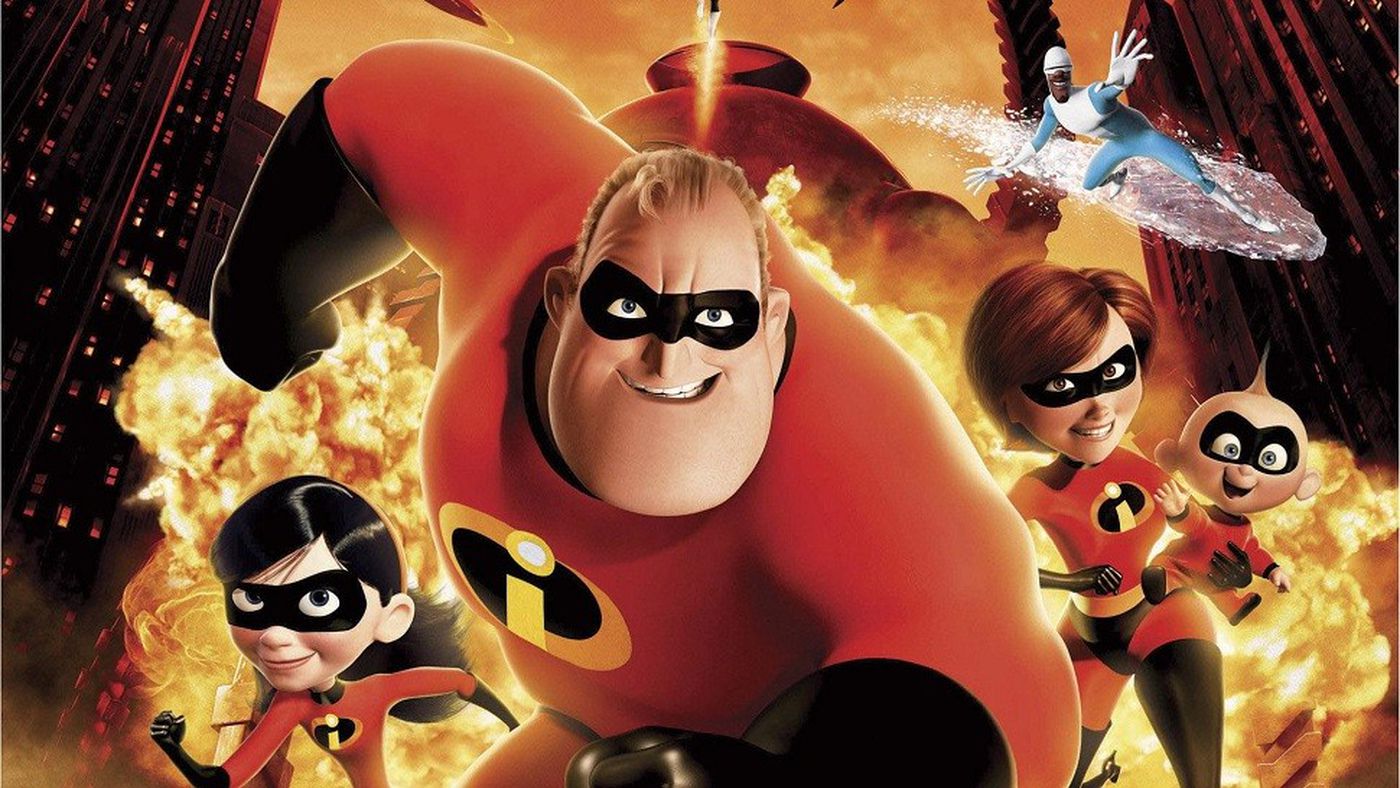 Brad Bird works with the computer animation pros at Pixar for the first (but not the last) time in The Incredibles (2004), which drops cartoonishly exaggerated super-heroics into the typical (by all outside appearances) suburban nuclear family, creating a super-powered dynamo of dysfunction and frustration in hiding (they’re in witness protection from years of personal injury lawsuits against the crime-fighting hero types).

Dad, aka Mr. Incredible (voiced by Craig T. Nelson), is a walking house behind an insurance adjuster’s desk who secretly sets up his neighborhood watch for a taste of the old thrill and Mom, aka Elasti-Girl (Holly Hunter), stays at home to raise a shy teenage girl prone to turning invisible and a rambunctious speed demon son with a penchant for pranks, until a secret organization recruits Mr. Incredible for a return to duty.

Bird gets in plenty of digs about cultural coddling and conformity while creating a familiar family dynamic and then transforms it into a spandex suit version of a seventies James Bond thriller. True to form, Bird doesn’t coddle the audience when it comes to the danger faced by the family when megalomaniac supervillain Syndrome (a young punk who looks like the Heatmiser and is voiced by Jason Lee as a cruel, cocky brat) targets the Incredibles. “They will kill you if they get the chance,” Elasti-Girl cautions her kids in utterly grave tones. “Do not give them that chance.” The brassy score by Michael Giaccino is a perfect Bond-ian pastiche.

It was nominated for four Academy Awards and won two, including best animated feature.

Also on Blu-ray and DVD and on SVOD through Amazon Video, iTunes, GooglePlay, Fandango, Vudu and/or other services. Availability may vary by service.
The Incredibles [Blu-ray]

On Blu-ray and DVD with commentary tracks (one by writer/director Brad Bird and producer John Walker, the other by the Pixar animators), “The Making of The Incredibles,” the Oscar-nominated Pixar short Boundin’ deleted scenes, an alternate opening, a collection of animation bloopers and outtakes, interactive files on all the Supers, character interviews with Mr. Incredible and Frozone, and “Vowellet,” a free form audio essay turned video documentary by voice actress Sarah Vowell.

The Blu-ray debut features a bonus DVD and digital copy, plus two HD discs: one with the movie and select supplements, the other with additional featurettes. “The Incredibles Revisited: Filmmaker Roundtable” (on Disc One) is a lively 22-minute reunion with writer/director Brad Bird, producer John Walker, story supervisor Mark Andrews, supervising technical director Rick Sayre, production designer Lou Romano, character designer Teddy Newton and supervising animator Tony Fucile reminiscing over the production, the creative challenges and their early days in the Pixar family. There is much laughter in their camaraderie. And in addition to the animated short “Jack-Jack Attack” (from the original release, now in HD!) there is the “Jack-Jack Attack Exploded,” a version with commentary and video insets.

The Blu-ray “Bonus Disc” includes the brief, bright bits that enliven Pixar supplements with delightful invitations into their world: “Paths To Pixar: Story Artists” is an introduction to the story artists in their own words, running about five minutes. The rest of the bits are even shorter but pack a lot into their time: “Studio Stories: Gary’s Birthday” tells us how they balanced work with birthday parties, “Ending With A Bang: Making The End Credits” gives us a whirlwind tour through the creation and concepts behind the dynamic end credits art and “The New Nomanisan Island Redevelopment Plan” is a tongue-in-cheek tourism promo for the fictional supervillain island of the film, with a map that offers more gags.