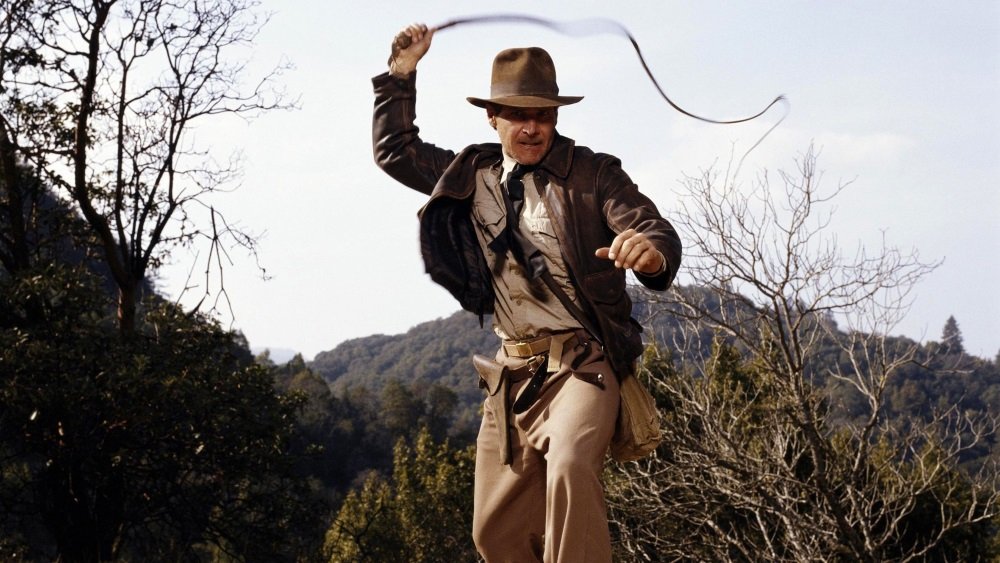 Harrison Ford, fresh from the first two Star Wars films, stepped into the battered fedora and leather jacket of the archeologist adventurer Indiana Jones in Raiders of the Lost Ark (1981, PG, renamed Indiana Jones and the Raiders of the Lost Ark for home video), the rip-roaring tribute to the cliffhanger adventures of the 1930s and 1940s from producer George Lucas and director Steven Spielberg.

These movie brats were feeding their fondness for the pulp action movies of their youth, from the B-movies and cheap serials of kid matinees to the swashbuckling Errol Flynn adventures and the Technicolor splendor of King Solomon’s Mines, and their affection was infectious. The nostalgic trip through yesteryear thrills of non-stop action and skin of the teeth escapes, executed with Spielberg’s filmmaking sophistication and a contemporary tongue-in-cheek sense of humor and driven with runaway momentum, was a blockbuster.

A new franchise was born. Lucas had originally envisioned three films (what is it with Lucas and his trilogies?) and Spielberg helped him see his dream through, beginning with the slapstick romp Indiana Jones and the Temple of Doom (1984, PG). Spielberg misjudges the material a little, bouncing from lighthearted action to (at least for kids) disturbing scenes of human sacrifice that he shoots like searing gothic horror (the controversy over the gruesome nature helped prompt the creation of the PG-13 rating). But if the script is negligible, Spielberg opens the film on one of the most delightful set pieces of his career: a screwball musical number executed with all the energy of a classic madcap thirties comedy.

Indiana Jones and the Last Crusade (1989, PG-13) returns to the mix of pulp thrills and mythic sweep and adds family drama to the mix with Sean Connery as Indy’s father, the gruff, emotionally distant Professor Henry Jones. Set a few years after Raiders, it’s a World War II adventure that takes them into the heart of the Third Reich (and a meeting with Hitler, a perfectly Spielbergian bit of wit and wonder) while racing the Nazis to find the Holy Grail of King Arthur. It’s packed with breathtaking action and thrilling set pieces and the same kind of knowing humor that both acknowledges and embraces the pulp origins.

It should have been the end of it but two decades later, Spielberg and Lucas and Ford, all older if not much wiser, returned with Indiana Jones and the Kingdom of the Crystal Skull (2008, PG-13), a globetrotting adventure set in the fifties that pits Indy against the Red Menace and the Atomic Bomb. This one is a jungle romp with an extraterrestrial twist (they could have called it “Indiana Jones and the Chariots of the Gods”) and a romantic revisit with old flame Marion (Karen Allen, reprising her role from the original Raiders). It’s cool that Harrison Ford plays his age and the film has the good sense to reference it, but for all furious activity, it doesn’t prevent it from feeling a little tired, a little out of breath, a little bit of a rerun.

Also on Blu-ray and DVD, individually and in deluxe box sets (details below), and SVOD through Amazon Video

and other services. Availability may vary by service.
Indiana Jones and the Raiders of the Lost Ark (Special Edition) [DVD]

Indiana Jones and the Raiders of the Lost Ark [Blu-ray]

Indiana Jones: The Complete Adventures came out in 2008 on DVD and on Blu-ray in 2012, which marked the Blu-ray debut of the original trilogy. It is just the kind of set that folks buy Blu-ray players for. Paramount returned to the original elements of the first three films to create fresh 4K scans for new prints and digital masters. It’s not a restoration—there was no damage to repair or missing elements to restore — as much as aggressive preservation: creating the best version of one of their most popular films for theatrical and home video screenings. And that’s what they did. The image is superb, the color pops, and the sound will put your home theater audio through its paces.

The five-disc set offers one disc for each film and a fifth disc with supplements, in a bookleaf case with stiff paperboard slipsleeves rather than trays. Exclusive to the collection is the new “On Set with Raiders of the Lost Ark,” an hour-long documentary directed by Laurent Bouzereau, pieced together from archival on-set footage and interviews and previously unseen outtakes and deleted scenes. No narrator, no framing sequence, just a well-made record of the production from start to finish created completely out of archival materials. Bouzereau is a veteran at these kinds of featurettes and always goes that extra mile for Spielberg projects and this one is no different.

The 1981 made-for-TV special “The Making of Raiders of the Lost Ark” makes its disc debut (it was previously included in a VHS box set in the 1990s) and its video source is definitely low resolution (hello 1981 broadcast quality!) and the 2003 “Indiana Jones: The Making of The Trilogy” (also from Bouzereau) appears to have been cut down into three separate short documentaries (one on each film) and offered along with the 28-minute “The Making of Indiana Jones and the Kingdom of the Crystal Skull.”

Missing are the “Introductions” that producer George Lucas and director Steven Spielberg recorded for the 2008 DVD box set and the 80-minute “Production Diary: Making Kingdom of the Crystal Skull,” plus the galleries from the earlier discs. Whether that matters to you depends on just how much time you expect to dig into the extras. This line-up will be more than enough for anyone but the most obsessive fan.