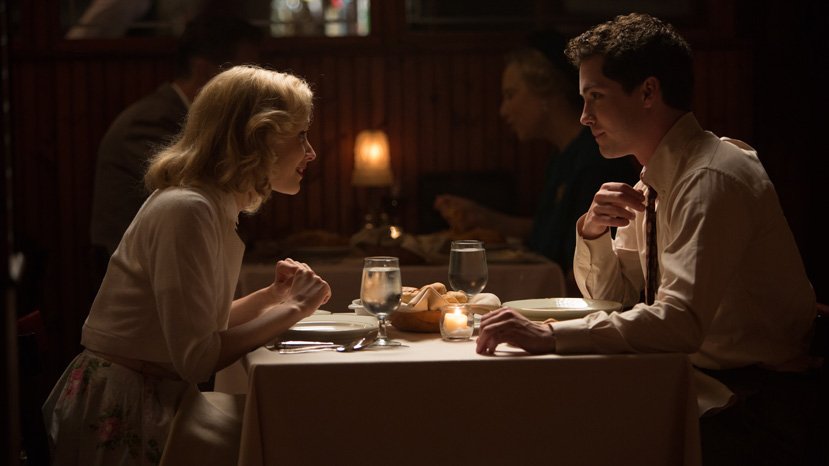 Indignation (2016) – Could you have found a more challenging project upon which to build a directorial debut? James Schamus, the longtime maverick film producer who co-wrote many of Ang Lee’s films, adapts the 2008 Philip Roth novel and directs this measured, serious, heavily introspective coming-of-age drama.

Logan Lerman stars as Marcus, a serious, studious, defiantly independent Jewish college student from working class New Jersey. The son of an overly-protective Newark butcher (Danny Burstein) on a scholarship to a small Ohio college, Marcus is clearly out-of-step with the conformist attitudes of his schoolmates, something that the pious Dean of Students (playwright and stage actor Tracy Letts) seems intent on knocking out of him. Sarah Gadon is superb as the porcelain blond beauty Olivia, a student who seems aloof and distant yet has a sexual confidence that shocks Marcus. This is 1951. The Red Scare is spreading through the country, the Korean War is taking American lives (the film opens on a lonely battlefield death followed by a hometown funeral where Marcus sees a high school buddy into the ground), anti-Semitism hangs on in the culture, and a sexual puritanism is still the order of the day.

Schamus builds this adaptation not just on Roth’s words but on his literary style. The film is essentially a series of conversations that veer into philosophical and moral debates. Marcus is an atheist who believes that his private life and his beliefs are his own affair, and he out-debates the Dean until he lets his emotions rise to surface, a response to his indignation at the invasion of his privacy, but only one of many reverberations of the novel’s title. Schamus lets the conversations play out in extended scenes, the engagement as important as the ideas expressed.

It’s also an interesting recreation of the period, a film both seeped in the era and out of time. The characters at Winesburg College (a telling literary reference in its own right) are always perfectly presented, the details of the well-groomed campus a little too neat and formal and stripped of extraneous clutter, not so much realism as an evocation of unreal expectations and students projecting the face they choose to show the world. Marcus and Olivia are no different, but they manage to push past the surfaces and the prescribed barriers. The performances are precise and the dialogue exacting. Marcus takes pains to express himself clearly and precisely and Olivia hides a troubled past and struggle with depression under a composed public front that projects control and stability. And there’s something about the way Schamus directs his background characters, as simply a part of the sets and settings, that feels like a 1950s movie as seen through modern eyes.

Roth is a difficult author to adapt to the screen; his books are so interior, built on dialogue and reflection and the author’s voice through his characters. Which makes Schamus one of the few writers equipped for such a challenge. He scripted the powerful American drama The Ice Storm and co-wrote Crouching Tiger, Hidden Tiger and Lust, Caution, films steeped in interior lives and unspoken emotional turmoil playing out under the martial arts action and spy movie suspense (respectively), for Ang Lee. He brings that same emotional intensity to this drama, hidden under the social masks and codes of 1950s America, slipping out of conversations fraught with unspoken assumptions and demands. Indignation is a film that hides its drama under a controlled visual style and measured rhythm that proves to be far more evocative than it appears on the surface. Just like the story.

, iTunes, GooglePlay, and other services. Availability may vary by service.
Indignation [DVD + Digital]