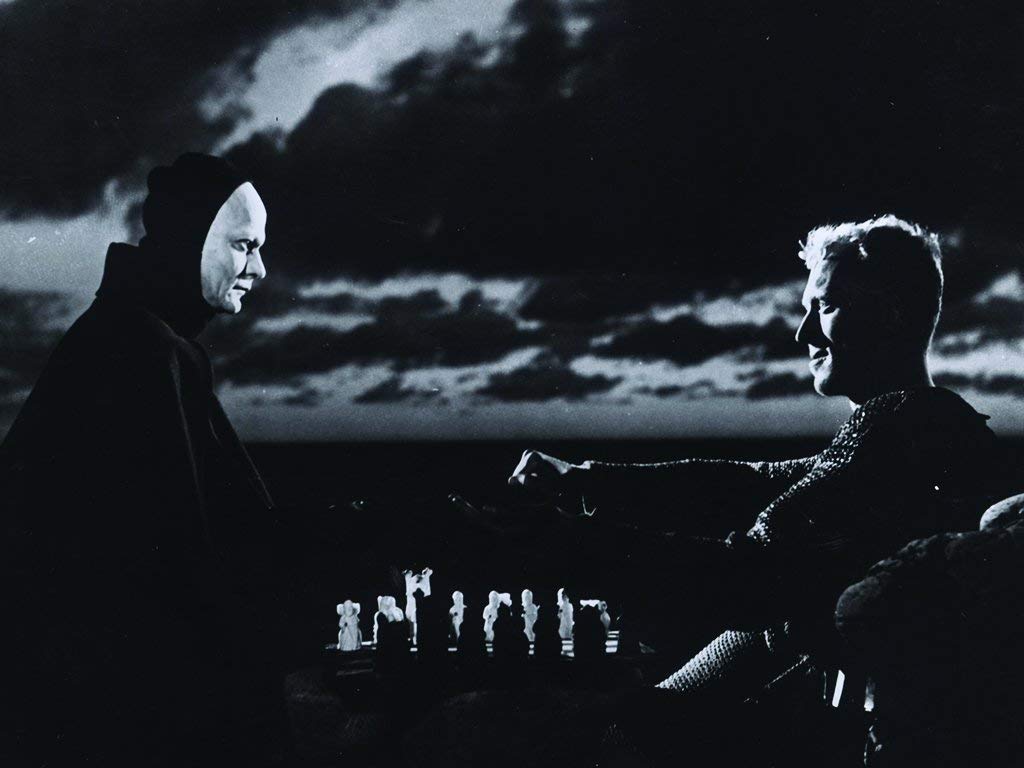 Arguably the most famous of Ingmar Bergman’s films and certainly his most iconic, The Seventh Seal (Sweden, 1957) is Bergman at his most allegorical.

Max von Sydow, young and blond and heroic, is a disillusioned knight returned from the Crusades in a state of spiritual desperation: his faith has been shaken by senseless death and terrible cruelty he’s seen perpetrated in the name of a silent God. Coming home to find his own country ravaged by the Black Plague doesn’t help matters much and as he searches for some sign of a benevolent God, he plays a game of chess with Death (Bengt Ekerot), personified as a cloaked figure with a grim white face. Gunnar Björnstrand is his skeptical squire, suspicious of religion that plays upon and encourages the blind fears of a superstitious population and cynical about a culture that values human life so cheaply.

The landscape in the opening scenes mirrors the harsh reality of his existence: rocky, cold, with jagged cliffs that look torn out of the land, scrub grass hills with scraggly trees. Only in the domestic scenes of Jof (Nils Poppe) and his family, wife Mia (Bibi Andersson) and infant son Mikael, does the sun come out to warm their world with anything close to hope. And it’s that warmth, that hope, that promise of the future the knight sees in their love and their laughing child, that he is able to save by his simple sacrifice.

It’s full of weighty themes of faith and loss, about the meaning of life and the fear of death, with a lugubrious and introspective knight trying to hold onto his idealism in the face of a grim world and an unforgiving existence. And the details are primal and powerful: religion is a grotesquery of death and suffering, the strange and the sick are accused of being in league with the devil and are executed while the trembling devout lash themselves in penitence, offering their suffering as proof of their devotion, or as a sacrifice to a merciless God in exchange for sparing their lives.

Yet there are sparks of light in Jof and Mia and in the ox of a smith whose love and jealousy whip him into blind rages but remains a simple, generous man at heart. And there is also a grim humor in the vaudeville played between the acting company manager and the smith. Watching Death wait for the manager to fake his own demise, only to claim him in a bit of theatrical farce as cheeky as a comic strip gag, is perversely funny.

For all of the quotable dialogue, the definitive line is not a proclamation or a commentary, but a simple exchange between death and the knight: “Do you never stop asking questions?” “No. Never.” That is the meaning I take from his odyssey: not an answer to the knight’s quest for God and the meaning of life, not some riposte to the squire’s suspicion of the church and a religion that plays upon fear, but a perseverance to continue seeking.

B&W, in Swedish with English subtitles

, iTunes, GooglePlay and/or other services. Availability may vary by service.
The Seventh Seal (The Criterion Collection) [Blu-ray]

Seeing The Seventh Seal on the Criterion Blu-ray (mastered from a 2006 Svensk restoration) was a revelation. I never realized what an astoundingly beautiful film it was. Gunnar Fischer’s shadowy black and white brings the life of the landscape out in every frame: the craggy bluffs, the scraggly hills, the cold ocean lapping up to the shores of round stones and boulders. The clarity and intensity of the image pulled me in to the film, as if my TV set had become a window on a world that reached back for miles, for centuries. It grounded the themes in a palpable, solid world, giving the weight of life on the line to the philosophy discussed in the film. The film lived for ninety-some minutes. I was spellbound.

The 2009 special edition release on DVD and Blu-ray feature the previously available commentary by Bergman scholar Peter Cowie plus all new features, including Marie Nyreröd’s feature-length 2006 documentary Bergman Island, built around candid interviews with the director conducted four years before he died. (This documentary is also available separately.) Also features “Bergman 101,” a 35-minute video essay on Bergman’s life and career by Cowie illustrated by stills and film clips, a newly recorded afterward by Cowie, a seven-minute appreciation by Woody Allen recorded in 1998 for Turner Classic Movies (he calls the film “a brilliant and sinister fairy tale”) and a booklet among the supplements.