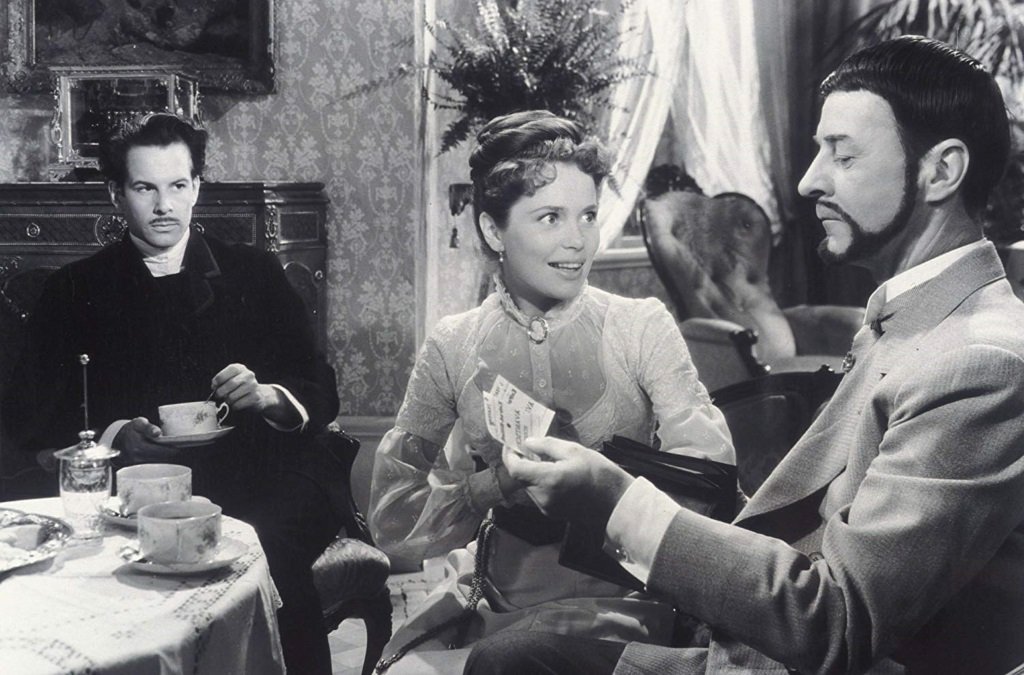 Ingmar Bergman’s reputation is built on a foundation of introspective human dramas and personal crises steeped in philosophical discussions, conversations that scrape tender emotions and troubled relationships laid bare. And yes, his career is filled with such cinema, much of it dark, most of it very serious and all of it (to a greater or lesser extent) exploring his ideas of drama, art, love and the complexities of human existence.

Yet the film that first brought Bergman to international attention in 1955 was neither dour nor dark. Smiles of a Summer Night (Sweden, 1955) is a light, sunny, airy sex comedy, like a Swedish version of a sly Ernst Lubitsch satire of love and class and sex by way of a Shakespeare comedy of mismatched couples reshuffled through the film. It largely plays out at a weekend retreat in the country manor of beautiful (and somewhat notorious) stage actress Desiree (Eva Dahlbeck), or rather her worldly mother (Naima Wifstrand), something of a social courtesan in her day (“My dear daughter, I was given this estate for promising not to write my memoirs”).

She invites Fredrik (Gunnar Björnstrand), an old lover with whom she has recently reconnected, along with his much, much younger wife (Ulla Jacobsson) and troubled son (Björn Bjelfvenstam), a divinity student with very worldly concerns, notably a tormenting attraction to his stepmom. To stir it up, she also invites her current lover, the married Count Carl Magnus Malcolm (Jarl Kulle), and his wife (Margit Carlqvist), who connives to help Desiree reshuffle the pairs to their desired outcome. Bringing the sextet up to an octet is Fredrik’s earthy young maid (Harriet Andersson) and Desiree’s hearty groom (Åke Fridell). While Desiree’s mother provides the witty commentary to the awkward dance, the unfettered attraction and physical indulgence of the servants offers a refreshing simplicity to love and sex beyond these social creatures.

It’s all very warm and witty and played like an elegant stage farce, with Bergman’s usual introspection playfully debated with witticisms and banter. The men are egotistical fools (“I can tolerate my wife’s infidelity, but if anyone touches my mistress, I become a tiger”) and the women worldly veterans of disappointing loves (apart from the girlish young wife, still a virgin and an optimist). But there is also a vulnerability in the aging Fredrik, who adores his young wife but yearns for a grown-up relationship (and a sex life), and to Desiree, tired of a life of temporary affairs and shared lovers. While she’s the glamorous (and perhaps notorious) star on tour, she seeks stability and comfort at home, where she is also mother to a young son (named Fredrik, much to the adult Fredrik’s alarm… and perhaps pride). It’s a very human comedy, built on the fragility of ego, the confusion of desire and the wonderful illogic of love.

B&W, in Swedish with English subtitles.

Also on DVD and Blu-ray in a deluxe Criterion edition and on SVOD through Amazon Video, iTunes, GooglePlay and/or other services. Availability may vary by service.
Smiles of a Summer Night (The Criterion Collection) [Blu-ray]

Smiles Of A Summer Night (The Criterion Collection)

Criterion originally released the film to DVD in 2004. The 2011 Blu-ray debut includes the supplements originally presented with that release: a video introduction by director Ingmar Bergman, a video conversation with film historian Peter Cowie and writer Jorn Donner (who was the executive producer on Bergman’s “Fanny and Alexander’) and the original Swedish theatrical trailer. The 24-page booklet features an essay by theater and film critic John Simon and a reprint of Pauline Kael’s 1961 review. You can read them both in their entirety at the Criterion Current: John Simon here and Pauline Kael here.