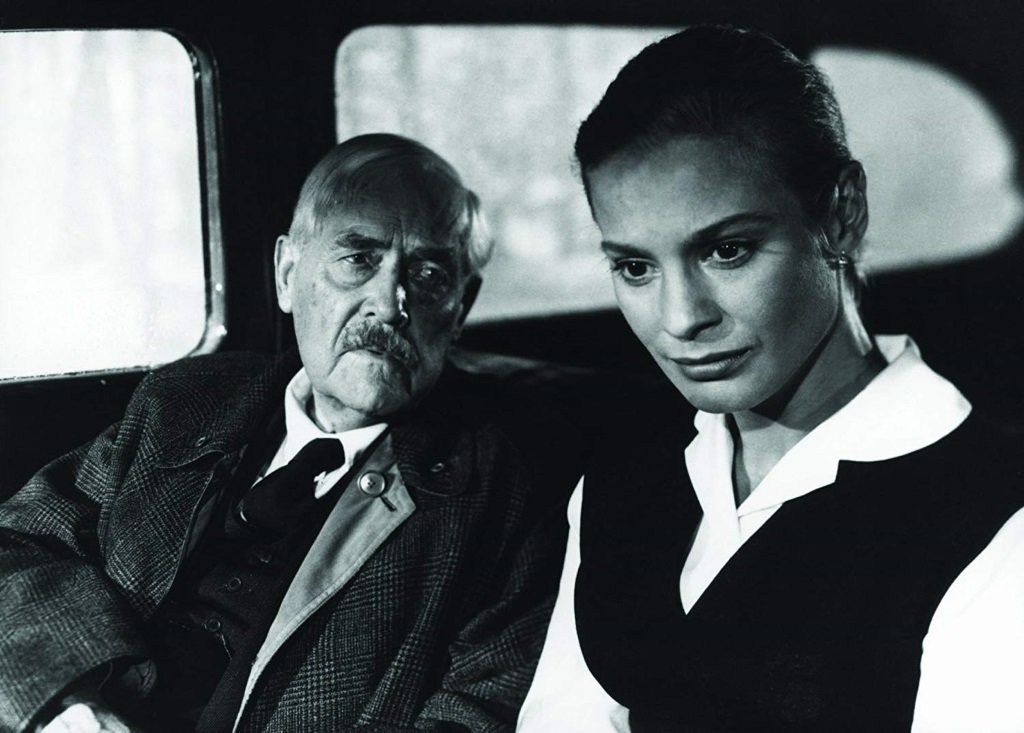 In Wild Strawberries (Sweden, 1957), Ingmar Bergman takes that most venerable of modern genres, the road movie, and transforms it into the contemplative journey of an aging professor into his unexamined past.

Victor Sjöström, one of the great Swedish director of the silent era as well as an actor (and one of Bergman’s heroes), was coaxed out of retirement to play the fragile old man being presented with an honorary doctorate in the college town of Lund, and Bergman pays tribute to the director in a nightmare scene where he wanders through a sun-seared yet ghostly village, and the silent movie-like sequence with the driverless hearse carrying the corpse of Isak himself through the streets recalls Sjöström’s 1921 masterpiece The Phantom Carriage, a personal gesture from one artist acknowledging his debt to another.

The nightmare shakes up the doctor, who impulsively decides to drive to the ceremony instead of flying. Thus the old man, accompanied by his daughter-in-law Marianne (Ingrid Thulin, in her first Bergman film), embarks on his own road movie. Bergman turns the trip into a contemplative journey through both his unexamined past and a modern world where the relationships, mistakes, and regrets of his life are played out by the characters he meets along the way. There’s also a stop along the way to revisit his family’s vacation home, a seaside villa where he spent his summers as a boy and “the place where wild strawberries grow.” His childhood memories come alive, recalled with a mix of sunny wistfulness and bittersweet regret, a time of innocence and potential and puppy love.

It’s an often painful drama and Sjöström gives a vulnerable, moving performance as the crotchety, morally imperious old man who slowly realizes the effect his inflexibility and hard demands has had on those around him, but it’s also one of Bergman’s warmest, most understanding, and most beautiful films. Thulin’s daughter-in-law is also his the passenger and nudges him along the craggy trail to self-awareness and Bibi Andersson is the love of his early life, revisited in musings and dreams, and the freewheeling modern hitchhiker he meets on the road.

It’s photographed with a delicacy and lightness by Gunnar Fischer, Bergman’s cinematographer before Sven Nykvist recast the films in his defining cold winter light. Fischer had a talent for bringing out the beauty and the aliveness of the outdoors as well as the most delicate details of the faces of actors, something the newly remastered Blu-ray reminds us in every shot. You can almost see the years in the worn landscape of Sjôstrôm face in the opening shots, and as Isak drifts back to his youth, his age is thrown into even sharper relief by the bucolic freshness of the forests and meadows of this summer Eden. It’s airy and sunny and alive and, surrounded by the beauty of this rural Eden, we are reminded of the better angels of our natures.

Set in the present but tied to a past viewed through the lens of remembrance and dream, Wild Strawberries is more melancholy and introspective than the sunny, airy sex comedy Smiles of a Summer Night (1955) before it and more hopeful and self-reflective than the dark medieval allegory The Seventh Seal (1957) after. It is also more autobiographical, with details of aging protagonist Isak Borg’s past drawn from Bergman’s own childhood. To what extent Isak or his emotionally closed in son Evald Borg represent Bergman himself is open to question (he claimed Evald was based on his father), but such concerns are secondary to the film itself, an often painful drama but one of Bergman’s warmest and most touching films.

B&W, in Swedish with English subtitles

Criterion originally released the film on DVD in 2002 in a gorgeous transfer. The 2009 Blu-ray, mastered from a 2k digital transfer, is downright stunning, with amazing detail and texture, and it reminds us that, before Sven Nykvist shadowy work, Gunnar Fischer brought an Eden-like quality to the outdoors of Bergman’s films.

New to the disc is an introduction by Bergman shot for Swedish television and behind-the-scenes footage from the set shot by Bergman, and carried over from the previous DVD release are thoughtful and illuminating commentary by Bergman scholar Peter Cowie and the 90 minute documentary “Ingmar Bergman on Life and Work” by Jörn Donner. The booklet features a new essay by film scholar Mark Le Fanu.