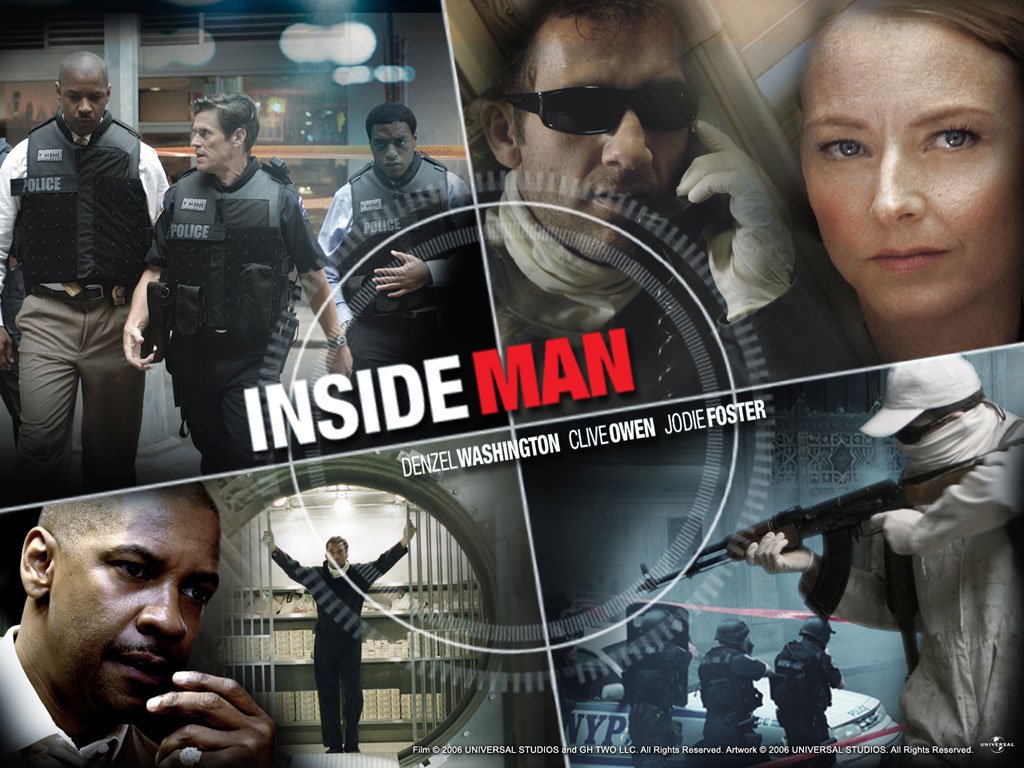 Inside Man (2006) isn’t the kind of film you expect from Spike Lee, who has always favored conversation over action. That’s part of the pleasure.

It’s a high concept heist thriller starring Clive Owen as the brains behind a bank robbery turned hostage situation and Denzel Washington as the presiding NYPD Detective on the scene, with Jodie Foster riding in as a power broker trying to manage the situation for unnamed folks with their own agenda. Spike didn’t develop the film and it doesn’t seem to play to his strengths yet it’s a perfect crucible for the director to explore his pet themes of race and class in the lumpy melting pot of New York City and a great set-up for what he does best: tossing characters together and letting cultural opposites clash, argue and vent, not to solve issues but to air them.

But Spike also proves that he can execute a slick, effective genre piece, something he’d never attempted before this film. He gets excellent support from cinematographer Matthew Libatique, who mixes a handsome, formal style and an agitated handheld immediacy very well, and longtime editor Barry Alexander Brown, who helps Spike rev the film up and bring it back down with his pacing. They create a mindgame of a crime thriller that gets more intricate with every twist, a terrific work of sleight of hand engineered by Owen’s calculating mastermind. And if the script never quite seems to justify the sudden appearance of Foster’s character, called in by uber-billionaire Christopher Plummer to protect his Maguffin from being stolen/revealed/whatever, the way she bulldogs her way through the movie with nothing but presumed social power and confidence she wears like a suit almost pre-empts such questions.

Yet in Spike’s hands it turns into something else as well, a crime film that bubbles up out of the racial stew of NYC. He fills the drama around the plotting with terrific snapshots of New York characters, all with edges to them that suggest there’s more to their story that we’ll never find out. We got a beat cop whose dialogue is full of offhanded slurs (“You think you can leave out the color commentary?”), a loud Brooklyn girl with a great chest who can’t keep her cell phone conversation down in the bank, a young black kid whose PSP has an absurdly violent ghetto gangster game on it, a Sikh identified loudly as “an Arab!” when he’s let out of the bank and assumed to be a Muslim by the cops, an old Jewish man with a yarmulke and a connection to the diamond business, and others that both fall into familiar stereotypes and defy them.

Say what you will about Spike’s past public comments about race in America, he is smart about presenting it onscreen and the added dimension of professional brotherhoods (amongst both the cops outside the bank and the criminals inside) merely provides subtler and spicier flavors to the lumpy melting pot. Even with all the strong reviews it earned on its theatrical release, I never thought it received the full credit it was due. It’s smart, it’s sly, it’s witty, and it keeps you riveted all the way to the end.

, iTunes, GooglePlay and/or other services. Availability may vary by service.
Inside Man [DVD]