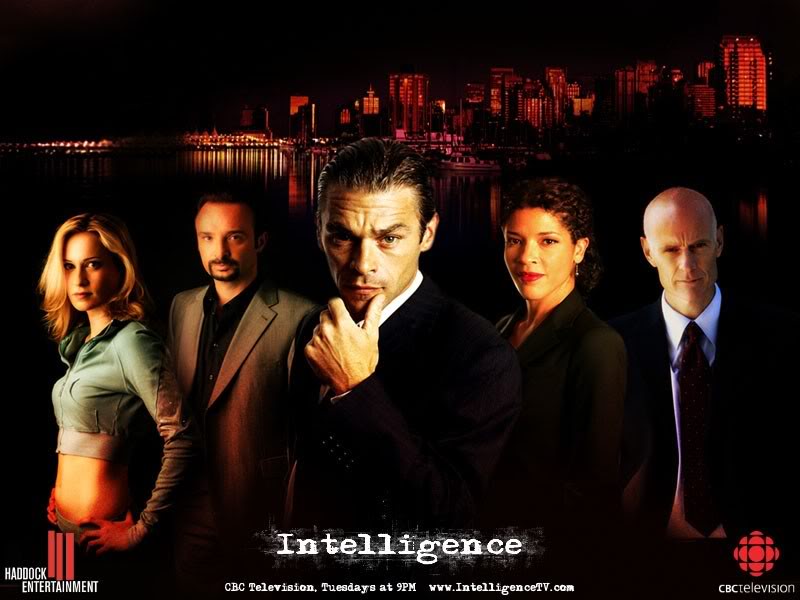 Created for Canadian TV by Chis Haddock, Intelligence: Complete Series (2006-2007) is a smarter and more sophisticated crime drama than the American counterparts of its era, cleverer in its tangle of narratives and less showy in its visual style.

Set in Vancouver, B.C., a central hub for shipping between Canada, the U.S., Asia, and points beyond and the major western border crossing between the U.S. and Canada (as well as the home of Haddock’s previous series, Da Vinci’s Inquest), Intelligence is a domestic espionage show about the ground work of intelligence agents after the kind of international crime that Jack Bauer was too busy to bother with: gun running, drug smuggling, human trafficking. It’s also about the workings of local crime with international reach, in particular low-key Vancouver crime boss and marijuana smuggler Jimmy Reardon (Ian Tracey, of Da Vinci’s Inquest and Continuum), who plays informant for the ambitious head of the Organized Crime Unit, Mary Spaulding (Klea Scott, from the third season of Millennium) in a quid pro quo exchange of information.

Jimmy steers clear of hard drugs and not just for moral reasons; it brings increased scrutiny from local and national law enforcement and violence. So ratting out the coke and meth dealers is a no brainer for him and the bottom line of his business. Mary, meanwhile, is making a play to step up to the Canadian Security Intelligence Service (CSIS), and discovers more intrigue inside the office than on the streets: what she thinks is a mere leak turns out to be a sieve pouring out information to the US, China, Russia, and who knows where else.

At stake is 1) the tenuous balance of criminal power that Jimmy keeps in check (which in turn keeps Vancouver streets relatively free of drug gang violence), and 2) government agencies filled with agents and political players more beholden to American agencies and corporations than their own country. The superb writing keeps it grounded in a reality where officials wait on information to work its way through the chain of command and agents and smugglers survive without the kinds of high-tech toys and glamorous weapons systems available to their counterparts on American TV.

There’s also a fascinating evolution of characters through the two seasons. Jimmy’s screw-up brother Michael (Bernie Coulson, who bears a slight resemblance to Chris Penn) actually mans up in the course of the first season and proves to have real native intelligence and arrogant Organized Crime Unit Detective Ted Altman (Matt Frewer), a rogue with his own agenda who happily conspires with the CIA, undergoes a dynamic and completely believable transformation when he becomes part of a real team with a real leader and he returns the respect with loyalty and good work. The show doesn’t make a big deal of it and leaves it to the subtle but strong shifts in Frewer’s performance to tell the story of the transformation.

But perhaps what I appreciate most is the relationship between the Canada and the U.S. as seen from the Canadian perspective. The United States makes a show of egalitarianism and partnership, but its every action is about profit and economic control: politically (the U.S. has moles all over CSIS and has bribed politicians in every level of government), privately (the machinations of an  American-owned multinational has very troubling ties to American intelligence) and criminally (just as Mary uncovers the corporate conspiracy, Jimmy finds American drug gangs moving over the border and trying to muscle into the Vancouver street business). The series was cancelled before these storylines could be fully played out, but Haddock and his collaborators had already laid in persuasive suggestions that all of these powers were intertwined at some level, and they all shared a common purpose. CSIS was a small fish taking on the sharks in the intelligence community, but it was taking them on and making headway with a mixture of tenacity, a show of international cooperation and good luck. If it wasn’t completely convincing, it made for a nice underdog story in a completely convincing portrait of Canada’s international position in world politics and economics.

Intelligence ran for two seasons on Canadian TV, a mere 25 episodes that came to an end in 2007. It won a handful of Canadian awards, and deservedly so. It is gripping viewing thanks to sharp writing that transforms what could be the mundane details of communication and diplomacy in both the streets and the political arena into a complex web of feints and threats and power plays. It’s more The Wire than 24, admittedly not as ambitious or sprawling or dense with characters and stories, but just as methodical and full of shades of gray and levels of compromise on both sides of the law. And at the heart of it all is the tricky symbiotic relationship between Jimmy and Mary.

, iTunes, GooglePlay and/or other services. Availability may vary by service.
Intelligence: Season 1 [DVD]