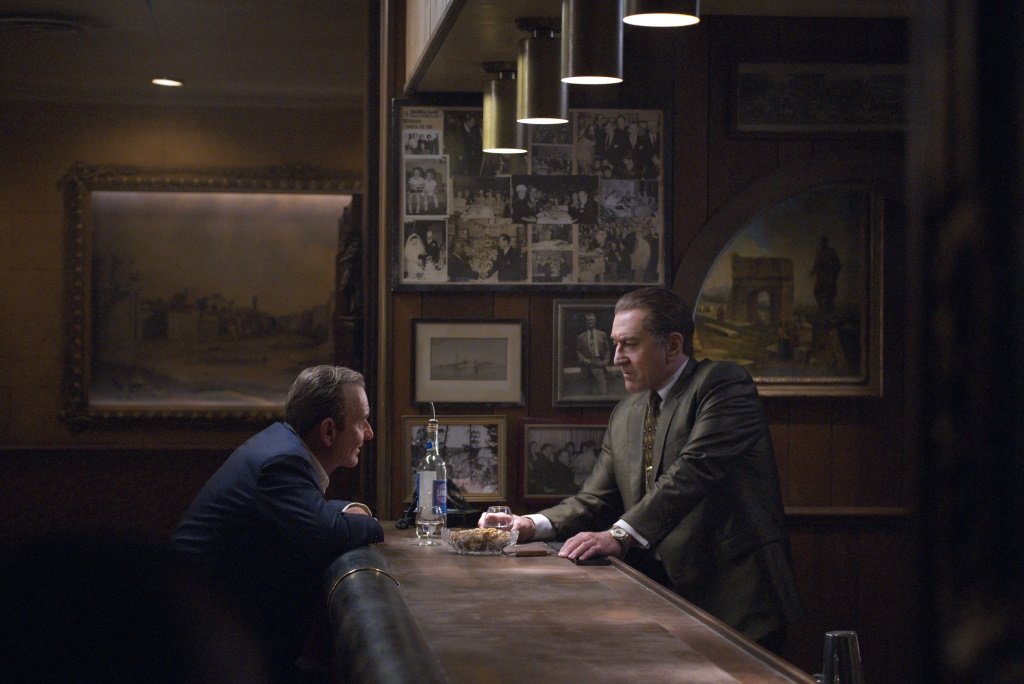 After the major film studio passed, Martin Scorsese turned to Netflix to finance “The Irishman” (2019, R) his latest and last mob epic and a long-awaited reunion with actors Robert De Niro (their first collaboration in over 20 years), Joe Pesci, and Harvey Keitel. De Niro delivers his most committed and moving performance in decades as Teamster turned mob hitman Frank Sheeran, Pesci (lured out of retirement) offers quiet power and gravitas as the mobster who recruits Frank, and Al Pacino turns down his usual volume to play Jimmy Hoffa. Scorsese plays down the cinematic fireworks for a melancholy portrait of a man who loses his compassion and his family in a life of impersonal violence. Now on Netflix after a brief theatrical run.

Adam Driver plays the congressional aid assigned to investigate the use of “enhanced interrogation techniques” (aka torture) in the post-9/11 war against terror in “The Report” (2019, R). Scott Z. Burns (screenwriter of “The Informant!” and “The Laundromat”) writes and directs this season’s deep dive into real-life government scandal and cover-up, effectively dramatizing a complicated subject, and a superb cast helps him, including Jon Hamm, Corey Stoll, and Annette Benning as Dianne Feinstein. Streaming on Amazon Prime Video after a brief theatrical run.

Also new to Amazon Prime is “Brittany Runs a Marathon” (2019, R), a comedy about self-esteem, self-image, and commitment starring Jillian Bell in the title role. The marathon of the title is a symbol of sorts, but it is also a physical challenge to be conquered.

A severed hand goes on an odyssey to reunite with the rest of itself in “I Lost My Body” (France, 2019, not rated), an offbeat, fable-like animated film based on a novel by “Amelie” author Guillaume Laurant. Dev Patel, Alia Shawkat, and George Wendt headline the English language voice cast. Streaming on Netflix.

Holiday trimmings: Romany Malco is a radio DJ and single father in the family comedy “Holiday Rush” (2019, not rated) on Netflix, and James Corden and Lana Del Rey are guests on “The Lacey Musgraves Christmas Show” (2019, TV-Y) on Amazon Prime Video.

Free pick: “Tel Aviv on Fire” (Palestine, 2018, not rated, with subtitles) uses comedy to look at the tensions in modern Israel. On Kanopy, a free streaming service available through most library systems.

Cate Blanchett stars as the wife and mother swamped by life and struggling to find her happiness in “Where’d You Go, Bernadette” (2019, PG-13), Richard Linklater’s disappointing adaptation of Maria Semple’s hilarious novel.

Available same day as select theaters nationwide is the animated adventure “Away” (Latvia, 2019).

Dennis Quaid stars in the holiday-themed sitcom “Merry Happy Whatever: Season 1” as the strong-willed father who meets the new boyfriend (Brent Morin) of his youngest daughter (Bridgit Mendler) over a long Christmas visit. 8 episodes now streaming.

“The Feed” offers a near future where people can plug their minds directly into the data network, and the reverberations of a power struggle within the family that controls it all. David Thewlis and Michelle Fairley star in the Amazon Original science fiction series. 10 episodes.

Werner Herzog directs and narrates “Meeting Gorbachev” (2019, TV-PG), a documentary portrait of the final leader of the Soviet Union.

Paul Dano and John Cusack play Brian Wilson (young and middle-aged) in “Love & Mercy” (2015, PG-13), a perceptive and engaging drama about the rock legend’s odyssey from visionary creator to troubled, drug-addicted prisoner of a controlling therapist.

Streaming TV: Zachary Quinto plays an immortal who feeds on the souls of children in the horror series “NOS4A2: Season 1,” adapted from the novel by Joe Hill.

A family faces dark, twisted, shadow versions of themselves in Jordan Peele’s eerie, ambitious “Us” (2019, R). Like his horror-satire hit Get Out, it’s a wicked piece of social commentary through a horror movie lens, but this takes on a much bigger scope, which is some ways is more interesting and in others less satisfying, especially when Peele explains the backstory of the shadow versions. It makes for a kind of dark “Twilight Zone” reality that doesn’t hold up to the scrutiny of feature-length film, but offers some brilliant scenes and provocative ideas on social opportunity and anger among the disenfranchised. Lupita Nyong’o and Winston Duke star as the protective parents and Elizabeth Moss has a delicious supporting role as a catty best friend and her gleefully sadistic double.

True stories: “Lindsey Vonn: The Final Season” (2019, TV-PG) follows the Olympic skier as she competes in her final world championship.

Pixar’s Oscar-winning animated feature “Coco” (2017, PG) draws from Mexican folklore and music for the colorful adventure of a boy’s journey through the Land of the Dead to contact his ancestors.

Raphaël Balthazar plays an unconventional forensic pathologist in the mystery series “Balthazar: Series 1” (France, with subtitles), one of the top rated dramas in France. It makes its U.S. debut on Acorn TV, which also has new seasons of “The Good Karma Hospital” and “Mount Pleasant” and the second season of the superb Canadian comedy “Slings & Arrows.”

“The New Nurses: Season 1” (Denmark, with subtitles) offers an interesting twist on the classic hospital drama; it follows the first class of men admitted to the nursing ranks in 1950s Denmark. It streams on foreign language TV service MHz Choice, as does the crime comedy “Triggermen: Season 1” (Sweden, with subtitles).

Criterion Channel offers movies about food, shared meals, and the joys of eating with a cinematic buffet of a dozen choice dishes, from “Tom Jones” (1963) and “My Dinner With Andre” (1981, PG) to “Tampopo” (Japan, 1985, not rated, with subtitles) and “Big Night” (1996, R), starring Tony Shalhoub and Stanley Tucci restaurateur brothers in 1950s New Jersey.

And for a holiday movie for all seasons, “Meet Me in St. Louis” (1944) is a nostalgic musical starring Judy Garland and Margaret O’Brien and featuring “The Trolley Song” and “Have Yourself a Merry Little Christmas.”