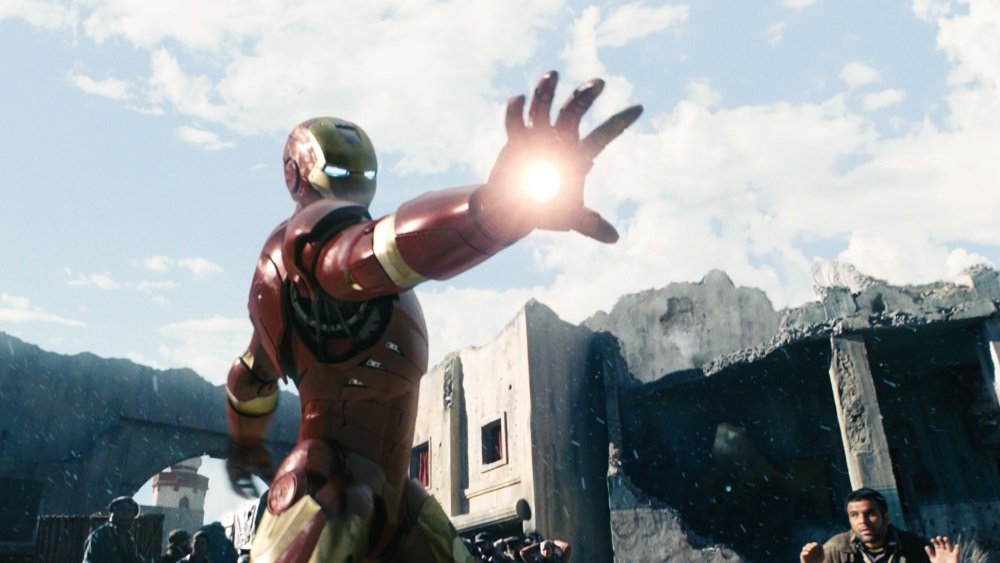 Iron Man (2008) is a superhero in both the mythic mode and the modern world, the hero felled by his own arrogance and revived with an Achilles heel. Behind the mask of the heavy-metal superhero is a playboy gazillionaire and armaments mogul with a bad heart and a high-tech pacemaker that powers not just his bum ticker but an entire jet-propelled exo-skeleton crammed with weapons.

Robert Downey Jr. plays the glib playboy on the road to maturity, dancing through the role of magnate Tony Stark with the deftness of a maverick character actor who adds eccentric flourishes and cocky charm to the classically choreographed steps of the leading man hero. And the special effects are as energetic as they are impressive, which almost masks the otherwise obligatory turns of the plot into a smackdown between Iron Man and a bigger, meaner robo-suit. Jeff Bridges plays his corporate partner turned nemesis, Terrence Howard his military babysitter, and Gwyneth Paltrow his adoring girl Friday, Pepper Potts.

Directed by Jon Favreau (who also takes a supporting role as Stark’s chauffeur Hogan), Iron Man set the tone, style, and sensibility of the Marvel Comics movie universe. It’s faithful to the comic origins without being slavish, draws ideas from the entire run of the series, and stirs a self-aware sense of humor through the action while still taking the enterprise seriously. And the post-credits scene—a tradition founded in this film—introduces Col. Nick Fury (Samuel L. Jackson) and lays the groundwork for The Avengers, even before any of the other Avengers (The Hulk excepted) have gotten their movie introduction.

This is ground zero for the big screen MCU.

It was nominated for two technical Academy Awards.

and other services. Availability may vary by service.
Iron Man [DVD]

The single-disc DVD comes with deleted and extended scenes (including an alternate ending to the climactic big suit battle), but the “2-Disc Ultimate Edition” DVD and Blu-ray release are both packed with extras. “I Am Iron Man” is a 110-minute chronicle of the film from pre-production through rehearsal and shooting to digital effects and post-production, filled with great footage of suit tests and rehearsals and Downey learning to be an action hero. There are separate featurettes on the character history in the comic book background and on the visual effects, plus Downey’s screen test (priceless), more rehearsal footage (Downey and Bridges working out a scene – master class stuff), galleries of art and production photos and the Onion video news parody “Wildly Popular Iron Man Trailer to be Adapted into Full Length Film.” Exclusive to the Blu-ray disc is the interactive “Hall of Armor” gallery with 360 degree tours of the various armor designs of the film. There’s no commentary, but given all the information overload available that’s hardly a complaint.