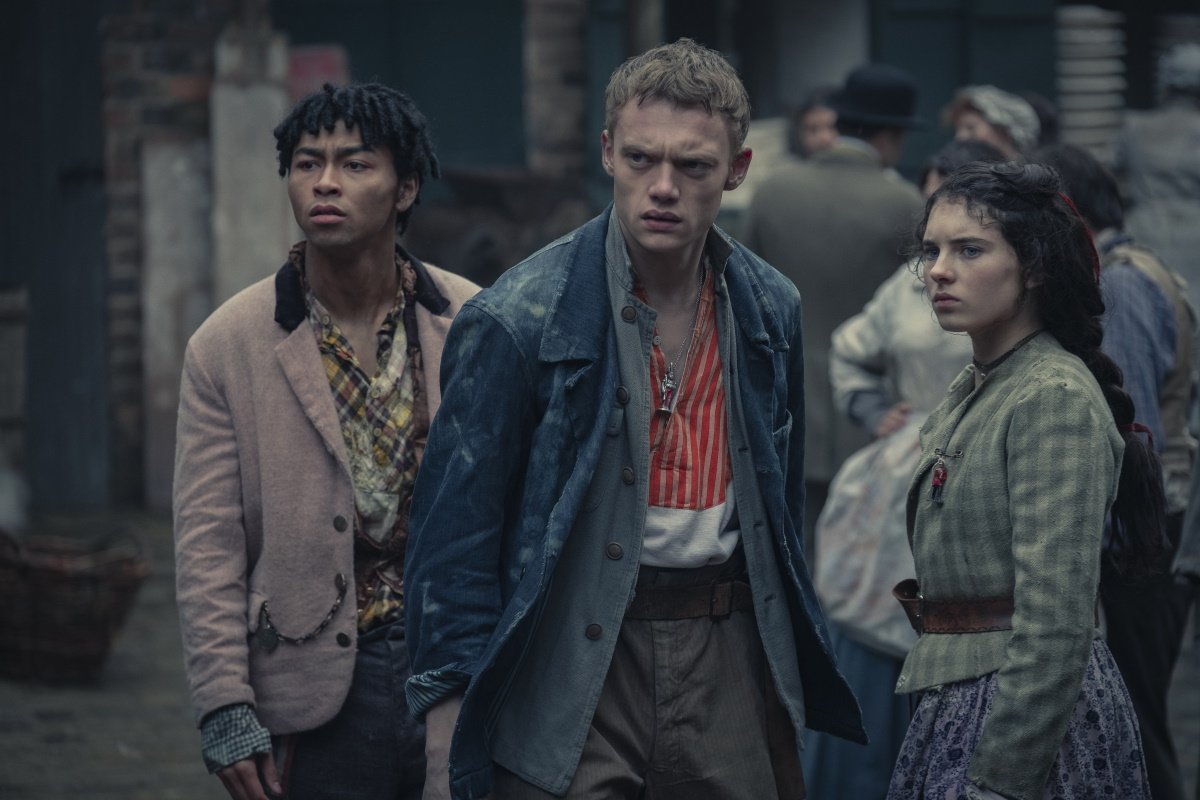 Anthony Hopkins stars a lively 80-year-old widower defiantly holding on to his independence as his mind begins to falter and Olivia Colman is the loving daughter watching him slip away in “The Father” (2020, PG-13). The debut feature from celebrated French playwright Florian Zeller (who adapted his own play with Christopher Hampton) was nominated for six Academy Awards, including picture, screenplay, and acting nods for Hopkins and Colman. (VOD and Stream On Demand)

“The Irregulars: Season 1” (TV-14) puts a twist on the Sherlock Holmes stories by making the genius detective (played by Henry Lloyd-Hughes as a troubled recluse) a supporting character in the drama of the Baker Street Irregulars, the street urchins who became his intelligence network. This version tosses in a supernatural twist (one girl can see dead people) and reimagines the loyal John Watson (Royce Pierreson) as a sinister, controlling figure. (Netflix)

The animated superhero show “Invincible: Season 1” (TV-MA), based on a comic books from “The Walking Dead” creator Robert Kirkman, follows a seventeen-year-old son (voiced by Steven Yeun) of the most powerful hero on the planet (J.K. Simmons) who discovers dark secrets of the family legacy when he develops powers of his own. It’s the second Amazon Original series to use extreme violence and dark humor to deconstruct the superhero genre. Also features the voices of Sandra Oh, Mark Hamill, Seth Rogen, Zazie Beetz, Walton Goggins, and Gillian Jacobs. (Amazon Prime)

Cyntha Erivo powers the limited series “Genius: Aretha” (TV-14) with her performance as the Queen of Soul. The third season of the National Geographic Channel anthology series focuses on the life and career of Aretha Franklin during her most creative period, from the early sixties through the eighties. Written by Pulitzer-winning playwright Suzan-Lori Parks, it also stars Courtney B. Vance, David Cross, and T.I. All episodes now streaming. (Hulu)

The six-part limited series “John Wayne Gacy: Devil in Disguise” (2021, not rated) raises questions in the case of one of America’s most notorious serial killers, looking at evidence that may have been ignored or suppressed and making the case for victims not yet discovered. (Peacock)

In the intimate documentary “Demi Lovato: Dancing With the Devil” (2021, not rated), the pop star opens up about addiction and the overdose that nearly killed her. It streams on YouTube in four installments (ad-free for YouTube Premium subscribers).

The science fiction thriller “Doors” (2021, not rated) upends life on Earth when alien portals open all over the world.

The Danish ambassador (Ulrich Thomsen) fights the Nazis from his American post in the World War II drama “The Good Traitor” (Denmark, 2021, not rated, with subtitles), which won three Danish Film Awards.

Two young adult romantic dramas debut. The faith-based “A Week Away” (2021, TV-PG) is a musical at a Christian summer camp and “Caught by a Wave” (Italy, TV-14, with subtitles) follows a teenage couple as a summer camp romance in Sicily gets complicated by real life.

Judi Dench is an elderly Irish woman searching for the son she was forced to give up for adoption when she was an unwed teenager in “Philomena” (2013, PG-13). Steve Coogan costars in the drama, which is based on a true story.

“Croupier” (1998, not rated) stars Clive Owen as a would-be author and self-loathing casino dealer who narrates his own story of obsession.

True stories: “Seaspiracy” (TV-14) documents the damage that humans do marine life and the corruption that enables it to continue.

International passport: man (Eduardo Sandoval) digs through the lies of his corrupt family to find his sister’s killer in the murder mystery “Who Killed Sara?: Season 1” (Mexico, TV-MA, with subtitles). Also new:

Animation: “Black is Beltza” (Spain, 2018, with subtitles, TV-MA) follows the odyssey of a young Basque artist in 1965 New York as he confronts racism. Also new is “DOTA: Dragon’s Blood: Season 1” (TV-MA), an adventure fantasy inspired by the video game.

A Mexican entrepreneur and a Spanish widow collide on a struggling Andalusian vineyard in “La Templanza: Season 1” (Spain, with subtitles), a sprawling romantic drama set in 1860. Based on the novel by Maria Duenas.

“Collective” (Russia, 2019, not rated, with subtitles) was nominated in both documentary and foreign language feature categories

“The Restaurant: 1951” (Sweden, TV-14, with subtitles), the short fourth season of the family drama, follows the Löwander family managing a restaurant in the Stockholm archipelago for the summer season. All four episodes available to stream.

An Israeli musician (Elie Ben-David) struggles to hold onto his identity when his wife (Héloïse Godet) gets a job as an attaché with the Israeli foreign service in Paris in “The Attaché: Season 1” (Israel, not rated, with subtitles). All ten episodes now streaming.

“Cypher: Season 1” (TV-14), a thriller about an FBI crypto-analyst targeted by the bad guys, is the first original series from The Roku Channel.