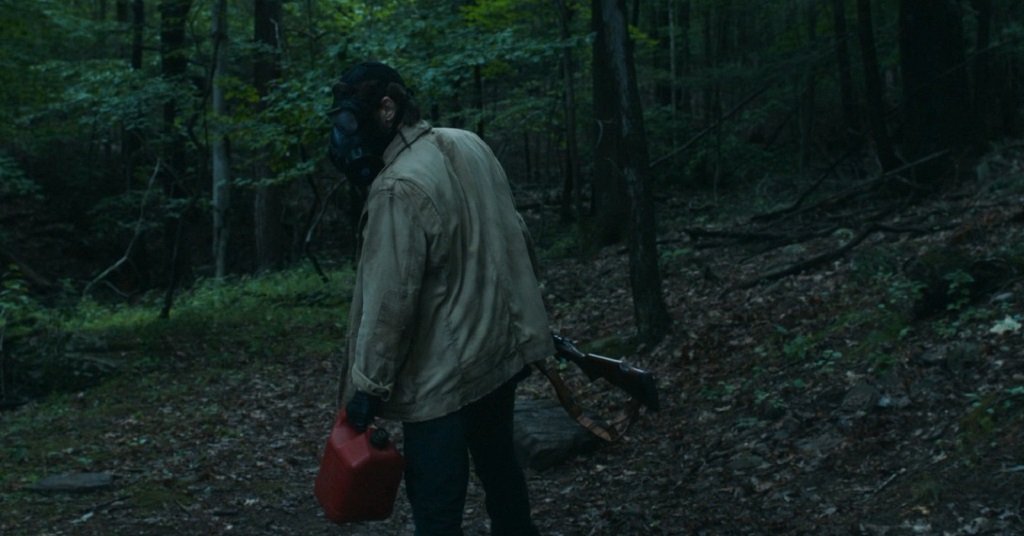 The title of It Comes at Night (2017) sets certain expectations. What exactly comes at night? But the survival thriller from writer/director Trey Edward Shults, set sometime after the ravages of an unnamed and unexplained plague have ripped through the cities and sent survivors into the isolation of the wilderness, isn’t about monsters (human or otherwise) who hunt in the dark. It’s more insidious than that, which is what makes it so unsettling and unnerving.

Our first image is of man, diseased and unable to speak, expiring as figures hidden behind gas masks try to comfort his passing. It’s both tender and alienating, a teary farewell turned mercy killing by terse, protective Paul (Joel Edgerton) and his wife, Sarah (Carmen Ejogo), and their 17-year-old son, Travis (Kelvin Harrison Jr.), and Shults continues directing in that vein. Everything is off-balance, the familiar always on edge. Their country home in the lush green forest has been boarded up and turned into a fortress, the gentle days are under constant threat of pillager and armed invaders, and the nights are plunged in isolation where every sound is a potential attack. So when they catch a man breaking into their home (which, to anyone on the outside, appears abandoned), they have to make a choice whether to believe Will (Christopher Abbott) when he says he’s just trying to find water and shelter for his wife and young son. As he’s not infected and there is strength in numbers and pooling supplies (he has livestock), they invite his family (Riley Keogh as his wife and David Pendleton as his toddler son) into their protected world.

It Comes at Night could have gone off in any number of conventional directions but Shults keeps it lean and direct. There’s little backstory to speak of and no explanation for the pandemic and he doesn’t resort to external threats. This is no siege thriller and the zombies aren’t scratching to get in. The drama and conflict arises from the nuances of family dynamics and strangers getting to know each other under extreme circumstances. And in the midst of all this uncertainty is the teenage Travis, a sensitive boy toughening up fast in the savage world of the apocalypse, facing very human struggles within his own body. Not disease, mind you, just growing up.

The dark of night in a home with no windows lit entirely in isolated pools of lamplight and slashes of flashlight beams makes for a powerful atmosphere. Spooky and plunged in inky darkness, it beautifully echoes their own sense of unease and mistrust. We fill in the dark holes with our worst fears, especially when the survival of loved ones is at stake. It’s a film about survival and fear and suspicion, and how the deadly emotional cocktail bubbles in darkness and isolation. That human center makes it all the more affecting.

, iTunes, GooglePlay and/or other services. Availability may vary by service.
It Comes At Night [Blu-ray]

It Comes At Night [DVD]

The Lionsgate DVD and Blu-ray features commentary by filmmaker Trey Edward Shults and actor Kelvin Harrison Jr. and the featurette “Human Nature: Creating It Comes at Night.” The Blu-ray also features a bonus Ultraviolet HD digital copy of the film.