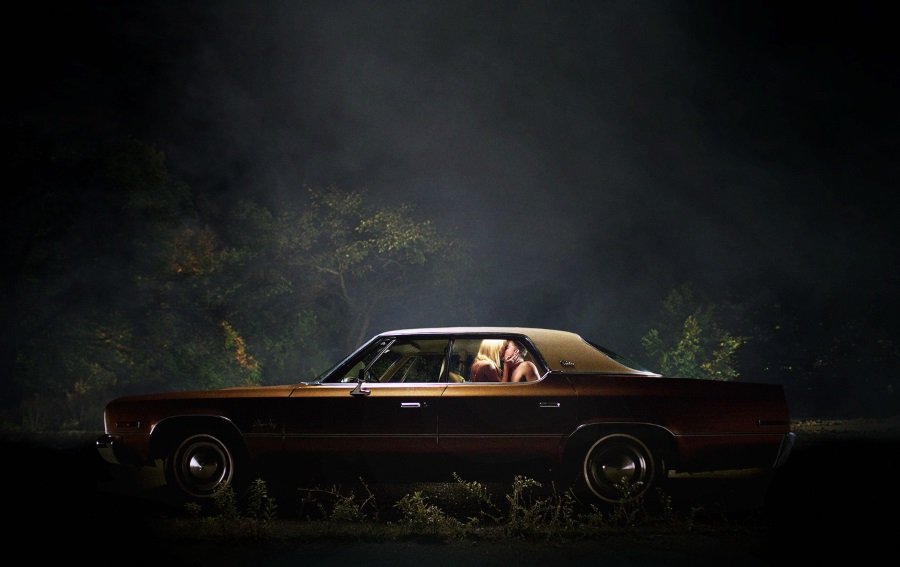 It Follows (2015) is both the title and the premise of this simple but intelligent low-budget horror.

The premise is like a twist on Ringu / The Ring, except that this curse is passed on through sex, which writer / director David Robert Mitchell plays with a tender sense of romance that twists into a terrible betrayal and violation. The glow of the first time for teenage girl Jay (Maika Monroe) immediately becomes a nightmare thanks to the most vicious form of venereal disease since David Cronenberg’s horror days, and this disease is unnervingly scary: figures that change identity as they follow, deliberately and relentlessly, until they catch up with and kill the cursed. “It’s slow but it’s not stupid,” she’s warned, and it can take the form of creepy strangers or dead-eyed loved ones.

A tonic to the spate of “found footage” and shaky-cam horror films designed to look like they are home movies gone bad, this is a carefully designed film that recalls the visual control of John Carpenter’s early horror films, especially the way it tracks movement within carefully composed shots. Before you know it, you’ll be scanning any and every shot to see if anyone is moving in the background or coming up on our characters. But it also turns on the sexual component of the film and behind the horror is a perceptive observation of how sex is never just sex. It changes things, for better and for worse.

Just one piece of advice: see it on as big a screen as possible. The stillness of the direction and the careful choreography and camera movement create subtle effects lost on the tablet or, heaven help us, smartphone screen.

R for nudity, language, and scenes of violence.

and other services. Availability may vary by service.
It Follows (DVD)

The Blu-ray and DVD editions feature commentary by a critics roundtable hosted by Scott Weinberg, an interview with composer Disasterpeace, and a poster art gallery, plus an Ultraviolet Digital HD copy of the film (SD for DVD release).

Pingback: What to watch: 'Begin Again' on Netflix, 'Learning to Drive on Amazon Prime, and more - Stream On Demand
Pingback: Homepage
Comments are closed.