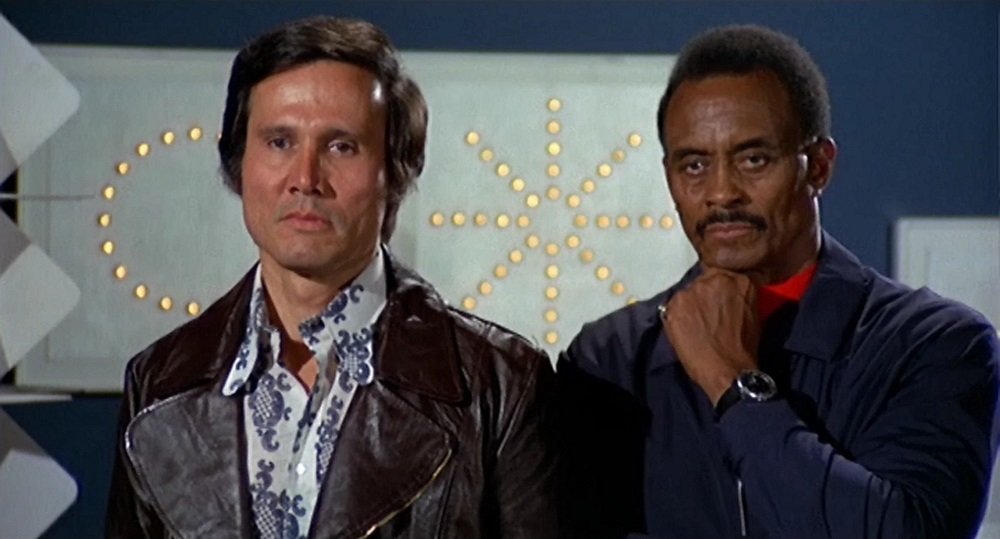 The Italian Connection (Italy, 1972), from Italy’s king of crime cinema Fernando di Leo, stars Mario Adani (the top dog thug of the Americano’s gang in di Leo’s earlier Caliber 9) as Luca, a remarkably affable and well-liked pimp whose popularity on the street makes the Milan boss nervous. So he frames Luca for a crime that brings a pair of hitmen (Henry Silva, the flashy one, and Woody Strode, the intense, brooding one) from New York to make an example of him.

In the culture of crime bosses and killers, Adani’s Luca is a petty figure who has earned the respect from the neighborhood merchants and hustlers and even the girls in his stable, so when the price goes on his head, these outsiders end up looking out for him… up to a point.

Outside of the Darwinian viciousness of the mob, these small-timers put loyalty and friendship over other considerations except survival. What makes this film buzz, however, is the information vacuum around Luca, who has no idea why he’s being hunted but turns just as ferocious when the dishonorable boss targets his own family (flesh and blood, not crime) in his rush to rub him out before the New York guns discover the truth.

Silva and Strode inspired Jules and Vincent (played by John Travolta and Samuel L. Jackson) in Quentin Tarantino’s Pulp Fiction. I assume Tarantino saw the dubbed and recut edition that landed on VHS during his time as a video clerk. The original, uncut version was restored by Raro Video and released on DVD in the U.S. in 2011. That is the version available to stream.

and other services. Availability may vary by service.
Fernando Di Leo Crime Collection (Caliber 9 / The Italian Connection / The Boss / Rulers of the City) [DVD]

It is available on Blu-ray and DVD in the Raro Video box set Fernando Di Leo Crime Collection, which also includes Caliber 9 (1972), The Boss (1973), and Rulers of the City (1976). Both are mastered from the original 35mm negative (it still looks a little rough but that’s a matter of wear on the original elements; the image is sharp and vivid) but the Blu-ray edition features a superior HD master. All editions feature the original Italian soundtrack with new English subtitle translations plus an optional English dub soundtrack.

The set features the 38-minutes documentary “Fernando Di Leo: The Genesis of the Genre,” with interviews with Di Leo (it was made before he died in 2003) and many of his collaborators, and the 26-minute TV documentary “Scerbanenco Noir,” on author Giorgio Scerbanenco (whose story provides the basis of the screenplay), and a photo gallery with commentary by historian G. Moschin, plus every disc includes a retrospective featurette on the making of the respective film, filled with interviews with the actors, producers, crew-members and Di Leo himself, and a director biography and filmography. A booklet with an introduction by Luca Rea and a 2001 print interview with Di Leo (conducted by Rea) completes the box set, slipped into the slipcase next to the four thinpak cases.