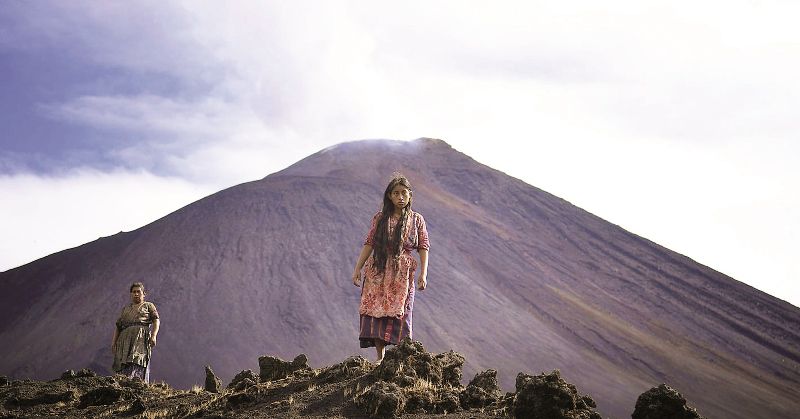 Ixcanul (Guatemala, 2015), the first film from Guatemala submitted in the Foreign Language Film category of the Academy Awards, is a fable-like drama set in the isolated mountains of the Guatemalan jungle.

The title is the Mayan word for volcano and ostensibly refers to the dormant volcano that looms over the impoverished Mayan village where the inhabitants eke out a living harvesting coffee beans at the nearby plantation and farming the inhospitable fields hewn out of the jungle. The parents of Maria (María Mercedes Coroy), a beautiful, hard-working young woman with an intense presence, have arranged a marriage with the plantation foreman, who has been generous to the family. But Maria has plans to run off to America with Pepe, a fellow worker her own age who talks big and drinks his wages away at the local dive bar, and she seduces him to seal the deal. It has consequences that changes everything for her.

The feature debut of Guatemalan filmmaker Jayro Bustamante is a beautiful and unsentimental portrait of traditional Mayan culture where peasants live in huts without electricity or running water and speak their native Kaqchikel, unable to communicate with the Spanish speakers from the nearby city without an interpreter. He immerses is in their day to day routines and rituals at the unhurried pace of their lives without commentary or explanation.

Like all of the cast members, Coroy is not a professional actress but her enigmatic face and impassive expression is mesmerizing and she communicates a longing for something more and the determination to stand up for herself. The landscape is stunning, vast and beautiful and dangerous, and beyond the jungle is the massive monolith of black rock and ash that seems to trap them in their poverty. American is on the other side, it is said, a land of promise and opportunity. But the jungle is no more treacherous than the city, where the peasants are pegged as easy prey. The ordeal of Maria and her parents is harrowing and Bustamante presents it without melodramatic flourish, focusing on their strength as he shows their plight.

In Spanish and Kaqchikel with English subtitles.

and other services. Availability may vary by service.
Ixcanul [DVD]