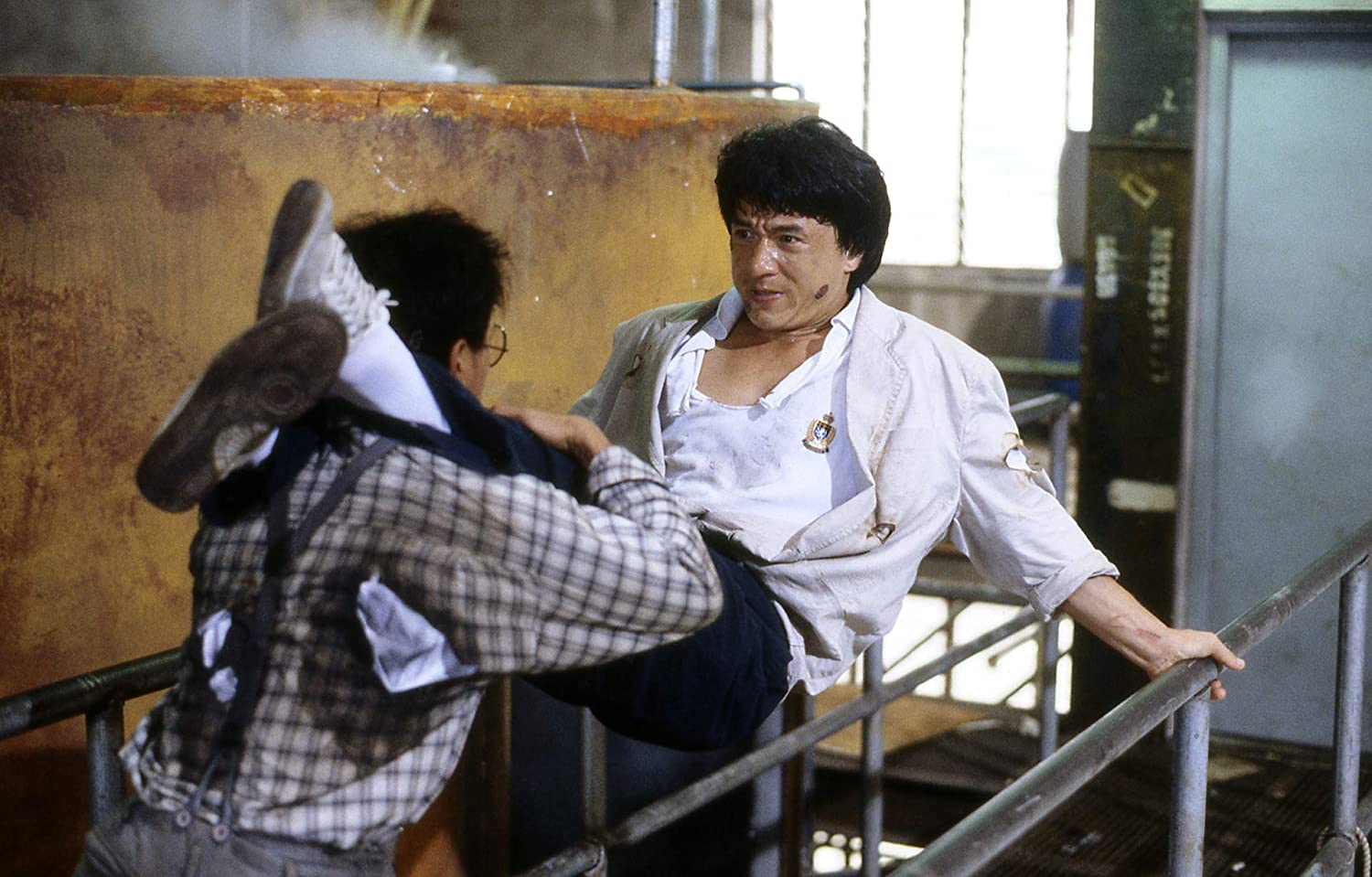 In the Hong Kong action movie explosion of the eighties, when the craziest, most kinetically energetic and narratively surreal action movies were pouring out of the Hong Kong film studios at a breakneck pace, Jackie Chan’s Police Story (Hong Kong, 1985) was one of the films that both defined and redefined the industry while firmly establishing Jackie Chan as a worldwide superstar. Everywhere except the U.S.

Police Story was his answer to the American action blockbuster and the first of his aggressive appropriations of American hit movies remade as Jackie Chan spectacles. Modern and urban, filled with gritty action and juvenile slapstick, it incorporated Jackie’s brand of acrobatic martial arts (with all its comic flourishes) with big budget set pieces and eye-popping stunts. The story is almost inconsequential, something to do with a case against a mob boss and his drug operation. Chan is Ka Kui, a committed officer on the elite CID division of the Hong Kong Police, is assigned to “protect” a reluctant witness (the great Brigitte Lin) and then framed by the mob as a corrupt cop, sending him on the run to clear his name and take out the gang one man at a time.

The only logic is kinetic: one action follows another with ingenuity and physical integrity. It opens on mission gone wrong that turns into a car chase through a hillside shantytown reduced to rubble by the careening vehicles smashing through huts and blowing out walls as inhabitants scurry for cover. It ends with a brutal one-man battle with a criminal army in the six-story atrium mall that sends fighters through plate glass windows and down escalators.

In between is a satire of office politics, a slapstick romance between a smug, chauvinistic Chan and his fresh-faced girlfriend May (a very young Maggie Cheung)—an innocent who gets almost unbearably knocked about for laughs—and an almost non-stop mix of acrobatic set-pieces, physical comedy, and fast and furious fight scenes. It’s the whole raison d’etre for the film and Jackie walks a fine line through the action, which is both potentially deadly and yet much of it played for humor. The cleverness and the comic potential blunt the brutality of the battle.

As a director and a savvy manager of his brand, Chan knew what audiences wanted and he delivered in spades. Like his American heroes, Buster Keaton and Charlie Chaplin, he presented his most elaborate and daring fights and stunts in long, unbroken takes, the better to show his fans that he did at all, with no stunt doubles or cheating shots. And then he showed it again, and again, from other angles, to give everyone their money’s worth. And just to prove his credentials, he plays it all again in a closing credits montage, with clips interspersed with behind-the-scenes footage and outtakes from stunts gone wrong.

If the first Police Story topped the American action cop movie in terms of sheer stunt audacity and execution, Police Story 2 (Hong Kong, 1988) takes on the criminal mastermind genre of American action movies with a gang of bombers targeting Hong Kong corporations with an extortion racket. As in the first film, Chan fills every scene with action or slapstick, often both together, but he switches it up between car chases, stunt spectacle, and intense, ingeniously choreographed fight scenes, and then adds a police procedural with a special division of plainclothes operatives known as “The Dogs,” who tail suspects in an elaborate sequence that Chan keeps moving at a crisp pace and clarity.

There’s also a satisfying self-awareness to it, opening with a montage recap of the action highlights of the first film and then confronting the consequences of the mayhem: Chan is demoted to traffic cop because of the property damage in the shopping mall of the last case, all of it charged to the department.

Police Story 2 is more technically accomplished than the first film and even more mature, and he ups the ante with bigger set pieces, including a series of big explosions. That’s not to say it’s necessarily better (it never quite matches the anything goes energy and freshness of the origin) or that he turns his back on juvenile humor (exhibit A: a big, broad, childish fart joke in an elevator). But it is just as dynamic and filled with furious action while offering a more serious version of Chan’s boyish police officer. Even when demoted to traffic duty he is committed to the job and it’s a comforting to see him more responsive to May, even if she still gets knocked about in slapstick gags, beaten by gangsters, and humiliated and neglected by Chan and the cops. These films have a juvenile sense of adult life and romance, but that odd mix of narrative naiveté and visual intensity is part of what makes these films so vivid. They are like nothing out of American studios.

Not rated. Criterion offers original Cantonese and English-dubbed soundtracks (with subtitles) plus bonus interviews and featurettes from the Special Edition disc release.

Also available on DVD and Blu-ray in a deluxe Criterion edition and on SVOD through Amazon Video, iTunes, GooglePlay, Vudu, and/or other services. Availability may vary by service.
Police Story/Police Story 2 (The Criterion Collection) [Blu-ray]

Criterion presents both films newly remastered in 4K in a double feature presentation on Blu-ray and DVD, presented with both original Cantonese and English-dubbed soundtracks (with subtitles).

Police Story features excerpts from the 1999 documentary Jackie Chan: My Stunts (through run just over an hour), new interviews with filmmaker Edgar Wright and film historian Grady Hendrix, an audio only interview with Chan conducted by Edgar Wright, a vintage interview Chan, and an archival clip featuring Chan and the original members of the Jackie Chan Stunt Team. Police Story 2 features the shorter Hong Kong cut of the film (in Cantonese with English subtitles only), the new video program Rienventing Action with Grady Hendrix, a 1989 episode of Son of the Incredibly Strange Film Show featuring Chan, a 1964 episode of the French TV show Edition speiale on the Beijing Opera, an archival interview with martial arts specialist Benny Lai, and five-minute stunt reel. The booklet features an essay by Nick Pinkerton.