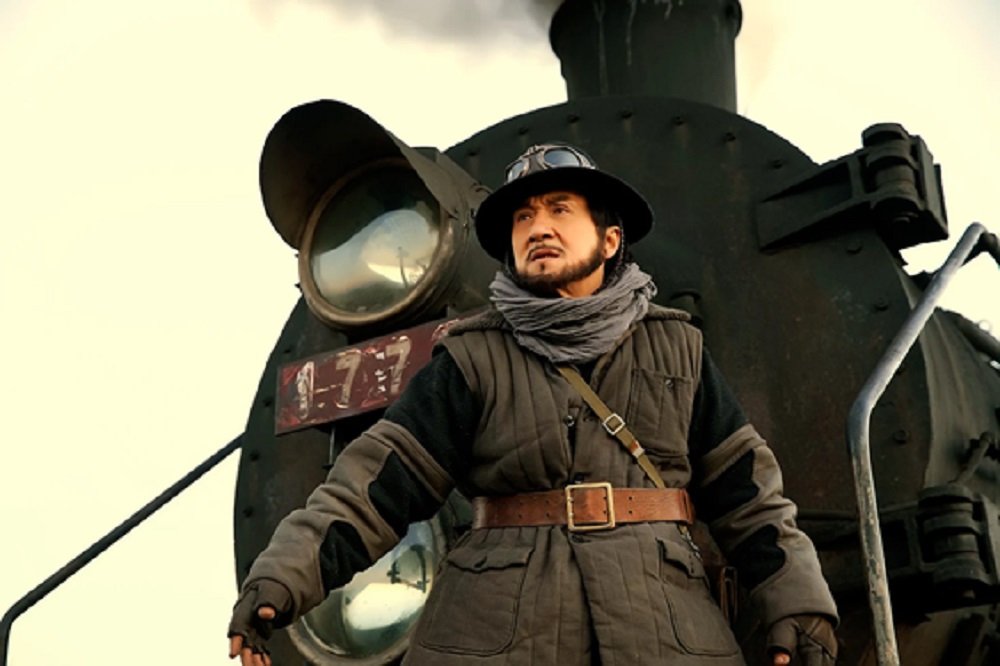 Jackie Chan stars in Railroad Tigers (China, 2016) as the leader of a scruffy band of rural railroad porters who stage raids on Japanese trains running through occupied China in World War II. They drop into moving trains, steal food for the villagers, and leave their mark by drawing flying tigers on the bodies of the unconscious Japanese soldiers and engineers, often badly drawn that the authorities can’t always make out the images. So yes, it’s an action comedy as well as a period caper and a mission movie, and Jackie shares stunt duties with a cast of younger actors. It’s not just Jackie who stars but the award-winning Jackie Chan Stuntman Association.

The opening heist is a terrific sequence, directed by Ding Sheng with a rollicking energy I haven’t seen in Jackie’s films for some time, and it raises hopes for a better film than the one that finally leaves the station.

The plot sends the squad of amateur guerrillas on a military mission to blow up a key bridge on the Japanese supply lines. Joining the mission in various capacities are his hammer-wielding partner (Zitao Huang), the dour noodle shop owner and former soldier who happens to be a crack sharpshooter (Kai Wang), and Auntie (Xu Fan), always ready to slip the authorities a mickey through a drugged potato pancake. Jaycee Chan (Jackie’s son) also joins the fun. The occupying Japanese are led by the vicious Captain Yamaguchi (Hiroyuki Ikeuchi), the standard torture-loving military villain of such Chinese war movies whose most distinctive characteristic is that he’s almost comically persistent; his ability to survive and bounce back from seemingly fatal events is a gimmick that defies logic. Much like the rest of the film.

It’s really something of a sprawling mess that director Sheng lets tumble out of control. There are some clever action scenes that combine Chan’s trademark mix of acrobatics, agility, and comedy to good effect but much of the whimsy is out of place in a situation where such actions bring brutal reprisals; even a ritual suicide scene is played for laughs. The final act is an overstuffed spectacle where the stunt work gets swamped by cartoonish CGI: military tanks on flat cars blasting away at raider and each other, railway cars colliding and tumbling over one another, obviously animated explosions, and characters reduced to computer generated figures swinging wildly below the target bridge.

At times it’s a blast but the rest of it is sustained largely by the power of Chan’s charm and the grace of the clown prince of kung-fu comedy. Even at the age of 62, the man moves with an elegance unmatched by anyone in the world.

, iTunes, GooglePlay and/or other services. Availability may vary by service.
Railroad Tigers [Blu-ray]

The Blu-ray and DVD release from Well Go includes four featurettes (in Mandarin with subtitles). The Blu-ray includes a bonus DVD copy of the film.