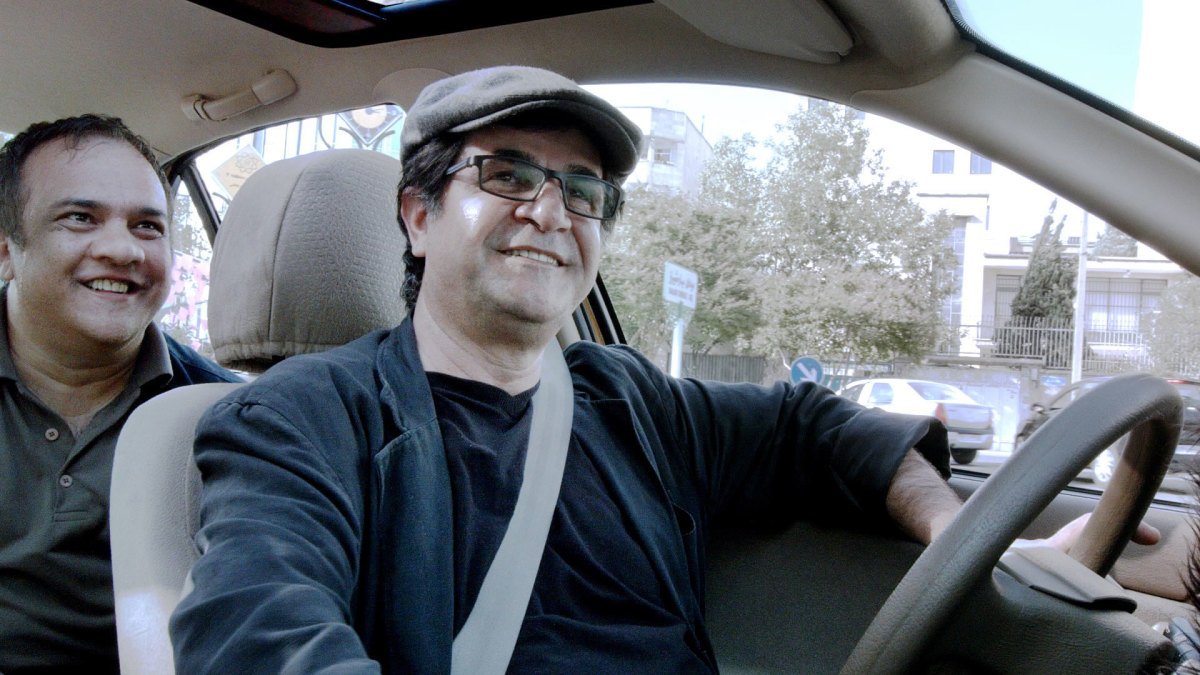 Jafar Panahi’s Taxi carries only one acting credit, that of Iranian filmmaker Jafar Panahi, who is quite literally in the driver’s seat of this guerilla film made on the streets of Tehran. It’s not a matter of ego—Panahi comes off as the most modest of filmmakers—but protection. This is the third film that Panahi has made since he was banned from filmmaking after his 2010 conviction for creating “anti-Islamic propaganda” through his probing, provocative, often slyly funny films. While he has co-conspirators in his defiant productions, he takes full responsibility in the credits. And his smiling face dominates, courtesy of a dashboard camera that he alternately turns back to see the folks in his cab or forward to look at the street scenes out the windshield.

This is a film shot entirely on smart phones and dashboard cameras which never leave the cab, constantly observing the world outside while engaging with the conversations within as passengers come and go. Panahi, it turns out, isn’t much of a cabbie—he doesn’t know the routes, waves off fares, and even recommends one of his passengers grab another cab for better service—but he is an engaging host and he prompts everyone who steps inside to converse. One passenger, a man who sells DVD bootlegs of foreign films, spots the camera on the dashboard and recognizes the driver (Panahi was once a customer) and suggests that the previous occupants are actually actors in a movie he’s making. There are arguments over Sharia law, a conversation with an unnamed but real-life human rights lawyer, discussions over the hardships of everyday life, and of course talk about movies, both watching and making them. When his young niece Hana decries the restrictions imposed on a student film assignment—the very same restrictions imposed on all films made in Iran—Panahi’s commentary comes from practical experience.

Like so many of his previous films, Taxi slips between documentary and drama, staging scenes that may or may not be scripted with passengers who are surely actors, or at the very least friends willing to take a role in an illegal production. It all feels spontaneous yet knowing, filled with wry humor and revealing asides, slipping in political and social commentary with a smile. Fans of Panahi will recognize references to his films Crimson Gold and Offside. A pair of old women transporting goldfish recall The White Balloon and entire project reverberates with the self-reflexivity of The Mirror. They are playful asides in a film that seems to meander through conversations that, as they accrue, offer a sneaky, self-aware commentary on life in modern Iran that once again makes a show of threading the needle of official policy and calling it out at the same time.

Panahi does all this while remaining in Iran, flaunting his sentence with a gentle demeanor and an easy smile that belies the very real consequences his defiance could bring down upon him. That alone doesn’t make this a work of art, mind you, and his ambitions are somewhat lowered from subtle provocations of his first post-sentence production, This is Not a Film (2011). But he also fills the film with a joy of filmmaking and an appreciation for the personalities that step in and out of his can and the film. His slippery way of sliding between documentary and fiction and his hopeful outlook create something truly engaging.

In Farsi with English subtitles.

Also on Blu-ray and DVD feature a booklet with an essay by filmmaker and scholar Jamsheed Akrami.
Jafar Panahi’s Taxi [DVD)