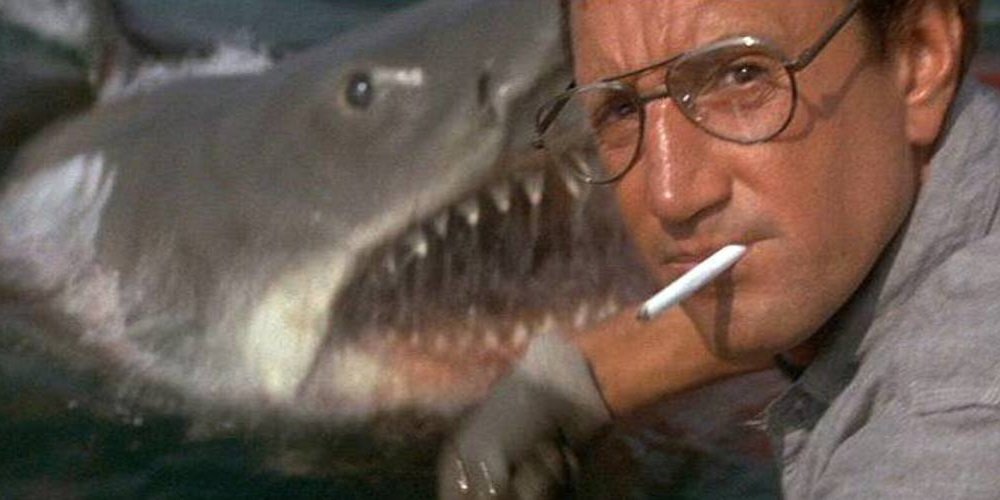 Jaws (1975), Steven Spielberg’s meticulously-directed, tension-filled, career-redefining thrill machine, has been pegged as the original modern summer blockbuster. And while that is true, this pop-culture masterpiece is more than simply a well-tooled thriller. Spielberg brings a sense of community, family, and humanity to the supermarket thriller from Peter Benchley, a book more designed than written.

Roy Scheider stars as the New England seaside vacation town police chief who is afraid of the water, Richard Dreyfus is the hippy oceanographer with a weak stomach, and Robert Shaw showboats shamelessly and superbly as the crusty old salt who leads the shark hunt with a snarl.

Visually, Spielberg’s work is brilliant. Lazy shark fins, water ripples, snapping fishing lines, and buoys racing across the surf hint at something monstrous trolling beneath the surface. As the tension mounts, every shot of the ocean reminds us that a primal killer awaits under the placid surf. Though frankly phony when it finally bobs up for sharko-a-mano combat, the film is brilliant when the shark is a barely glimpsed force of nature. Today horror movies erupt in any and every situation, but in 1975 Spielberg shook up American audiences by making one of our comfort zones unsafe. He created an elemental monster movie in the bright daylight of suburban America’s summer beach vacation.

But it’s not all thrills and suspense. Spielberg grounds Scheider’s small town cop in a bustling family life that gives his survival—and his concern—a drive just as primal as the shark’s killer instinct. In inspired buddy movie fashion, Dreyfus and Shaw compare battle scars and bond over a sea chanty with Scheider, and (in the film’s most riveting scene) Shaw mesmerizes his fellow shark hunters—and the audience—with the chilling story of the sinking of the USS Indianapolis and the hundreds of sailors picked off in the open sea by sharks. Without a single special effect, Spielberg holds the audience rapt with the horror of the bloodiest shark attack ever recorded, and then punctuates the scene with an ominous, almost taunting thump against the boat. The shark has come for the trio.

It won three Academy Awards, for Best Editing, Best Sound, and John Williams’s iconic Best Score. And while it was nominated for Best Picture, Spielberg was left out of the Best Director list.

, iTunes, GooglePlay and/or other services. Availability may vary by service.
Jaws [Blu-ray]

On Blu-ray and DVD from Universal. The Blu-ray debut features the legendary, years-in-the-making documentary “The Shark is Still Working: The Impact and Legacy of Jaws.” The feature-length film, narrated by Roy Scheider, is a 2007 independent production that features interviews with the surviving actors and major collaborators on the production and rare production footage. It’s previously only been seen in film festivals and makes a great companion piece to Laurence Bouzereau’s two-hour “The Making of Jaws,” the “official” in-house production that is still one of the best made-for-disc supplements (it was, in fact, originally made for the laserdisc release).

There’s also “Jaws: The Restoration” along with the supplements from the previous DVD special edition: deleted scenes (including a moment of pure Spielberg, an unused introduction to the Brody family that displays his still underrated talents for capturing family dynamics with quiet ease) and outtakes (see Robert Shaw coughing up blood), an archival interview from the set with Steven Spielberg, and archives of production stills, drawings and storyboards, marketing materials, and “Jaws” ephemera, plus the original trailer.

The two-disc 100th Anniversary release features both Blu-ray and DVD editions, an Ultraviolet digital copy, and a digital copy you can download from iTunes.