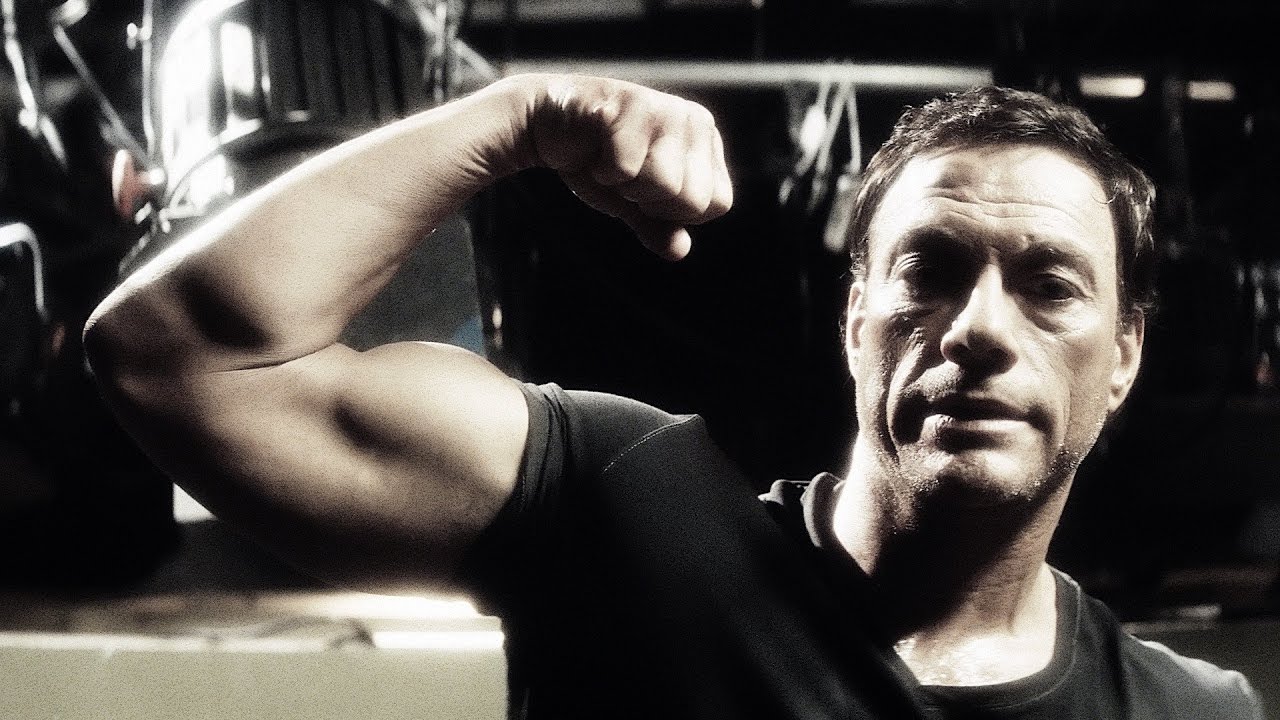 In the opening scene of JCVD (Belgium, 2008), Jean-Claude Van Damme takes out one heavily-armed, vaguely military bad guy after another with his bare hands (and whatever blunt instruments and discarded weapons he grabs along the way) in an elaborately choreographed long take. He comes out the other end huffing and winded as the set falls down around and ruins the take. “It’s hard for me to do it all in one take,” he begs the arrogant, snotty young director. “I’m 47 years old.” And we can see the toll that age, exertion, and high-living have taken.

JCVD is not a biography, though Belgian-born Jean-Claude Van Damme does in fact play a martial arts champion and aging action movie star who returns home to Belgium while he’s embroiled in a brutal custody battle over his daughter and struggling with a film career sliding into cheap international flicks and direct-to-DVD productions. It’s not exactly an action thriller, though there is a heist-turned-hostage situation a la Dog Day Afternoon, with JCVD smack in the middle and a growing crowd shouting their support for their favorite son (the cops assume that he’s the leader of the gang). And it’s not quite a satire, though Van Damme allows director Mabrouk El Mechri to lay waste to his film career in sardonic comments and his life in self-lacerating scenes.

JCVD is an action film where the flamboyant heroics occur only in fantasy. Van Damme’s most daring stunt is a monologue dropped into the middle of the movie, a self-pitying apologia, where he spins his story of a simple Belgian martial arts champ seduced by Hollywood, the naive innocent destroyed by the liars and corrupted by the sudden fame and decadence. It plays like Van Damme’s version of Bela Lugosi’s “Home? I have no home!” speech in Ed Wood’s Bride of the Beast, with Van Damme showing his thespian skills by letting a single tear roll down his cheek up as he rakes over the coals of his screwed-up life. His dramatic muscles are awfully creaky and it’s hard to tell if it’s achingly pretentious, deadpan self-parody, or merely Van Damme’s idea of screen test.

But that ambiguity makes the scene so much more interesting and Van Damme is surprisingly engaging as a version of himself who is more vulnerable human being action hero as he tries to survive an armed gang of unraveling personalities. In the real world, he’s more apt to talk than take on a trio of thugs with guns. It’s his first feature in French, his native language. And he manages to maintain self-effacing dignity in the face of director/co-writer Mabrouk El Mechri’s take on his troubled private life. It’s an impressive stunt that pays off in an action film for art movie aficionados and a foreign film for the popcorn crowd.

The original film was in French with some English sequences. Amazon presents the English dub version featuring another (uncredited) actor dubbing over Van Damme’s French scenes, which is admittedly a bit distracting since he doesn’t match the voice of Van Damme’s early English scenes.

, iTunes, GooglePlay and/or other services. Availability may vary by service.
JCVD (Sony) [Blu-Ray]

Originally released Blu-ray and DVD from Peace Arch Entertainment, which features a pair of deleted scenes, then reissued by Sony in 2012. Both have the option of the French language theatrical version (where Van Damme does some scenes in English) or an English dub version. This latter is very distracting, as his English scenes are left intact but another (uncredited) actor dubs over his French scenes. And no, it doesn’t really sound much like the voice were used to hearing come from the Muscles from Brussels.