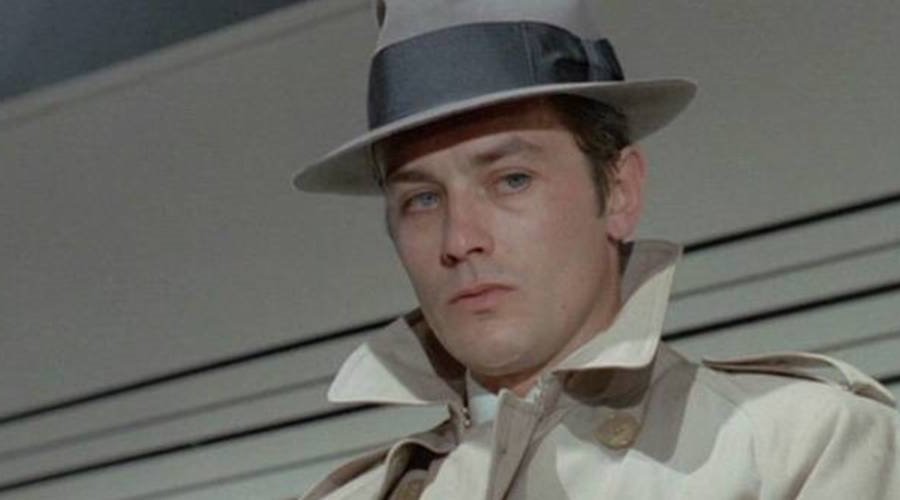 Delon’s impassive hitman Jeff Costello is a professional’s professional, an assassin with a face of stone, nerves of ice, and the patience of a monk. He has a meticulous method and an inflexible code in an alienated world of glass and metal and barely exists outside of his routines and discipline, but he doesn’t skimp on style, as his perfectly-pressed trenchcoat and snappy fedora attest. On his latest contract he lets a witness live, a charming jazz pianist Valerie (Cathy Rosier) who neglects to identify him in the police line-up. And then his employers put out a contract on him in lieu of payment, so he plots one last job while both the cops and the criminals close in on him.

Costello is a cipher, a zen killer with none of the desperation or psychotic drive of the classic noir killers and victims, but his façade begins to crack as the world collapses in on him, exposing the wound up psyche hidden behind his blank face. Francois Perier and Nathalie Delon co-star.

Melville meticulously details every move by Costello and the police in fascinating wordless sequences, from Costello’s preparations for his first hit to the cops’ exhaustive efforts to tail Jeff as he lines up his last. He drops iconic gangster conventions into an austere world that turns Paris into an insular universe where reality is subservient to the romance of the movies and his measured pace and austere direction creates an otherworldly ambiance, an uneasy calm on the verge of shattering, as if letting us into the wound up psyche hidden behind Costello’s blank face. And he rethinks the film noir in modern terms, as an existential crime drama in soft, somber color and sleek images from his reliable cinematographer extraordinaire Henri Decae (also responsible for The 400 Blows and Sundays and Cybele).

It inspired two pseudo remakes, Walter Hill’s The Driver and John Woo’s The Killer, but neither of those marvelous films comes close to the compelling austerity and meticulous detail of Melville’s cult masterpiece.

, iTunes, GooglePlay and/or other services. Availability may vary by service.
Le Samourai (The Criterion Collection) [DVD]