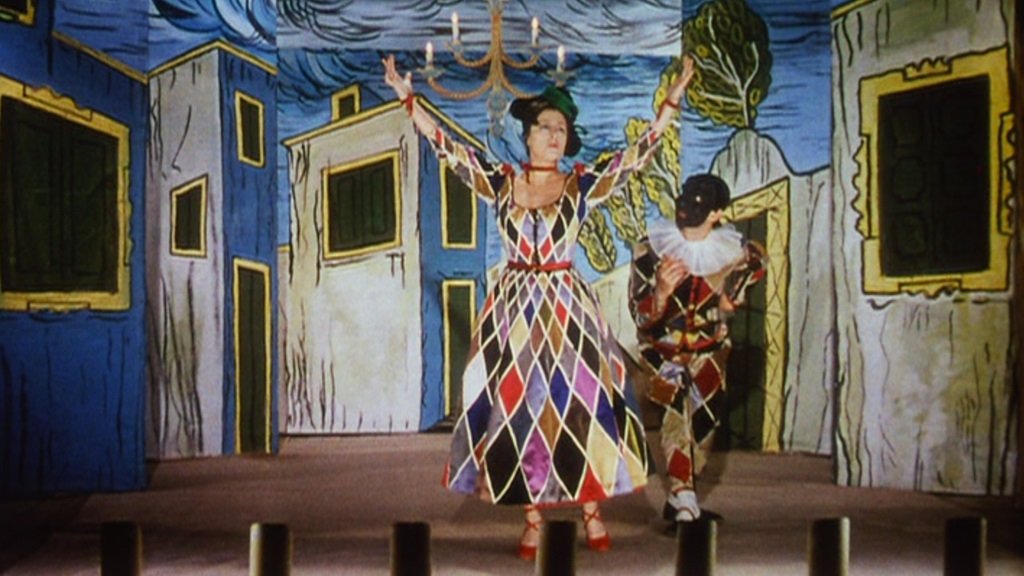 Anna Magnani stars as the earthy, vivacious diva of The Golden Coach (France/Italy, 1952), an adaptation of a Prosper Merimee play about a traveling troupe of Italian commedia dell’arte players in a Peruvian backwater where three men (a viceroy, a bullfighter, and a fellow performer) vie for the affections of the company’s leading lady.

An international production shot in English (it was also released in French and Italian versions, but Renoir always maintained that the English language version was the definitive), The Golden Coach came to Renoir after its original director, Luchino Visconti (a former assistant to Renoir), left over disagreements with producer. Renoir shot the film almost entirely on soundstages in Italy and chose a highly stylized and theatrical approach, directing his actors in the stylized “commedia dell’arte” mode and foregrounding the sumptuous but artificial sets with stage-like compositions. His camera moves in and out of a proscenium arch just to remind us that all the world’s a stage, but the film is hardly hemmed in by the frame.

The Technicolor production is alive with color and energy and it bubbles with a vital performance by Magnani (whose proletariat passion overcomes her stumbling English, learned phonetically for the production), while Duncan Lamont is deceivingly subtle as the viceroy playing at love with Magnani. A farce with a melancholy soul, it’s a celebration of the magic of art and the craziness of the heart. Renoir described it as “not so much an Anglo-American film as a translation into English of a French film in the Italian style.”

, iTunes, GooglePlay and/or other services. Availability may vary by service.
Stage and Spectacle: Three Films by Jean Renoir (The Golden Coach / French Cancan / Elena and Her Men) (The Criterion Collection) [DVD]

It’s available on DVD in a Criterion box set with French Cancan and Elena and Her Men, a loose trilogy of films about art, theater, and love. The set features filmed introductions to The Golden Coach and Elena and Her Men by Jean Renoir and video introductions to The Golden Coach by director Martin Scorsese and French Cancan by director Peter Bogdanovich, the documentary Jean Renoir: Hollywood and Beyond (part two of an excellent 1993 documentary made for the British Omnibus series by David Thompson), a three-part interview with Jean Renoir from the 1966 French TV documentary series Jean Renoir le Patron directed by Jacques Rivette, a video interview with Renoir set designer Max Douy, and accompanying fold-out inserts with original essays by film critics Jonathan Rosenbaum and Andrew Sarris and Renoir historian Christopher Faulkner.