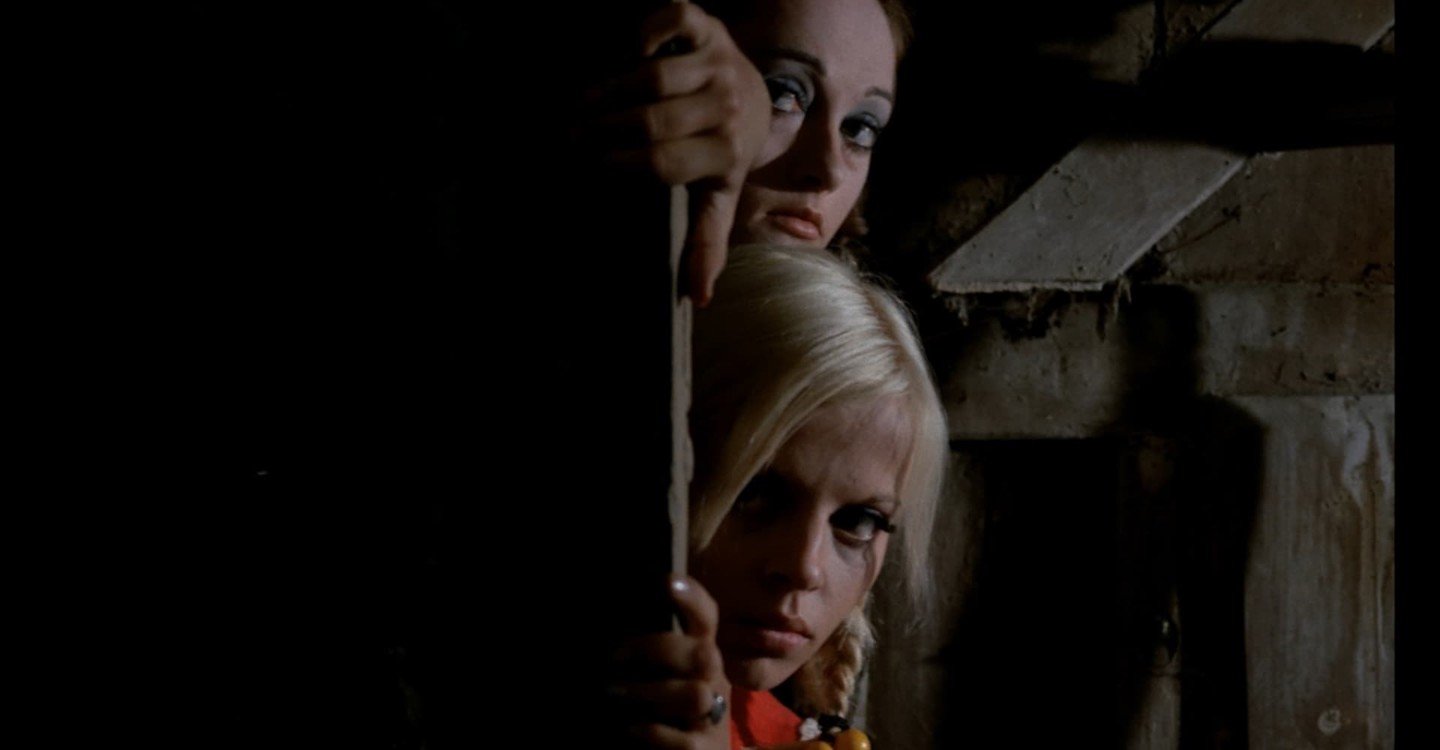 There was no director like Jean Rollin, the French horror fantasist who died in the waning days of 2010 at the age of 72 and left behind a strange and wonderful (and sometimes horrible) legacy in his distinctive films. His reputation never really extended beyond cult circles but the weird sensibility and distinctive style and imagery of his sex-and-horror exploitation films, and his ability to create unsettling atmosphere out of simple locations and minimalist sets, made him a legend in some circles.

Requiem for a Vampire (France, 1971) is one of Rollin’s best, and by that I mean one of his weirdest, craziest, most beautifully dreamlike movies. Imagine a gangster film crossing the border from a circus world to a horror movie. It opens with two schoolgirl nymphets (Marie-Pierre Castel and Mireille Dargent) in clown garb blasting handguns from the back of a getaway car careening down a country road. The braided young nymphs ditch the car, wipe off the clown white, and change into mini-skirts with nary a word spoken, and dreamily wander through a graveyard (where one falls into a freshly dug grave and is momentarily buried alive!) and into a castle, where they are suddenly set upon by cloaked figures and brutish henchmen. As they awaken to their sexuality, they are made the servants of a tired, sorry looking vampire desperately attempting to perpetuate his race with fresh blood and the nightmarish threat of the sexually depraved vampires looms over them: “Soon you will be initiated. You cannot be both virgin and vampire.”

The lyrical first half, with its fairy tale imagery, surreal poetry, and eerie beauty, gives way to astonishingly brutal scenes of kinky decadence and brutal nastiness (the vampire’s ogre-ish henchmen molest naked women chained up in their dungeon), but Rollin’s ethereal mood gives the largely wordless film a delicacy and a surprising melancholy conclusion. It ultimately is a requiem for a dying race, as well as a gorgeous picture that follows the loony logic of a waking dream.

, iTunes, GooglePlay and/or other services. Availability may vary by service.
Requiem for a Vampire [Blu-ray]

Requiem for a Vampire [DVD]

The Blu-ray and DVD releases on Kino Lorber are from the Redemption restorations, remastered from original 35mm negatives, and feature the original French soundtracks with English subtitles, an introduction by Jean Rollin, a collection of Rollin trailers, and a 16-page booklet with an essay by horror film historian Tim Lucas.