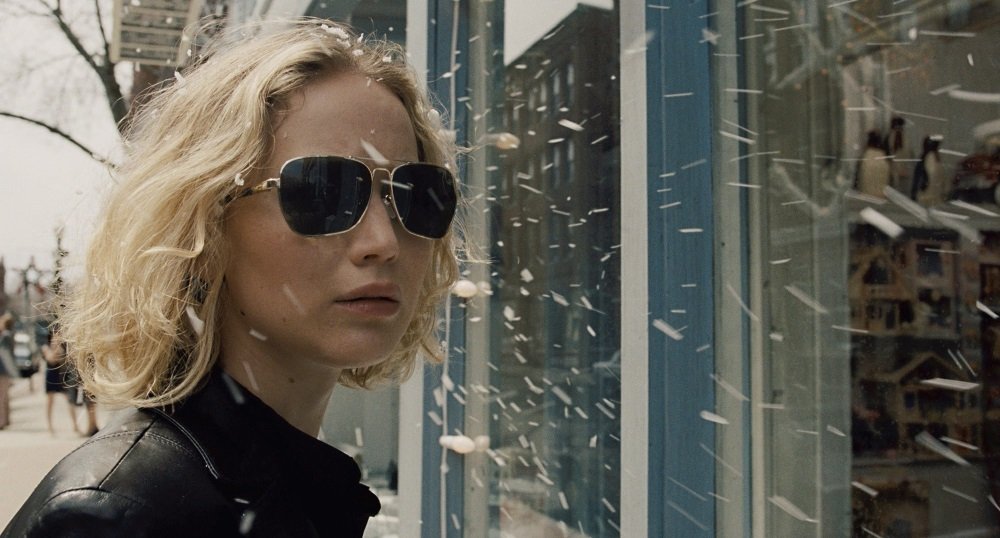 David O. Russell wrote (or rather, rewrote) Joy (2015) for Jennifer Lawrence, who he directed to an Academy Award in Silver Linings Playbook (2012) and an Oscar nomination in American Hustle. Lawrence score another nomination for Joy, based on the true story of Joy Mangano, the divorced single mother turned entrepreneur who invented the Miracle Mop, the first of more than 100 patents in her name. It’s an inspiring true life story and a great showcase for Lawrence, who evolves from overwhelmed mother and unappreciated foundation holding up a dysfunctional extended family to ferocious businesswoman and beloved on-air pitchwoman on the shopping network QVC to self-made mogul over the course of the film.

Also reuniting with Russell and Lawrence are Robert De Niro, who plays Joy’s blue collar father, and Bradley Cooper in a smaller role as a QVC executive with sparkling blues eyes suggests romance even as the script makes him strictly a mentor. This businessman is one of the few allies in Joy’s life. Her mother (Virginia Madsen) dropped out after being abandoned by husband De Niro to lay in bed all day watching soap operas (the same show seems to play 24-7) and her dad moves back into the family basement, where Joy’s ex-husband (Édgar Ramírez) is also camping out between gigs as an underemployed singer. They demand more attention than Joy’s own school-age children, and she juggles it all with a full-time job at an airline counter. When she comes up with the design for the Miracle Mop, which she engineers herself and has produced on a small scale, every step is beset with obstacles, from bad advice to crooked manufacturers to a disinterested QVC pitchman, which sends Joy in front of the camera to sell it herself: the working class everywoman selling the American Dream directly into homes across the country.

Russell rewrote an original script by Annie Mumolo, who co-wrote Bridesmaids, and turned it into a Russell film, with a narrative woven through with flashbacks and a dreamy narration from Joy’s grandmother (Diane Ladd), the only member of her family to encourage her apart from her ex-husband. Russell does self-defeating family dynamics, tangled in jealousy and resentment and self interest, well but the soap opera constantly undercutting her efforts is so overwrought that it never feels authentic. The colorful mess of this family is just another anchor trying to keep her from sailing to success.

Russell manages to put his stamp on what might otherwise be a conventional biopic and Lawrence makes Joy another of Russell’s great fighters, rolling with every punch and getting back up for the next round. She earns every victory. It’s just that the story is all over the place, a mess of colliding tones and cascades of setbacks and obstacles. The flair of Russell’s filmmaking and the dynamic performances, which are turned up to 11 in far too many scenes, fail to elevate the film above the familiar trajectory of the against-all-odds success story. It works almost entirely due to the passion and drive that Lawrence brings to the screen.

Leaves HBO on May 31. Watch it on HBO Now, HBO Go, and HBO On Demand

On Blu-ray and DVD and SVOD through Amazon

, iTunes, and other portals. The DVD and Blu-ray include the featurette “Joy, Strength and Perseverance” and the “Times Talk with Jennifer Lawrence and David O. Russell” interviewed by Maureen Dowd. Blu-ray features an Ultraviolet Digital HD copy of the film.
Joy [DVD]