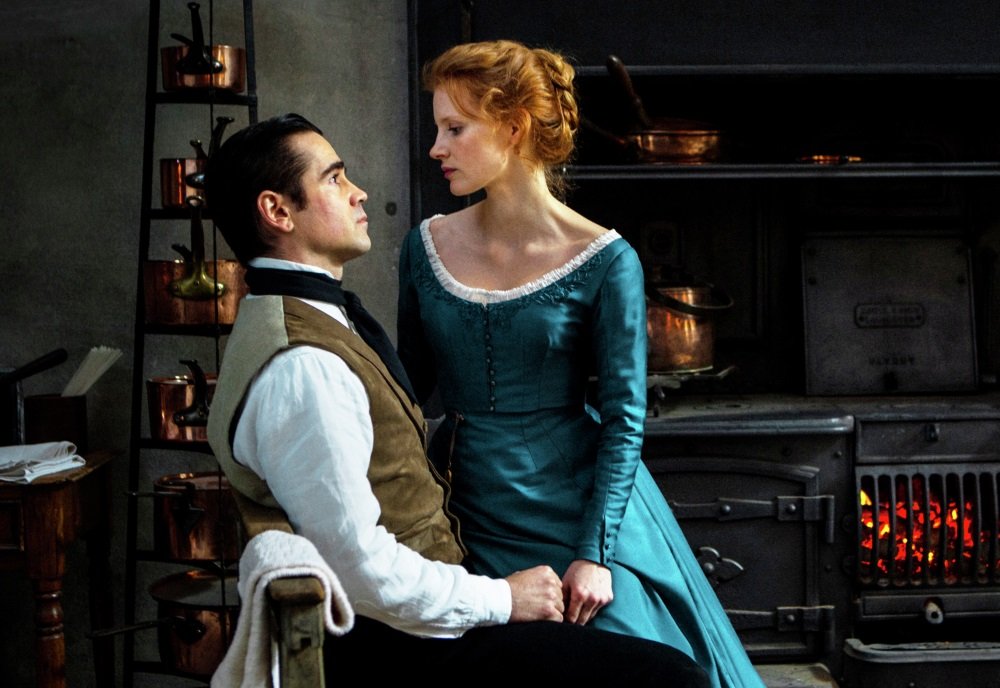 You can imagine Miss Julie (2014), Liv Ullman’s screen adaptation of the August Strindberg play, as a call back to the classic 1951 Swedish screen adaptation by Alf Sjöberg, who was a mentor to Ingmar Bergman, the Swedish master who directed Ullman to some of her greatest performances. Ullman directed Bergman’s screenplay in Faithless and now pays tribute to both her and Bergman’s roots.

Jessica Chastain stars as Miss Julie, daughter of a wealthy baron, in this version which has been relocated to Ireland, and Colin Farrell is her father’s valet, John, who she teases and toys with to his evident discomfort. John is in a vague relationship with the cook, Kathleen (Samantha Morton)—they sleep together but any further commitment is undefined—but apparently in love with the beautiful, imperious Julie, an impossible love given their class status. But that’s just the first act. These are the only three characters in the play, though we hear the peasants reveling outside in the midsummer solstice festival, and the relationships shift throughout, sometimes quite powerfully. This is very much a work of theater, complete with intense two-hander dialogue that winds into emotional breakdowns and complicated monologues. Farrell is harried and nervous and wrought up, Chastain fiery and arrogant, and then roles upend as Chastain’s Julie loses all grounding and becomes an emotional hurricane, all her confidence lost in the consequences of her reckless games. Kathleen stands by, aghast at all this crossing of class boundaries.

It’s a master class in acting. Chastain is excellent through every turn of her journey but particularly astounding as Julie loses her composure completely and her manners and decorum are lost in a surge of panic and betrayal and unleashed emotions she can’t contain, and Farrell reveals layers under the professional surface of John, the loyal servant with dreams beyond his reach. It’s also, for all of its intimacy, austere and formal and carefully choreographed as if the characters are playing out preordained roles. It is claustrophobic by design, which becomes oppressive and at times airless. It’s fascinating to watch, though not necessarily enjoyable, a fierce battle of wills and aspirations and realizations playing out in this bubble isolated from the rest of the world. The pleasures are in the performances and they are superb.