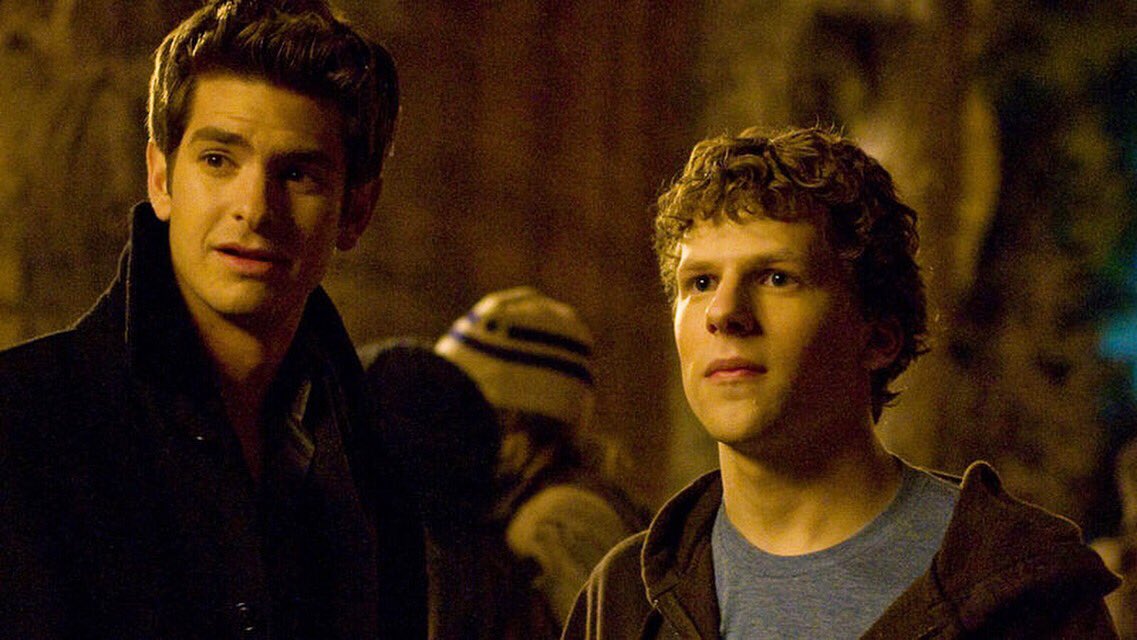 The Social Network (2010) presents Mark Zuckerberg (Jesse Eisenberg) as a self-involved nerd genius in Harvard who wants social acceptance but hasn’t a clue as to how to social interaction really works, either on a date or with his friends. The irony inherent in the film is that this young, arrogant genius with no people skills managed to deconstruct and reconstruct the social experience as a web-based simulacrum, and that this seriously uncool outcast designed an online community the thrived because it was cool.

This story of the creation of Facebook is not really about Facebook but the people who created it and how relationships unraveled on its trajectory to becoming a national (and eventually global) phenomenon and multi-million (now multi-billion) dollar business. You can get caught up in the “truth” of the details, the portrayals of characters and friendships and personalities, the accusations of theft and betrayal, but The Social Network is not a documentary or a biopic. It’s a drama built around the battle over the money of Facebook as Zuckerberg’s college buddy and original partner Eduardo Saverin (played with good-natured loyalty by Andrew Garfield) and Cameron and Tyler Winklevoss (both played by Armie Hammer with moneyed entitlement) sue Zuckerberg for what they claim is a rightful share in the company, with the story playing out in flashback.

Screenwriter Aaron Sorkin loves words and conversations and is at his best shaping dialogue for smart people juggling multiple ideas and projects, often within the same sentence. The dialogues are dense and compelling, but just as often are soliloquies tossed out by Zuckerberg to an audience he really doesn’t care to engage with. David Fincher directs them at a driving pace, not racing through them as much as unleashing them in a torrent, poured out by someone whose mouth runs to catch up with his mind and has no patience with those who can’t keep up.

There are plenty of pop psychology motivations seeded through the film (he created the site initially to impress a girl/to impress the exclusive Harvard clubs/to take revenge on the rich/popular/athletic students/to prove he could do it/to design an exclusive club that he could thrive in) but they explain the protagonist about as much as Rosebud does in Citizen Kane. This is a story of hubris and ambition, of friendship and jealousy, of class and cultural cache, of success as status and revenge. Is he an asshole, as he’s called out in the first scene, or just trying hard to be one? And does it matter? It’s not so much that he’s an enigma as that he lives his life without culpability, displaying his pettiest impulses without blanching and turning transgressions of conduct into points of pride, and he creates a virtual community where everyone can do the same with only the fear of being defriended as a check. Welcome to the virtual world.

It won Oscars for Sorkin’s screenplay, the original score by Trent Reznor and Atticus Ross, and the editing, plus awards from the Golden Globes, BAFTA, and the AFI.

, iTunes, GooglePlay, Fandango, Vudu and/or other services. Availability may vary by service.
The Social Network [Blu-ray]

David Fincher is one of the most exacting filmmakers in the world today and the supplements on the DVD and Blu-ray release offer a glimpse into his process. He takes the viewer through the film via a reflective commentary track (“I like the first scene of the movie to inform the audience how much they have to pay attention and this was one of them,” he says, talking not of his direction but Sorkin’s original screenplay) and behind the scenes in the superbly produced feature-length documentary “How Did They Ever Make a Movie of Facebook?,” which offers a wealth of script reads, rehearsal scenes, production meetings and footage from the set in addition to the generous collection of interviews with the cast and crew. The story of Fincher doing 99 takes of the opening scene, the conversation between Zuckerberg and Erica (Rooney Mara) that splinters into a break-up, is well known. The actors fill in the details, noting that it was one of the first scenes shot in the production and talking about how Fincher worked through each take, exploring with them to fine tune the scene until it defined their characters and the film. Their only question: why not do just one more to round it out to 100?

Screenwriter Aaron Sorkin (adapting the nonfiction book “The Accidental Billionaires”) and cast members Jesse Eisenberg, Andrew Garfield and Armie Hammer also chime in on a second commentary track (edited together from what appears to be three separate recording sessions). There are separate featurettes focused on the photography (“Jeff Cronenweth and David Fincher on the Visuals,” 7 minutes), editing and sound (“Angus Wall, Kirk Baxter and Ren Klyce on Post,” 17 minutes) and music (“Trent Reznor, Atticus Ross and David Fincher on the Score,” 19 minutes) plus a short piece on the “Swarmatron” (an electronic instrument used by Reznor) and multi-angle featurettes that break down to key scenes. It’s as intelligent and illuminative a collection of supplements as you’ll find on DVD/Blu-ray.