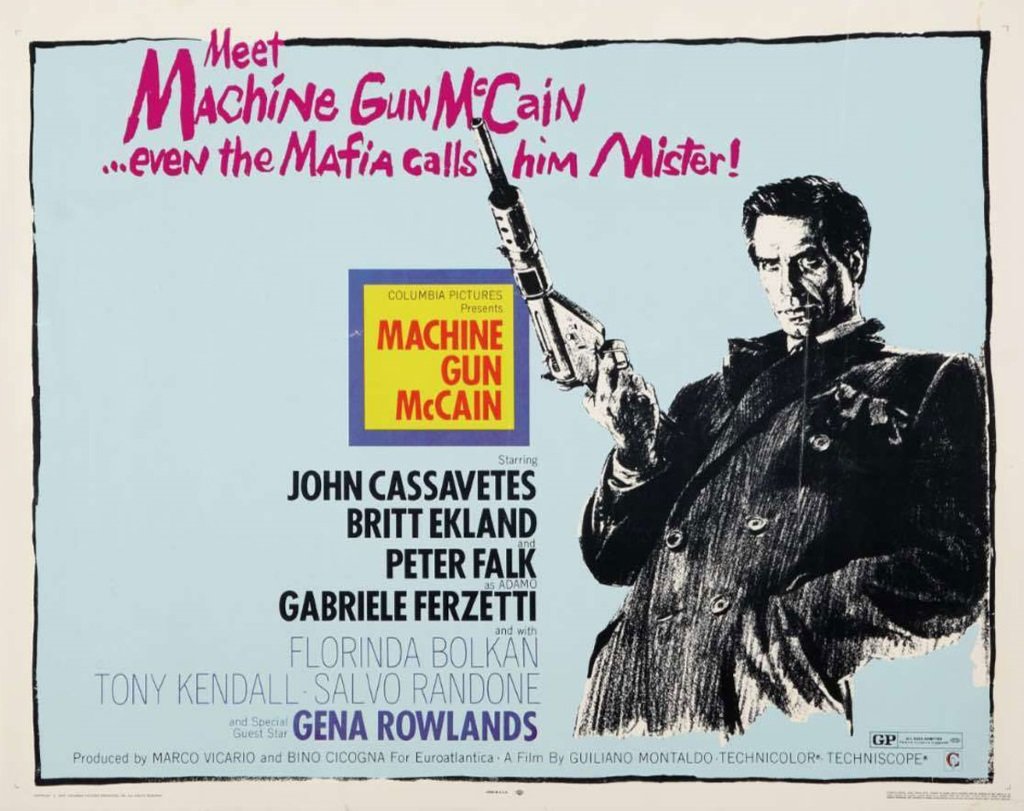 John Cassavetes was doing his Orson Welles thing—by that I mean acting in whatever movie paid well so he could finance his own, personal productions—when he took the lead in Machine Gun McCain (Italy, 1968), an Italian mob picture/heist movie hybrid shot in large part on location in San Francisco, Los Angeles and Las Vegas. His presence is defining, or perhaps redefining, in the film. Strolling out of prison with not so much a swagger as a comfortable amble, giving his farewells to inmates and guards alike and bantering with an estranged, slickly outfitted son who arranged for his early release, we immediately face a singularly independent operator about to bump up against the conformity and command of the syndicate.

Cassavetes is Hank McCain, an old-school criminal in the new order, sprung specifically to rob a Vegas casino that West Coast mob honcho Charlie Adamo (Peter Falk) is trying to muscle his way into, but McCain is not really a team player. Which complicates things when Adamo gets called on the carpet by the New York godfathers. It’s not just that Vegas is out of Adamo’s territory. The casino that he’s putting the squeeze on is secretly owned by the East Coast mob. When Adamo tries to call it off in typical mob fashion (by putting a hit out on McCain), it just makes the lone wolf McCain determined to go it alone.

The 1969 production from director Giuliano Montaldo (who previously made the very entertaining caper Grand Slam and went on to direct the 1971 Sacco & Vanzetti) wasn’t necessarily a thoroughly conventional film before Cassavetes came along but his distinctive presence gives the film an entirely unexpected rhythm and personality. On his first night of liberty in Vegas, he wanders the streets in his oddly shuffling and shrugging way, slipping into clubs and tweaking a pair of obnoxious barflies hitting on a hooker (Britt Ekland) put off by their dull persistence.

Montaldo lets Cassavetes go with his instincts and adds his free form improvisations to the structured melody of the script. Watching McCain cagily set up a meeting with the “partners” who are coming to kill him or put together his tools for the Vegas heist (complete with outfitting a sedan) and plant bombs for his cover is more like watching a dance than a caper film and Cassavetes moves to his own rhythms. By the end of the film, that breezy attitude turns to desperation and Cassavetes (now armed with the machine gun that gives the film its name) switches gears without letting McCain lose his focus. This crime vet is the strangest pro you’ve ever seen, executing a heist as if it was all about giving the finger to the mob but following through each step with consummate precision and timing and bravado.

Falk makes his character work as an ambitious, restless New York hood trying to expand his West Coast reach. With his gravel voice and street-thug diction and twitchy body language, he’s the eternal small-timer trying to fill out his position with big-time moves, but his street smarts are poor preparation for the politics of power at the top, and it never occurs to him that he’s been put there because he hasn’t the intelligence to challenge the bosses. Falk and Cassavetes share no scenes sadly but in the third act, Cassavetes connects with Gena Rowlands, who plays his long-time love. And I do mean connects: their rapport is sweet and sour, passionate but reproving, an affair interrupted by twelve years and too long gone to rekindle, but the embers still burn hot and deep. Rowland’s exit is a shock but it’s also an act of loyalty and resignation as dramatic (if not quite so affecting) as Thelma Ritter in Pickup on South Street. Genre stalwarts Gabriele Ferzetti, Florinda Bolkan, and Tony Kendall fill out the Italian side of the cast.

You’d never call it great but this Italian-American crime movie cocktail has some great flavors in the mix, thanks to Cassavetes and to the unraveling chaos that director Montaldo follows to the bitter end. That the script leaves so much unexplained works to its benefit in the final scenes, as it’s a given that everyone from taxi drivers, store owners, and news venders to beat cops and police patrol cars are given photos of the mob fugitives and that all of them are reporting directly to the mob. Ennio Morricone’s score is another minimalist moody concoction featuring a couple of distinctive themes with a brooding, brassy quality (like a James Bond score at half-speed)

Blue Underground’s DVD and Blu-ray releases look great and show off the location shooting well (the interiors were all done back in Rome). The sole supplement (apart from trailers) is a new 23-minute “Interview with Giuliano Mataldo,” a career survey of the director, including some details on his entertaining South American-set caper Grand Slam, plus plenty of stories about the production and the shoot, including his take on Cassavetes. “He was a difficult man,” he says, but also helpful with his advice on getting locations and local casting.