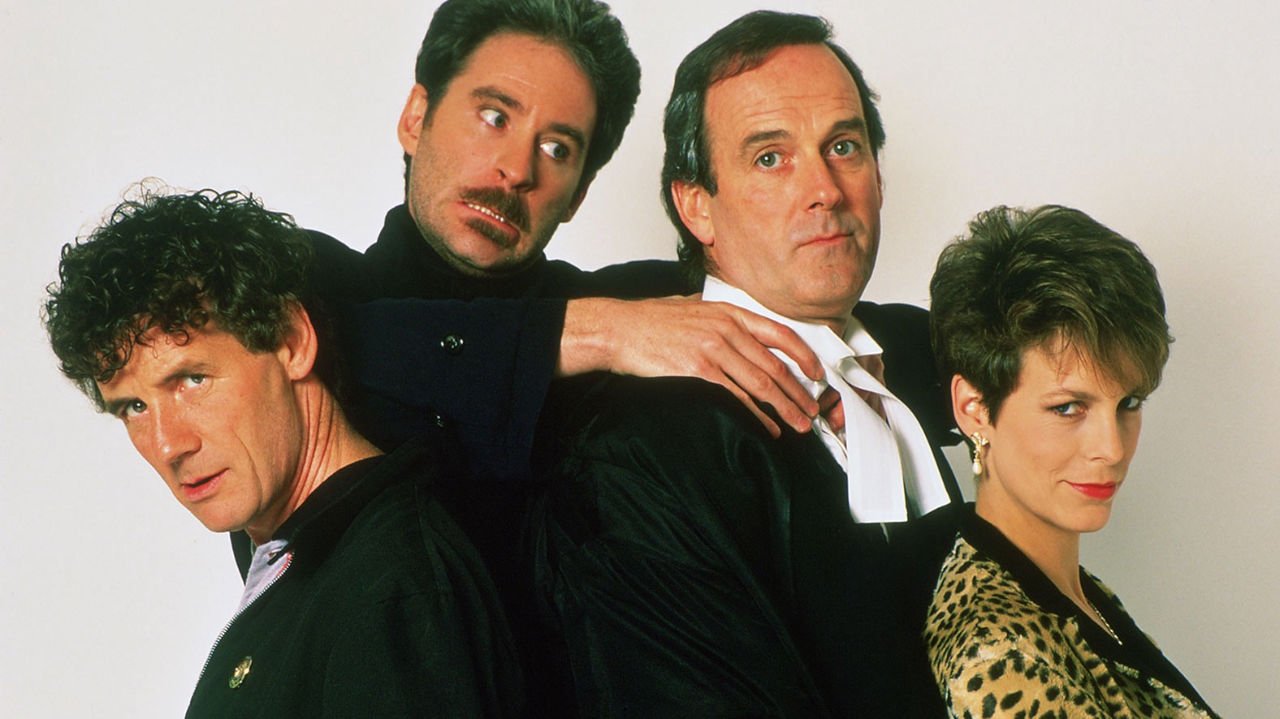 Monty Python alumnus John Cleese writes and stars in A Fish Called Wanda (1988), one of the funniest comedies of the eighties.

Cleese plays frustrated barrister Archie Leach, who winds up in the middle of a double-crossing gang of London jewel thieves when he’s hired to represent a scheming robber (Tom Georgeson) who hid the stash of stolen rocks before he was arrested. It’s his leverage; the gang has to spring him to get their cut.

Jamie Lee Curtis is the manipulative moll Wanda, who sees a more direct route to the haul: seducing Leach to double cross his client. The repressed Leach, stuck in a miserable marriage and a joyless career, is an easy mark but Cleese makes his seduction into a kind of liberation with slapstick flourishes. And besides the sheer mercenary calculation of Wanda’s actions, there’s another roadblock to a future with the sexy American femme fatale: Otto (Kevin Kline), the philosopher psychopath and self-obsessed lothario with a jealous streak where it comes Wanda.

Cleese has never been better, Curtis showed previously-untapped untapped talent for romantic comedy, and Michael Palin is hilarious as a stuttering, animal loving hit man whose efforts to take out a little old lady backfire in the most devastatingly funny and bizarrely morbid ways.

It’s a zippy take on the classic British Ealing Studios caper comedies by way of romantic comedy with a sexy flair. It’s even helmed by Ealing veteran Charles Crichton, director of The Lavender Hill Mob, who collaborated on the script and delivers the witty, sexy, hysterically funny antics with old school professionalism and classic comedy of embarrassment and panic. It was the last film in his career.

Kevin Kline won the Oscar for best supporting actor and John Cleese and Michael Palin both won BAFTAs for their respective performances, while director Charles Crichton and the screenplay by John Cleese and Crichton were nominated by both Academies.

And one trivia note for movie buffs: Archie Leach was the name of the British actor who became famous as Hollywood superstar Cary Grant. Cleese once joked that it was the closest he’d ever come to being like Grant.