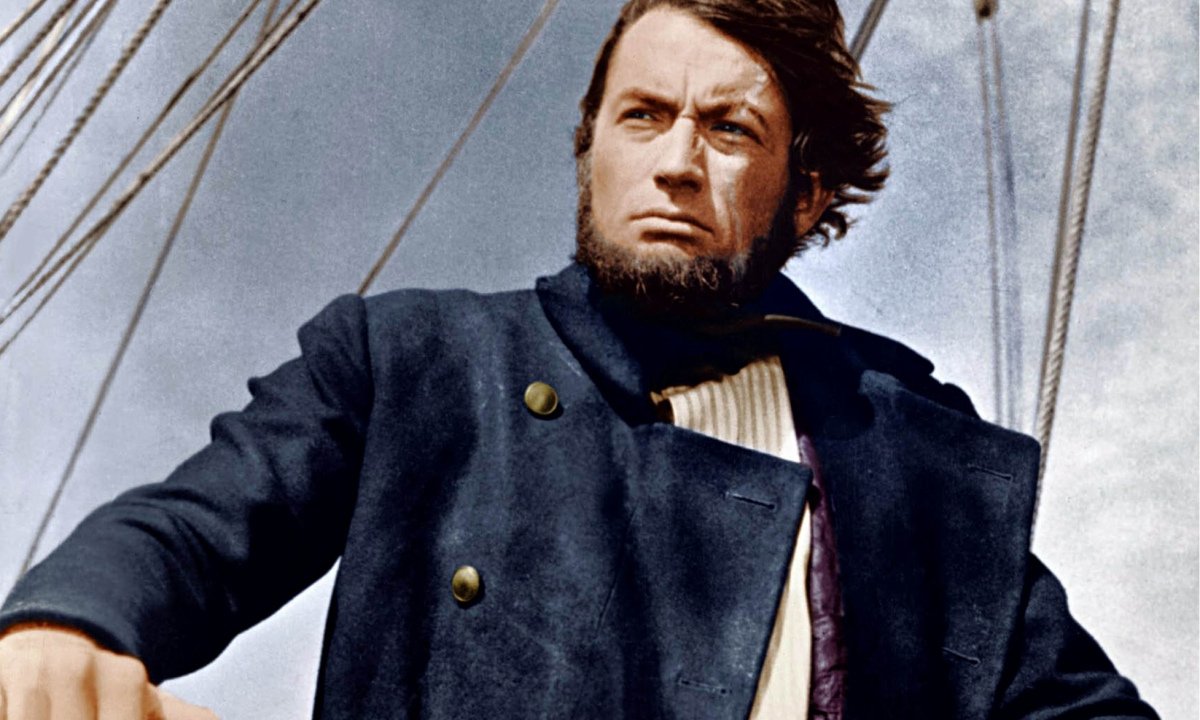 John Huston’s 1956 film of Moby Dick (1956), Herman Melville’s whaling drama turned epic odyssey and a classic of American literature and a staple of high school and college literature courses, remains the most famous screen version of the novel. Gregory Peck plays the obsessed Captain Ahab, who lost his leg to “the great white whale” and is determined to hunt it down, and Richard Basehart is Ishmael, the young deck hand who narrates the tale.

Peck plays Ahab with a stiff, emotionally unreadable determination, Orson Welles (who had directed his own stage adaptation of the novel) has a superb supporting role as Father Mapple, giving a sermon filled with whaling references in a pulpit designed like the prow of a ship, and Leo Genn is first mate Starbuck, who tries to resist Ahab’s obsessive drive.

Huston gravitated toward literary adaptations throughout his career and Moby Dick was a personal project for Huston. He collaborated with Ray Bradbury on the screenplay—it was the celebrated author’s first feature screenplay—and remained faithful to language (Bradbury helps adapt the poetry of Melville’s prose to the spoken word of a script) and to the story with minor changes.

The film was not well received in 1956, much of the criticism leveled at Peck, but his stylized performance is more interesting 60 years later. Huston’s treatment is equally compelling. He shot much of the film on the sea with a full-sized ship and a massive model for the whale and devoted himself to recreating the physical labor of whaling in the 19th century with almost documentary-like detail. He also worked with cinematographer Oswald Morris to give the film a desaturated color palette, a sepia quality that helps evoke the era. It adds to the film’s mythic quality.

), iTunes, GooglePlay and/or other services. Availability may vary by service.
Moby Dick [Blu-ray]

On DVD from Kino and Blu-ray in a limited edition from Twilight Time in a restoration / reclamation that recreates Huston’s unique color scheme—it has a burnished, earthy look, a palette of ivory and stained wood and pale skies, strikingly different from the previous DVD release and a far cry from the bright, saturated colors we expect from our Technicolor restorations—and correct aspect ratio of 1.66:1. The sepia quality evokes the engraving and illustrations of the whaling era. Twilight Time’s Blu-ray is part restoration and part recreation; colorist Greg Kimble spent eight months using digital tools to enhance the remastered materials and recreate Huston’s original color palette (read Robert Harris on the issues with the original elements). This is a labor of cinematic love.

The featurette “A Bleached Whale: Recreating the Unique Color of Moby Dick” goes into the process of recreating Huston’s original color palette with colorist Greg Kimble. Also features a new commentary track with Twilight Time’s house historians Julie Kirgo and Nick Redman joined by film historian Paul Seydor, a gallery of stills, the original trailer, an isolated score, and a booklet with an essay by Julie Kirgo. Limited to 3000 copies.