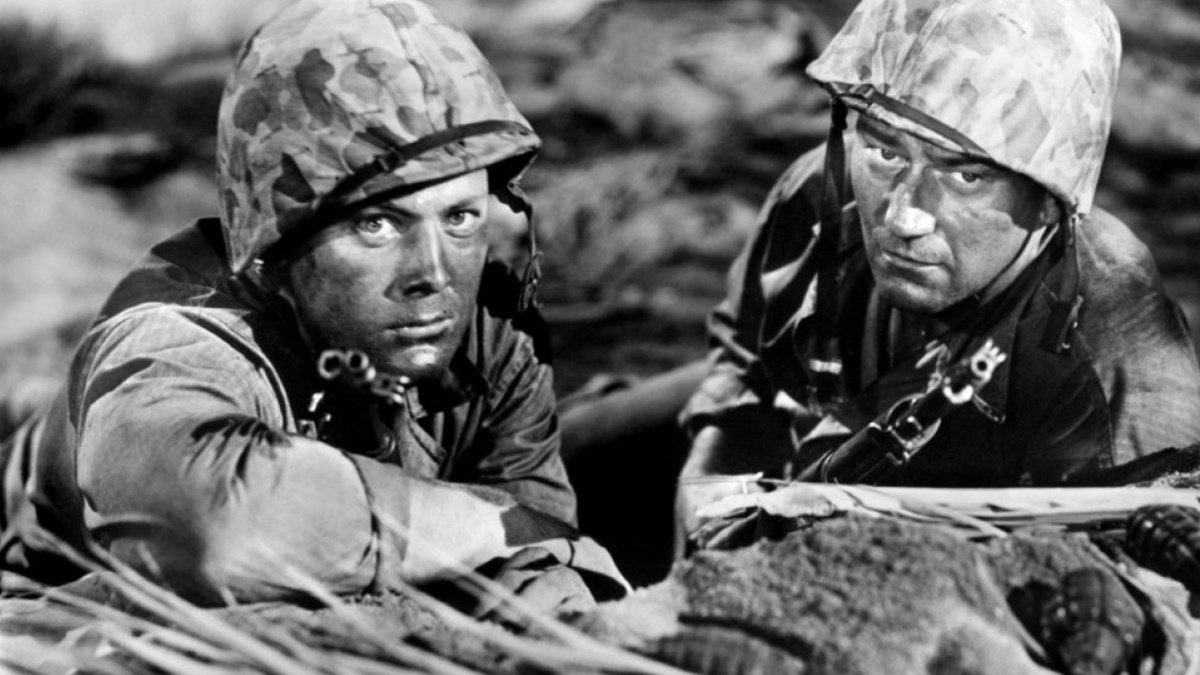 Sands of Iwo Jima (1950) is the best war film that John Wayne made outside of John Ford’s masterpiece They Were Expendable. Made four years after the end of the war in 1949, it was the biggest picture that Allan Dwan, once a major director of big silent movie spectacles and handsome star vehicles, had made in decade, and it was a rare role for Wayne to show a darker side of his persona. Wayne never served in the war but on the big screen he became the icon of the patriotic soldier ready to sacrifice himself for his country, an irony that haunted the actor. Perhaps his anxiety helped push his performance, which earned him his first Academy Award nomination.

Wayne’s films for Republic, a former B-movie studio with aspirations to class and critical recognition, were generally the studio’s biggest productions through the 1940s—they even got John Ford to direct Wayne in a couple—but most of them cast Wayne in conventionally heroic roles. Sands of Iwo Jima, co-written by regular Wayne screenwriter and drinking buddy James Edward Grant, has a patriotic charge and a sentimental streak and the signature moment, of course, is the raising of the American flag on Iwo Jima, the photograph that made the cover of Life magazine and became the iconic image of the United States Marine Corps in World War II.

In counterpoint is the grueling training in boot camp, the horror of combat (watch them endure the moans of a wounded soldier in no man’s land, left alive by the enemy to lure victims into their sights), and the seemingly tyrannical command of Wayne’s Sergeant Stryker, the epitome of the veteran Marine. He’s tough and pitiless when it comes to training his recruits and leading his men into battle and they despise what they see as his sadistic abuse, but of course that training is what ultimately keeps them alive and binds them as a fighting force.

With the war over, Hollywood was free to present a more complex portrait of men in war and Wayne was a perfect vehicle for it. Audiences knew him as the uncomplicated hero so such shadings—like a drinking binge that leaves him an angry, somewhat self-pitying drunk—were unexpected. It reveals him as a vulnerable and damaged man who sacrificed almost everything for his service. John Agar, Richard Jaeckel, and Forrest Tucker are among the soldiers shaped by Wayne’s leadership.

It was nominated for four Academy Awards all told, including a nod for the original screen story by Harry Brown.

Add to My Amazon Prime Watchlist

The film was recently remastered from archival film elements for special Veteran’s Day theatrical showings in advance of the Blu-ray and DVD release. It’s not restored but the new edition brings out the detail from the archival elements, which look quite good. No supplements.