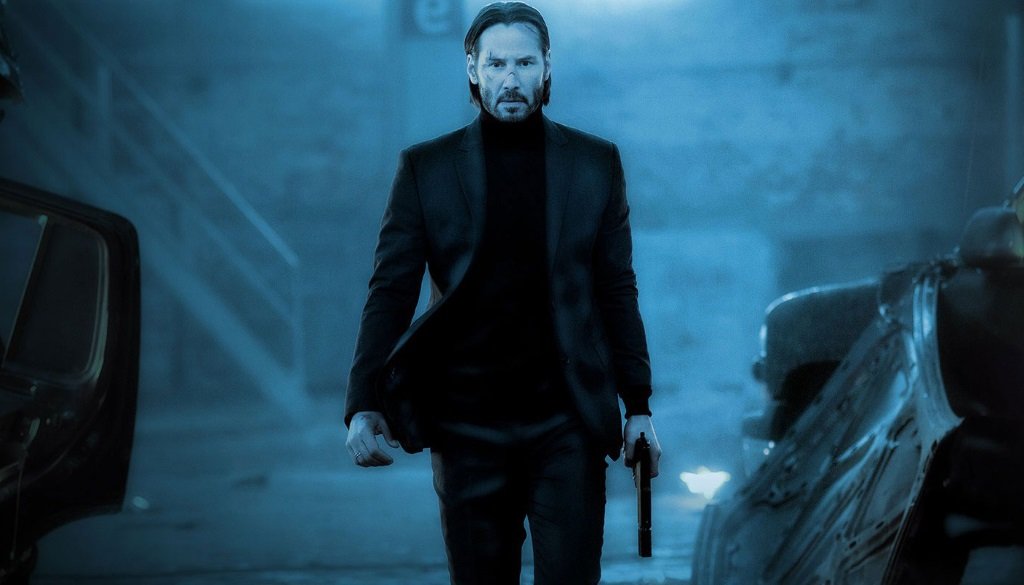 John Wick (2014) is the kind of action movie that Hollywood rarely makes anymore: simple, streamlined, with action scenes that rely on physical rather than computer generated elements. Keanu Reeves plays the titular character, a former assassin for the Russian mob (led by Michael Nyqvist) who is roused from retirement when a group of thugs led by his old boss’s sadistic son (Alfie Allen) go after him while he’s mourning the death of his wife.

It’s a revenge film, pure and simple, built on elements right out of pulp fiction and crime soap operas and an elaborate criminal underworld that could have been thought up in a comic book. And it is non-stop action of the old-fashioned kind. Digital effects are used to stylize the imagery and frame the set pieces, but the action scenes themselves are all about human bodies in motion, creative choreography, and impressive stunts, punctuated by bullets and explosions.

Chad Stahelski gets sole screen credit as director but it’s understood that David Leitch (credited as a producer) co-directed. Both are veteran stuntmen and stunt coordinators and they build the film with minimal dialogue, basic motivations, and elaborately designed action scenes, often in close quarters, the better to show off the fighters. Reeves is an accomplished martial artist in his own right and he looks great in action.

Not to make too much of this, it’s an updated version of a 70s drive-in revenge movie with the look of a graphic novel. You go with the anger of a wronged man with killer skills and enjoy the ride. Adrian Palicki (Agents of S.H.I.E.L.D.) is a rival assassin, Ian McShane plays the manager of the underworld sanctuary The Continental and Willem Dafoe carves out a memorable character in a few brief scenes.

No surprise, given its origins, that the World Stunt Awards voted it the best fight of the year.

Blu-ray and DVD includes six featurettes, including a look at the stunt choreography and preparation and a featurette on the second unit. Exclusive to the Blu-ray is commentary by the two directors and a bonus DVD and Ultraviolet Digital HD copy of the film.