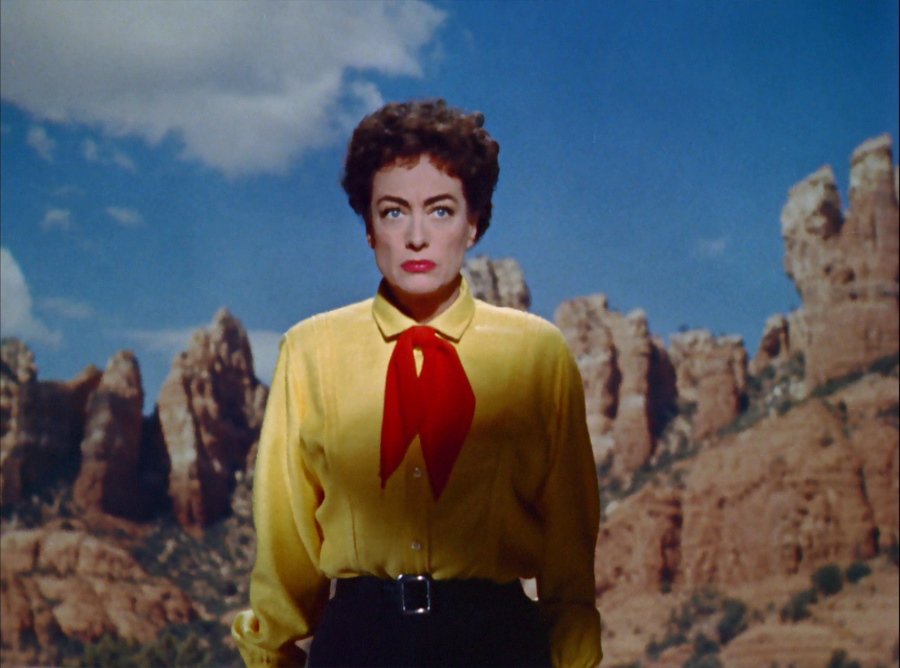 In Johnny Guitar (1954), Joan Crawford’s Vienna is the most masculine of women western heroes. A former saloon girl who earned her way to owning her own gambling house, she’s a mature woman with a history and she’s not ashamed of what she did to carve out her claim for a future.

Directed by Nicholas Ray and starring Crawford and Mercedes McCambridge as frontier entrepreneurs in a war of wills, Johnny Guitar is one of the most unusual westerns of its era, or any era for that matter. It’s dense with psychological thickets and political reverberations (including a not-so-veiled allegory for the McCarthy witch-hunts in Hollywood), designed with color both expressive and explosive, and directed with the grace of a symphony and the drama of an opera.

Sterling Hayden plays the title character, a lanky, affable cowboy who wanders into Vienna’s saloon in the opening minutes and serves as witness to the dramas bubbling up in this frontier community in the hills. But his acts of heroism aside, he’s the equivalent of the stalwart girlfriend watching the showdown between Vienna and the Emma Small (Mercedes McCambridge). She’s the town banker and moral arbiter whose power is threatened by Vienna (her saloon is built on the site of the railway line) and whose shameful desire for a bad boy miner (Scott Brady) flares up into vengeance against Crawford, the object of his desire.

The film’s dynamic first act occurs almost entirely within the confines of the gaming room of her saloon, with characters arriving, engaging, and exiting in dramatically timely fashion, but the effect is anything but stagebound or theatrical. Ray directs the rise and fall of the drama and the interplay and evolution of stories like a symphony, a sustained piece with themes and movements that builds to the climactic kiss between Vienna and Johnny and one of the greatest lyrics ever spoken in a western: “Lie to me. Tell me you love me.”

This is a clash of wills that erupts in fire and destruction with the two players taking on roles out of a modern myth. Emma, leading a lynch mob while still in a black mourning dress, confronts Vienna, clad in a soft, white, elegant gown while playing the saloon’s piano: the dark, angry fairy tale witch taking on the innocent heroine, though Vienna is anything but innocent. And when Vienna sets the place on fire and practically dances in triumph, a black figure against the bright flames, she’s the wicked witch incarnate, but symbolism aside, the scene burns deep and hot with rage and revenge unleashed.

Jean-Luc Godard once made the claim that “Nicholas Ray is cinema.” Johnny Guitar is evidence to support his case.

Olive gave the film its DVD and Blu-ray debut a few years ago. Now it gets the deluxe treatment in a new 4K restoration and it looks amazing. The saturation of the color (and this is a film where the reds and yellows of the costumes explode from the screen) is intense and the image has magnificent a sharpness and clarity. And the film finally is released in its original aspect ratio.

New to this edition is commentary by film critic and scholar Geoff Andrew, the featurettes “Johnny Guitar: A Western Like No Other” (18 minutes) and “Johnny Guitar: A Feminist Western?” (15 minutes) with critics Miriam Bale, Kent Jones, Joe McElhaney, and B. Ruby Rich, “Tell Us Was She One of You: The Hollywood Blacklist and Johnny Guitar” with historian Larry Ceplair and blacklisted screenwriter Walter Bernstein (11 minutes), “Free Republic: Herbert J. Yates and the Story of Republic Pictures” with archivist Marc Wanamaker (6 minutes), and ” My Friend, the American Friend” with Tom Farrell and Chris Sievernich discussing Nicholas Ray (12 minutes). Carried over from the previous release is a short video introduction by Martin Scorsese, which was recorded for the film’s VHS release last century. The accompanying booklet features an essay by Jonathan Rosenbaum.