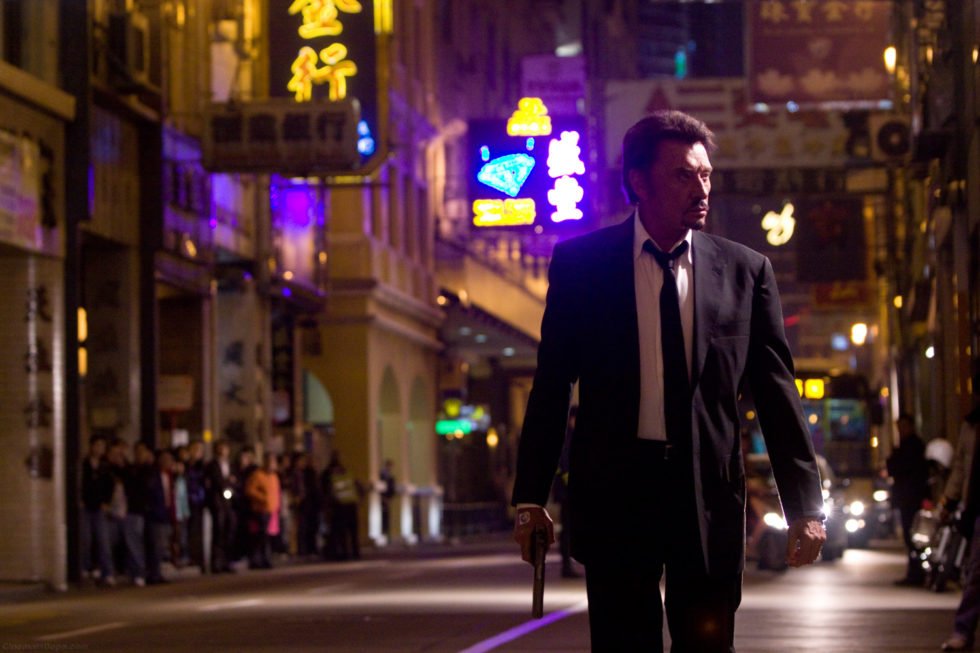 Johnnie To, the reigning king of the crime movie and the romantic code of gangster brothers within the mercenary world of organized crime, delivers another perfect little genre piece with Vengeance (Hong Kong, 2009).

French pop legend Johnny Hallyday stars as Costello, a retired pro who comes to Macau to take revenge on the men who attacked his daughter’s family. He’s a Frenchman in China who doesn’t speak the language, but in a way he does: as a former criminal professional himself (long since retired to become a chef and raise a family) he reads the signs and finds the men who can help him navigate the local underworld and back him up, and wouldn’t you know they are To’s eternal crew: Anthony Wong, Lam Suet, Lam Ka Tung and the recurring cast of the honorable mercenaries who privilege professionalism above everything but brotherhood and justice. They find both in this Frenchman’s quest, even though it means taking on their sometime-employer, decadent crime boss Fung (Simon Yam).

Gaunt and weathered, Hallyday is superb casting (and reportedly a last minute substitution for original choice Alain Delon) and slips right in to To’s brand of taciturn camaraderie and silent communication, whether sharing meals and under fire, and there’s plenty of both here. Adding another layer of genre tragedy to the odyssey, Costello is losing his memory; he snaps Polaroids (a Polaroid camera! How old school!) of his new compatriots to hold on to the identities just long enough to reach his goal. And, of course, he is loved by the homeless children who revolve around the beach retreat as he becomes den mother and cook, another sign of his purity.

To has a way of shaping his genre dramas to their essential elements and then sculpting beautiful action scenes around them, and Vengeance has some of his best pieces, including an almost abstracted shoot-out in a garbage dump where the ambushed team ducks behind bales of scrap and then pushes them along as a rolling cover and sometime weapon. My favorite scene, however, is when the newly-bonded team revisit the scene of the crime and reconstruct the massacre wordlessly through nods and gestures (with flashbacks illustrating their silent dialogue for the rest of us) while Costello cooks up a dinner from what he finds in the kitchen, a ritual meal that seals their partnership. When they do converse in words, it is in their only shared spoken language: English.

Not rated, in Cantonese and French with English subtitles

On DVD from MPI with the featurette “Johnny x Johnnie,” a standard Hong Kong promotional featurette with lots of mutual-admiration interviews with To and the cast (in Cantonese and English) and behind-the-scenes footage: not very informative (and curiously missing any interviews with Hallyday) but pleasant company for ten minutes.