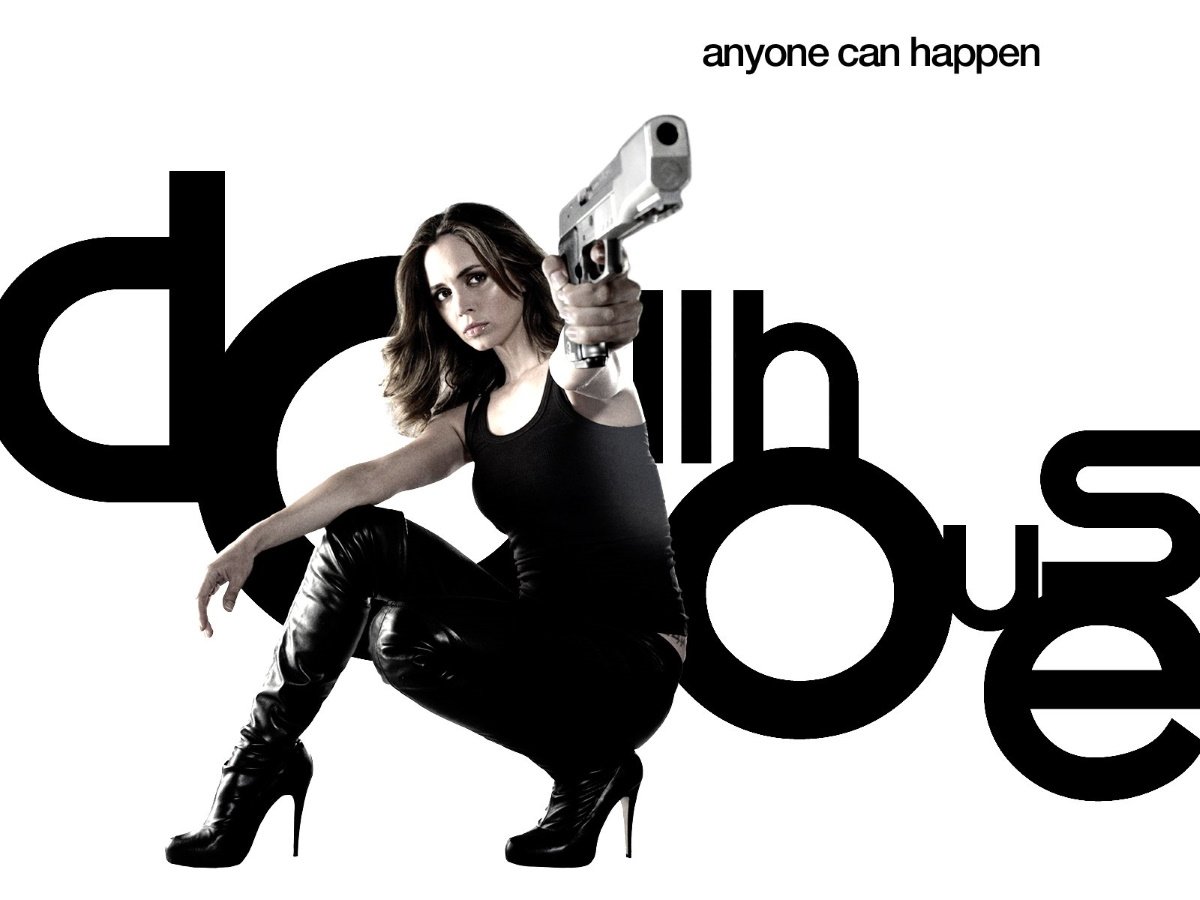 The Dollhouse is a (quite literally) underground company that imprints elaborate identities and accompanying skills onto its otherwise blank roster of operatives developed. Buffy alumnus Eliza Dushku is the company’s star player, playing everything from sexual fantasies to secret agents for the company’s deep-pocket clients, and Harry Lennix is her handler, protective of his charge and suspicious of the moral implications of the business. The experiments in brainwashing and social engineering are conducted on model-perfect subjects in zen-like surroundings and then field tested in action on assignments, which come under scrutiny by a dogged FBI agent Paul Ballard (Tahmoh Penikett) whose investigations leads him down the conspiracy rabbit-hole.

Enver Gjokaj, Dichen Lachman, and Miracle Laurie play the fellow doll operatives, Fran Kranz is the resident boy nerd tech genius with a rather soft moral foundation, Amy Acker is one of the techs, and Olivia Williams runs the whole program as Dollhouse director Adelle DeWitt.

The series was a slow starter, with Whedon trickling out character backstories and hints of conspiracies, but by the end of the season, the stories and the concepts gelled into provocative science fiction with metaphysical dimensions. The original season conclusion, “Epitaph One,” is a “Dollhouse” apocalypse set in 2019 with flashbacks to the Pandora’s Box unleashed by the technology in the show. It was not aired as part of the original show and debuted on the DVD release, but it has been restored to the streaming season.

The second and final season was less a renewal than a brief reprieve. The low rated show got an additional 13 episodes before it was cancelled for good, but they are inventive episodes filled with hidden agendas, double-edged writing and characters that ping-pong between personalities. It becomes clear that Echo is holding on to pieces of her imprints as she goes through her assignments, as are some of her fellow dolls. Meanwhile Echo’s protective handler is promoted to head of security and Paul, the former FBI agent, joins the company as Echo’s new handler and partner in taking it down.

Sorting through the motivations and the prime personas working their way through the imprinted personalities gives multiple levels to the drama. Meanwhile the moral implications take on epic proportions when the technology that wipes and imprints personalities is honed to operate at a distance, on civilians as well as dolls. And just wait until you get to finally explore “the attic.”

Whedon didn’t have time to create a neat conclusion but he makes the edgy implications of the final episodes zing and caps the show with “Epitaph 2: The Return,” a sequel to the Dollhouse apocalypse episode from the first series. The series finale jumps ahead decades and is remarkably satisfying. Though not quite self-contained, the show has a remarkable integrity for being so brief (a mere 26 episodes over two short seasons) and invites repeat viewings.

Reed Diamond stands out as a cold-blooded agent, Alan Tudyk appears as a former subject whose time as a doll has made him psychotic, and Whedon veterans Summer Glau and Alexis Denisof have recurring roles.

The Blu-ray and DVD releases are filled with bonus supplements.

Season One includes unaired pilot “Echo,” which offers a darker start to the show, more like a feature film than a TV episode, and it jumps us right into the mythology and morality that the series proper wades into much more slowly. Also includes the unaired thirteenth episode “Epitaph One,” commentary on three episodes, and featurettes.

Season Two includes the unaired finale “Epitaph 2: The Return,” commentary by Joss Whedon on the second season premiere episode and writers Jed Whedon and Maurissa Tancharoen on an additional episode, and two featurettes.