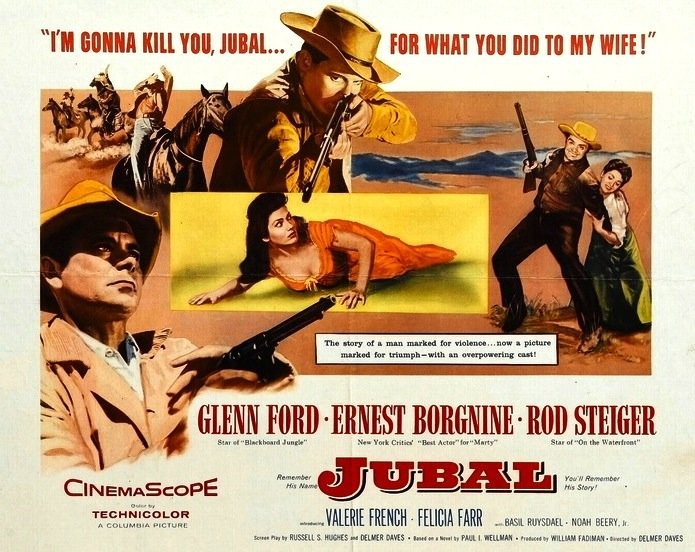 Delmer Daves was a Hollywood pro with a long career and an impressive filmography when he made Jubal (1956). A screenwriter turned director, Daves moved easily between all genres—war pictures, romances, westerns, Biblical epics, and a few noir-inflected dramas—and oddly enough found his biggest success in glossy melodrama A Summer Place, but I think he was at his best on the frontier. He proved his affinity for the western from his very first effort in the genre, the 1950 classic Broken Arrow. Along with his fine eye for imagery, Daves brought a psychological dimension and an adult sensibility to his westerns, and in his best films, his characters had relationships and emotions that came out of real life.

Jubal is the first of three westerns Daves made with actor Glenn Ford, already a seasoned western presence by 1956. Here he’s an itinerate cowhand and a wary loner hired by rancher Ernest Borgnine, a garrulous, generous guy who becomes both father figure and best friend to the emotionally bottled up cowhand. It’s been called “Othello” on the range, with Rod Steiger as the bitter ranch hand playing Iago to Borgnine’s Othello, but the Desdemona of this piece is no innocent victim but a dark, exotic beauty (she’s Canadian, apparently to explain away Valerie French’s accent) in a stifling marriage to the sincere but crude and boisterous cattleman. Young and deeply disenchanted, she sets her eyes on the simple, stoic cowboy.

This is less a Shakespeare western than a Hollywood melodrama in chaps and Daves was a seasoned hand at both genres. He favors suspense to action and violence, tightening the tension until Steiger (himself spurned by French) finally pushes his boss over the edge and the cycle of violence begins. Even then, the violence is brief and abrupt and Daves leaves the most brutal assault offscreen. Noah Beery Jr. and John Dierkes offer easy-going support as Ford’s friendly bunkmates and fellow cowhands and Charles Bronson takes a small but key role as a plain-speaking cowhand whose loyalty to Ford’s Jubal is unshakable even when Steiger turns the town against him. Daves brings out Bronson’s easy-going humor and understated style, a side so rarely tapped by other directors.

Shot in the Grand Teton country of Wyoming in CinemaScope and Technicolor, it’s an exceedingly handsome film and Daves fill the widescreen frame with the magnificent mountain backdrops and dramatic forests and rolling hills, without allowing the majesty to overwhelm the human drama.

The Criterion Blu-ray and DVD offer a restored 4K digital film transfer and come with a booklet with an essay by Kent Jones.