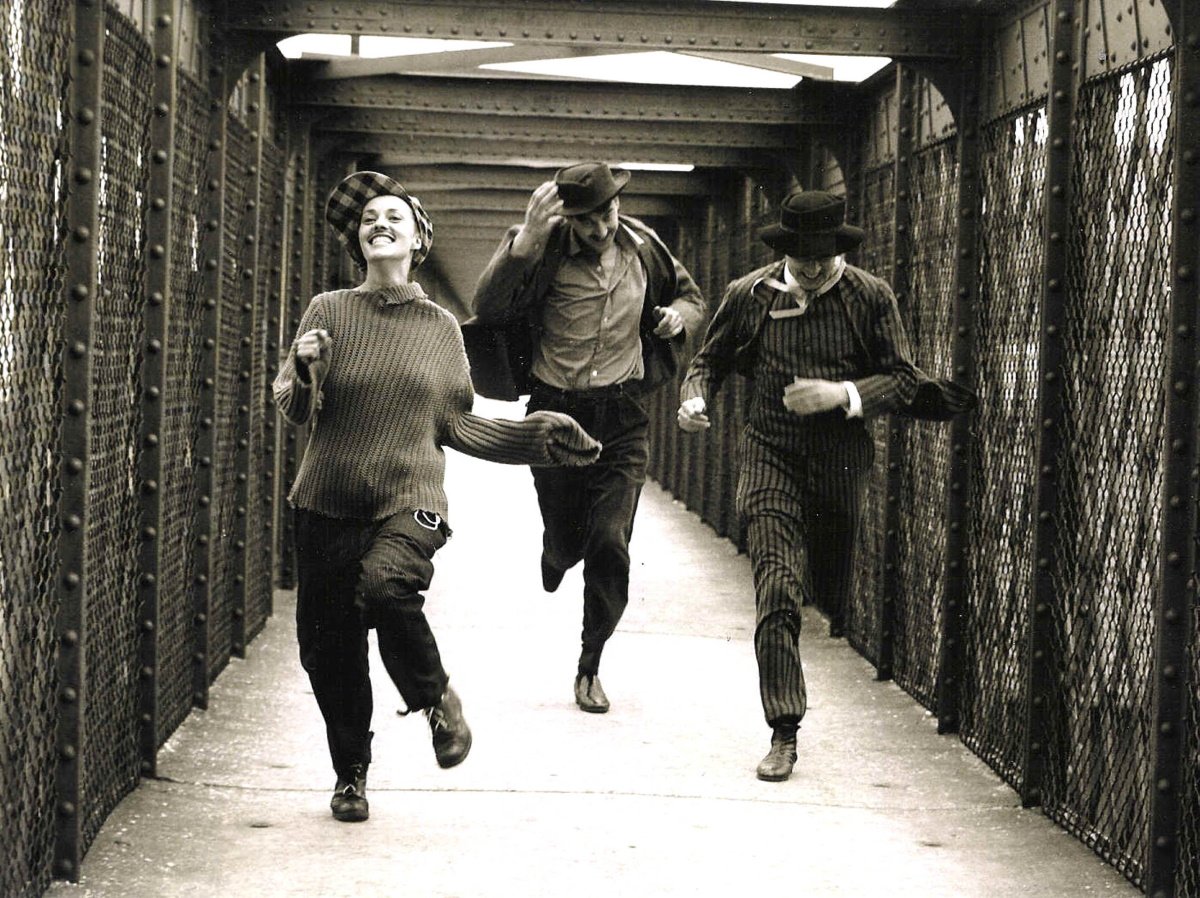 Jules and Jim (France, 1962), the third feature from French New Wave icon François Truffaut, may be named for the two best friends who become virtually inseparable in pre-World War I Paris but it is centered on Jeanne Moreau’s Catherine, the woman both men love.

Adapted from the novel by Henri-Pierre Roche, Truffaut’s picture explores the thirty year friendship between Jules (Oskar Werner), a vibrant, young Austrian biologist on slow, melancholy slide, and Jim (Henri Serre), the enigmatic, introspective Parisian writer who becomes his best friend. A love triangle forms when the alluring Catherine makes the duo a trio. Spontaneous and lively, a woman of intense but dynamic emotions, she becomes the axle upon which their friendship turns as Jules woos her and they marry, only to find that no one man can hold her.

Directed in bursts of concentrated scenes interspersed with montage sequences and newsreel clips pulled together by the commentary of an omniscient narrator, Truffaut layers his tragic drama with a wealth of detail. He draws upon his bag of New Wave tricks for the carefree days of youth—rapid zooms, flash cuts, freeze frames, handheld shots taken literally on the run—which disappear as the marriage disintegrates during the gloom of the post war years.

Oskar Werner is excellent as Jules, vibrant young man whose slow, melancholy slide to emotional compromise is charted in his increasingly sad eyes and resigned face, while Henri Serre plays Jim as more of an enigma, guarded and introspective. But both are eclipsed in the glare of Jeanne Moreau’s radiant Catherine: impulsive, demanding, sensual, passionate, destructive, and ultimately unknowable. It is an intense performance steeped in mystery and enigma.

It was a scandal upon its release for its unapologetic treatment of a menage-a-trois. Now it is embraced as a masterpiece of the French New Wave and one of Truffaut’s most confident and accomplished films.

Add to My List on HBO Max or to My List on Criterion Channel or stream free on Kanopy, which is available through most college and public library systems.

Also on Blu-ray and DVD and on SVOD through Amazon Video, iTunes, GooglePlay, Vudu and/or other services. Availability may vary by service.
Jules and Jim (Criterion Collection) (Blu-ray + DVD)

Criterion Collection Blu-ray and DVD releases features a 2K digital film transfer and released in a dual-format edition. Carried over from the earlier DVD edition are two commentary tracks (one by co-writer Jean Gruault, Truffaut collaborator Suzanne Schiffman, editor Claudine Bouche, and Truffaut scholar Annette Insdorf, the other featuring actress Jeanne Moreau and Truffaut biographer Serge Toubiana), excerpts from the 1985 documentary The Key to Jules and Jim about the author Henri-Pierre Roche, an episode of Cineaste de notre temps from 1965 dedicated to Truffaut, and a segment from the series L’Invitie du Dimanche from 1969 with Truffaut, Moreau, and filmmaker Jean Renoir, footage of Truffaut interviewed by Richard Roud at the 1977 New York Film Festival, excerpts from Truffaut’s presentation at a 1979 American Film Institute “Dialogue on Film,” a 1980 archival audio interview with Truffaut conducted by Claude-Jean Philippe, video interviews with cinematographer Raoul Coutard and co-writer Jean Gruault, and a video conversation between scholars Robert Stam and Dudley Andrew. The accompanying booklet features an essay by critic John Powers, a 1981 piece by Truffaut on Roché, and script notes from Truffaut to co-screenwriter Gruault.