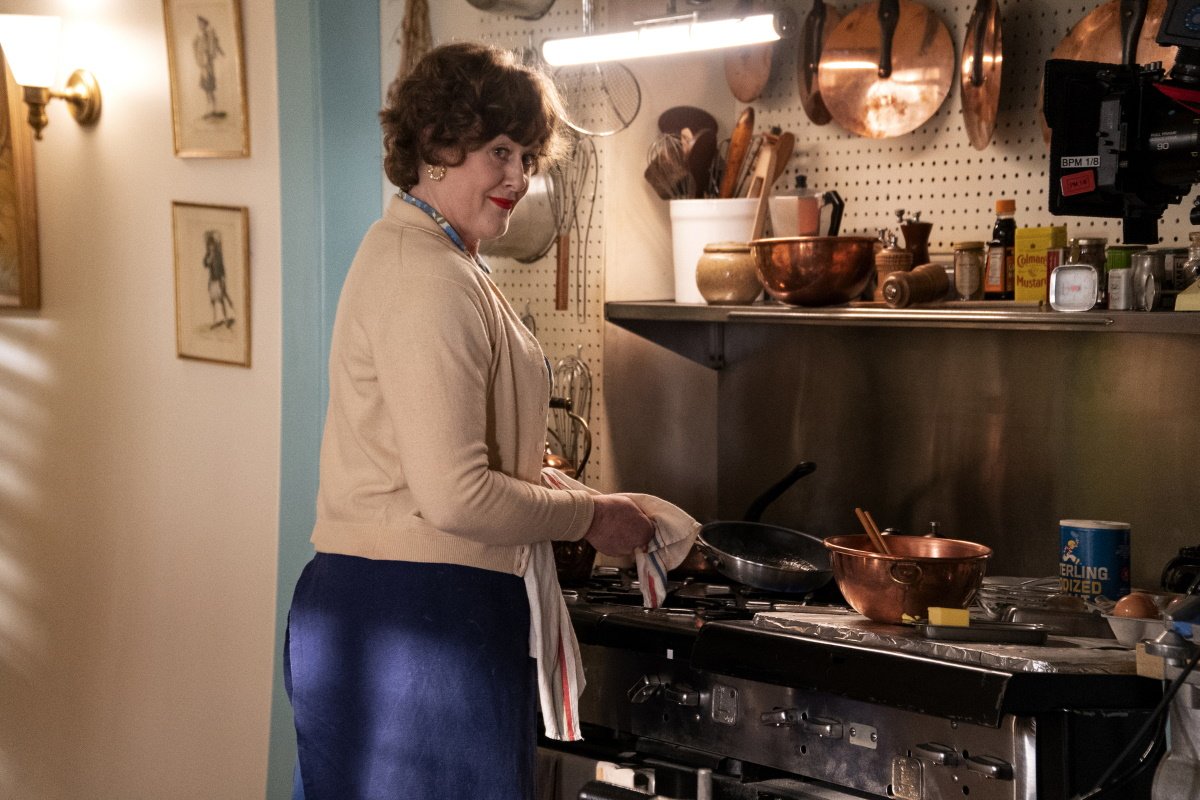 Sarah Lancashire is all bubbly exuberance as Julia Child in “Julia” (TV-MA). The eight-episode limited series takes on the life and career of the woman who pioneered the modern cooking show and brought fine cuisine into American homes in the long-running PBS series “The French Chef.” This 1960s period piece also celebrates her loving and mutually supportive marriage with her supportive husband (David Hyde Pierce), along with foodie spectacle and a tribute to the beginnings of public television together in a drama sprinkled with light humor. Bebe Neuwirth, Brittany Bradford, and Fran Kranz costar. Three episodes available, new episodes on Thursdays. (HBO Max)

Oscar Isaac brings one of the lesser known heroes of Marvel Comics to the small screen in “Moon Knight: Season 1” (TV-14), playing a man with dissociative identity disorder who shares a body with mercenary. It’s a superhero show with a twist of psychological drama and ancient Egyptian gods. Ethan Hawke costars. New episodes on Wednesdays. (Disney+)

“The Girl From Plainville” (TV-MA), a limited series inspired by the true story of Michelle Carter, who encouraged her boyfriend to kill himself through texts, stars Elle Fanning as Michelle and costars Chloë Sevigny, Colton Ryan, and Norbert Leo Butz. Three episodes available, new episodes on Tuesdays. (Hulu)

Remembrance and flights of fancy intertwine in “Apollo 10 1/2: A Space Age Childhood” (2022, PG-13), Richard Linklater’s animated tall tale of a man (Jack Black) who recalls his childhood in 1969 Houston as an elementary-school astronaut who is secretly sent to the moon by NASA. Linklater uses rotoscope animation over live action footage to create his fantasia of boyhood dreams and imagination driven by a fascination with the Apollo missions. (Netflix)

Two sets of parents (Jason Isaacs and Martha Plimpton, Reed Birney and Ann Dowd) meet in church basement after a tragedy has torn their lives apart in “Mass” (2021, PG-13), an intimate drama of loss, guilt, anger, and forgiveness. Actor Fran Kranz makes a powerful feature debut as writer and director, letting the emotions (along with the details of the past events) slowly emerge through the course of the day. The cast won the ensemble prize at the Film Independent Spirit Awards. (Hulu)

Kenneth Branagh is back as Agatha Christie’s detective Hercule Poirot in “Death on the Nile” (2022, PG-13), a sequel to “Murder on the Orient Express.” This time the murder occurs during the lavish honeymoon cruise of a beautiful heiress (Gal Gadot) on a ship loaded with likely suspects. The star-studded cast of suspects includes Annette Bening, Russell Brand, Armie Hammer, Rose Leslie, Sophie Okonedo, Letitia Wright, and Tom Bateman, who compete with the 1930s period costumes and settings and the backdrop of ancient Egyptian landmarks (not to mention Branagh’s restlessly moving camera) for attention. (Hulu and HBO Max)

Director Judd Apatow mines the pandemic for humor in “The Bubble” (2022, R), a comedy set at a British hotel where the cast of a big dinosaur adventure spectacle attempt to finish their film while in lockdown. David Duchovny plays the frustrated star of the increasingly silly franchise and Karen Gillan, Fred Armisen, Kate McKinnon, Keegan-Michael Key, and Leslie Mann costar. For the record, it was indeed produced with the cast and crew in quarantine lockdown, and debuts appropriately enough on April Fools’ Day. (Netflix)

The animated musical sequel “Sing 2“ (2021, PG) adds the voice and music of Bono as a reclusive rock star. Also on VOD and disc and at Redbox.

“Marry Me“ (2022, PG-13), the romantic comedy with Jennifer Lopez and Owen Wilson that arrived on Peacock the same day it opened in theaters, is now also on VOD and disc and at Redbox.

The Oscar-nominated documentary “Writing With Fire“ (Norway, 2021, not rated, with subtitles) looks at India’s only newspaper run by Dalit women.

“Blade Runner 2049“ (2017, R), directed by Denis Villeneuve and starring Ryan Gosling and Harrison Ford, accomplishes a near-impossible feat: it creates a world as visionary and visually entrancing as the original.

True stories: “Trust No One: The Hunt for the Crypto King“ (2022, TV-MA) looks into the suspicious death of the founder of QuadrigaCX and possible connection to fraud.

International passport: “Captain Nova“ (2022, Netherlands, TV-MA, with subtitles) is a science fiction adventure about a soldier travels back into a younger version of herself on a mission to save the world.

International TV: “Tomorrow: Season 1“ (South Korea, TV-MA, with subtitles) follows a young man who is half-spirit and joins a company of grim reapers in the underworld.

If you missed “The Oscars“ (TV-14) on Sunday, you can stream the entire event (from the Red Carpet arrivals to the slap heard ’round the world).

Brad Pitt is an underworld assassin in “Killing Them Softly“ (2012, TV-MA), a stylized trip into the sleazy underworld of low-lifes and mob soldiers.

Streaming TV: the limited series romantic drama “Love Me“ (not rated) and the family drama about a transgender girl navigating transphobia in high school “First Day: Season 2“ (not rated) arrive from Australia.

“Moonshot“ (2022, TV-14) is a science fiction romantic comedy starring Lana Condor and Cole Sprouse as college students who stow away on a space shuttle.

True stories: “How to Survive a Pandemic“ (2022, TV-14) chronicles the multinational race to develop and roll out COVID-19 vaccines in record time and the Oscar-nominated short “When We Were Bullies“ (2021, TV-14) explores a bullying incident from the childhood of filmmaker Jay Rosenblatt.

“Better Nate Than Ever“ (PG) stars Rueby Wood as a middle school theater kid who travels from Pittsburgh to New York to follow his Broadway dreams.

A group of strangers brought together by court-imposed community service get caught up in a crime in the British comedy “The Outlaws: Season 1“ (TV-MA) created by Stephen Merchant, who stars with Rhianne Barreto, Darren Boyd, and Christopher Walken.

The second season of the Scandi-Noir crime drama “Wisting: Season 2” (Norway, TV-14, with subtitles) begins with four new episodes; the rest of the season arrives this summer. (AMC+ and Sundance Now)

Episodes of “How We Roll: Season 1“ (TV-PG), a comedy starring Pete Holmes as a professional bowler, stream Fridays, a day their respective network debuts.

The documentary “Since I Been Down“ (2022) explores the racial history and social impact the three strikes laws enacted in the last century through the stories of prisoners from Tacoma, Washington.

“Live in Concert” spotlights 12 standout concert films, from “Jazz on a Summer’s Day“ (1959), the landmark portrait of the 1958 Newport Jazz Festival, to “Soul Power“ (2008, PG-13) Jeffrey Kusama-Hinte’s portrait of the Zaire 74 soul music festival featuring James Brown, B.B. King, Bill Withers, and Celia Cruz. Among the highlights in between are “Wattstax“ (1973, R) with Isaac Hayes, Albert King, and the Staples Singers, “The Song Remains the Same“ (1976, PG) with Led Zeppelin, and “Sign o’ the Times“ (1987, PG-13) featuring Prince and guest star Sheila E.

Martin Scorsese’s “The Age of Innocence“ (1993, PG), starring Daniel Day-Lewis and Michelle Pfeiffer, explored 18770s New York Society decades before “The Gilded Age,” and with greater depth and nuance. Presented with filmmaker interviews and a documentary featured on the special edition disc.