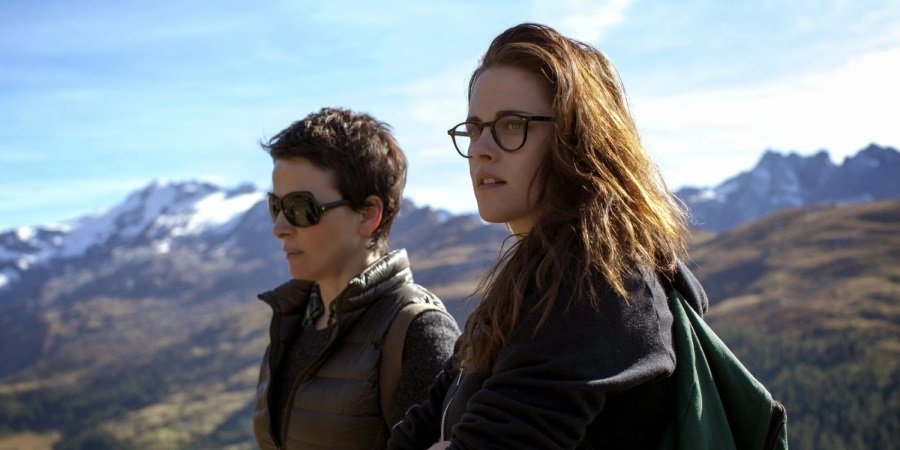 Olivier Assayas wrote this drama about a veteran actress facing a transition in her career after Juliette Binoche, arguably France’s greatest and certainly most ambitious actress working today, challenged him to write a film centered on women. It was a friendly challenge—she had already starred in two films he wrote for director André Téchiné and another, Summer Hours, that he directed from his own script—and Assayas emerged with one of his most beautiful, nuanced, and complex films to date.

Clouds of Sils Maria (France, 2014) doesn’t open on Binoche’s Maria Enders but on her assistant, a worldly American twentysomething named Valentine (Kristen Stewart) who we meet juggling phone calls and scheduling issues in the noisy passageway of a train travelling through the Swiss Alps. In the midst of the journey—Maria is on the way to a tribute to the playwright who wrote her breakthrough part—they learn that the author, a lifelong friend as well as mentor to Maria, has just died. The story plays out in the shadow of his death and the memory of the play that launched the career of the then 18-year-old Maria over 20 years ago. A hot young theater director wants to restage the play with Maria in the role of the older woman, a 40-year-old professional destroyed by the vicious younger woman (it sounds a whole lot like something Fassbinder might have written), and she struggles with it. She can’t relate to what she sees as a pathetic, weak character, but is it because she can’t yet acknowledge that she’s aging out of the dynamic roles reserved for younger actresses? The director (Lars Eidinger) has a different take: they are two sides of the same woman. Maybe that’s what really bothers Maria.

Clouds of Sils Maria could have turned into a rumination on the state of women’s roles and opportunities in the contemporary filmmaking culture as they age into their forties and beyond, but it’s far more personal and introspective than that. The story heads into All About Eve territory when Maria meets her new costar, the young Hollywood phenom Jo-Ann Ellis (Chloë Grace Moretz) who will step into the role Maria originally created. As famous for her provocative offscreen behavior as a celebrity bad girl as for her onscreen intensity, Jo-Ann lives in the center of the social media hurricane and is far more savvy about media outrage than appears; she seems to orchestrate tabloid scandal as often as she simply falls victim to it, though ultimately she is beholden to it in ways Maria can’t really understand.

But Jo-Ann is no Eve Harrington—she’s already found her niche and her stardom and her sense of entitlement doesn’t depend on usurping Maria. This is really about Maria and Val, her assistant and companion and, to take a page from the theater director, a younger version of Maria, still open to the possibilities where Maria has soured on bad experiences. They are not quite real friends but more than employer-employee, a balance that Val understands better than Maria, and their time together plays like a quieter, less fraught reworking of Persona.

Val reads lines opposite Maria, argues over motivation and interpretation, and keeps her company on hikes through the beauty and majesty of the Alps, always conscious of Maria’s personal neediness. Watching the two actresses wrestle with what you could call Maria’s mid-life (or at least mid-career) crisis is like getting a master class in movie acting and interacting. Their relationship is unbalanced, prickly, fraught with unacknowledged anxieties and frustrations, but they have history and Maria has more respect for Val than she realizes. Binoche is sublime as she peels back the layers of Maria’s complicated persona in scenes that show her generosity and sharp perceptiveness colliding with self-regard and caustic commentary covering a fragile ego. Stewart shows a remarkable intelligence as the smart but still growing young woman who is less careful in her private life than she is in her professional capacity as Maria’s PA and she matches Binoche scene for scene. The performance earned Stewart the César, the French equivalent of an Academy Award. She’s the first American actress to win the award.

Also on DVD from Paramount and Blu-ray and DVD special editions from Criterion.
Clouds of Sils Maria

Criterion gives it the Blu-ray edition it deserves along with a new DVD from a new digital master, with new interviews with the filmmaker and stars and the silent 1924 documentary Cloud Phenomena of Maloja by Arnold Fanck that is seen in the film.