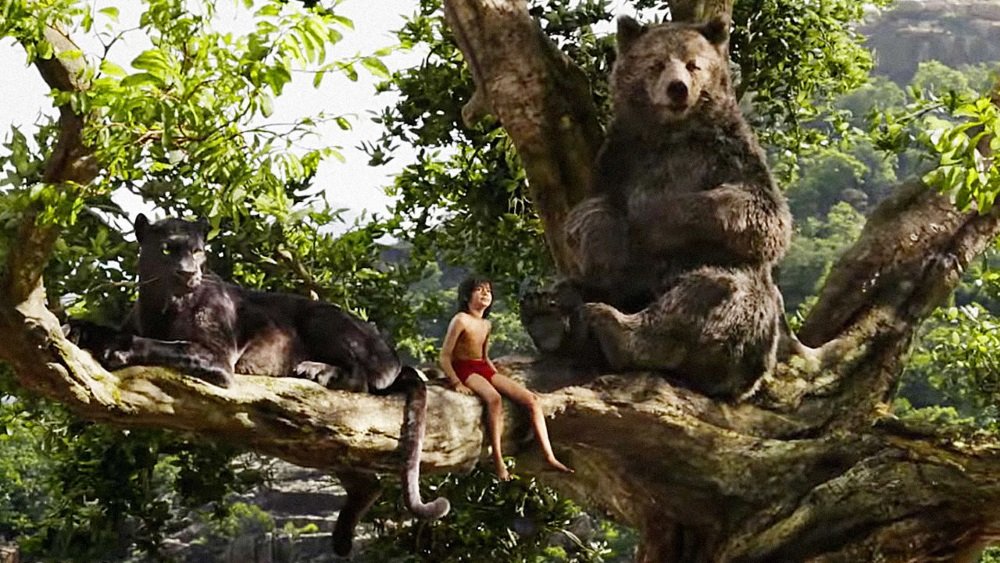 The Jungle Book (2016), Jon Favreau’s live action (or at least photo-realistic) version of the Rudyard Kipling stories, offers far more than the bare necessities as it combines Kipling’s stories and Walt Disney’s 1967 animated musical adaptation for a marvelous new version of the classic story of a boy quite literally raised by wolves.

The basic story is the same we’ve seen in adaptations going all the way back to the 1942 Technicolor jungle fantasy starring Sabu as a teenage Mowgli raised from infancy in the animal kingdom, growing up in a wolf pack, mentored by the wise panther Bagheera, and steeped in the law of the jungle (and specifically Kipling’s poem “The Law of the Jungle,” which is recited at the wolf pack meetings—a terrific addition that this film adds to the big screen mythology). We’ve got the vengeful tiger Shere Khan, the amiable goof-off Baloo the bear, the majesty of the seemingly eternal elephants, and so on. The differences are in the details. Newcomer Neel Sethi is a younger Mowgli (or at least he seems so) than even the 1967 animated musical, a spirited adolescent with the energy and impetuous spirit of a schoolboy in an eternal summer, brimming with both loyalty to his adoptive wolf family and rebellion against Bagheera’s who insists leave the jungle and become part of the human society—for his own safety.

Technically speaking, this marvelously immersive version of The Jungle Book is an animated film with a single human actor in a computer generated world, but the jungle denizens feel so physical and tactile, brought to life with superbly-rendered virtual performances, that it feels more real and grounded than even some superhero movies. The voice actors take it to the next level: Ben Kingsley’s paternal Bagheera, the protective father figure concerned that Mowgli’s human “tricks” will set him apart from the animal ways; Bill Murray’s amiable con artist of a jungle bear pulled out of his indolence by his genuine concern for Mowgli; Lupita Nyong’o as the den mother who raised Mowgli as her own cub and treats him as blood; Scarlett Johansson’s silky hypnotizing voice as Kaa; Christopher Walken bringing a sinister edge to King Louie, the orangutan monarch as bizarro King Kong; and Idris Elba as Shere Khan, his voice dropped to a threatening growl as he terrorizes the jungle into handing the man cub over.

The film has the scope of a myth and the playfulness of a folktale and Jon Favreau, the actor-writer-director who essentially defined the big screen Marvel Comics Universe with Iron Man, proves himself an old school storyteller with 21st century tools and he brings the two together in another of the film’s original touches. As Kaa hisses a mesmerizing tale of Mowgli’s origins, the camera tracks into the snake’s black eye and the shadows of the pupil becomes a cave where find how Mowgli was orphaned and Shere Khan’s face was scarred by the red flower that humans call fire.

Against that drama (and the red fire indeed makes a dramatic appearance in the climax), Favreau and his collaborators give the film a sense of adventure and a playful spirit. They also work two of the original Disney songs into the film, with Baloo and Mowgli singing “The Bare Necessities” while floating down a river and King Louie singing a more threatening version “I Wanna Be Like You.” A more playful version can be heard in the closing credits, which also features Scarlett Johansson doing a torchy version of “Trust in Me.” You’ll want to watch these credit all the way through. The film is framed by the classic storybook flipped open to begin the tale and the end credits turn the pages into CGI pop-ups. It is expressive of the movie itself: a call back to the classic Hollywood era of storytelling with creative flourishes of modern technology.

It won an Academy Award for visual effects and convinced Disney that it could follow up with a photo-realistic CGI remake of The Lion King.

Rated PG and fine for all ages.

and other services
The Jungle Book [DVD]