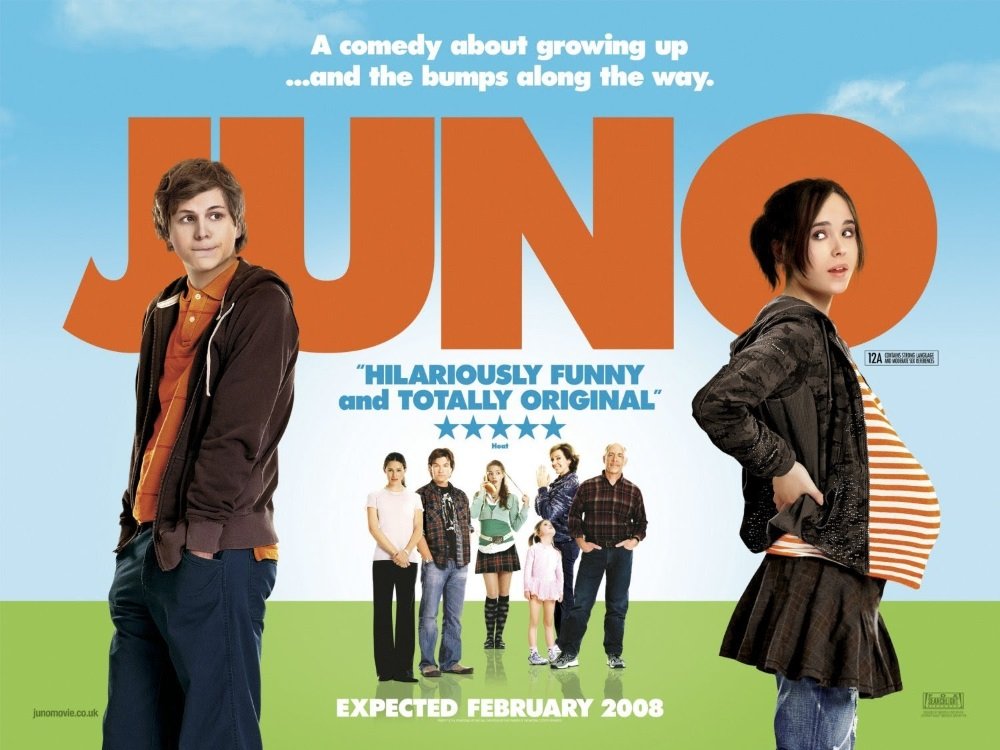 Juno (2007), the feel good film of the pregnant teenager comedy genre, was the success story of 2007, a low-budget comedy with an offbeat sensibility that was embraced by a youth audience and propelled into a mainstream hit.

Ellen (now Elliot) Page is impetuous and funny as the smart-mouthed high-school goofball who finds herself pregnant, the result of an experimental seduction of her hopelessly smitten best friend Bleek (Michael Cera), a Tic-Tac-popping track runner who wants more than anything to be her boyfriend.

She’s under no illusion that she’s ready to be a mom, but the reality of abortion makes her queasy (making yet another American indie that supports the right to choose, and chooses life). She finds the ideal yuppie couple to adopt her sprouting seed: tightly wound professional Jennifer Garner (a brittle stereotype of control and perfection) and easy-going musician Jason Bateman (a grounded free spirit who becomes her big brother of a music buddy), a pair not exactly on the same wavelength.

J.K. Simmons and Allison Janney co-star as her sardonic but unconditionally supportive pop and stepmom, potential caricatures that the performers fill with warmth and paternal protectiveness behind resigned exasperation, and Olivia Thirlby (since gone on to a very successful career) was a discovery as Juno’s spirited best friend.

The Oscar-winning screenplay by Diablo Cody ricochets with askew dialogue but under the cleverness is a very human story of growing up, and Page is engaging and energetic and vulnerable under her self-possessed eccentricity. Watching her rise to responsibility as she watches how adults face up—or don’t—to theirs is affirming in all the right ways. It’s a bundle of joy with heart, charm, intelligence, and wit to spare.