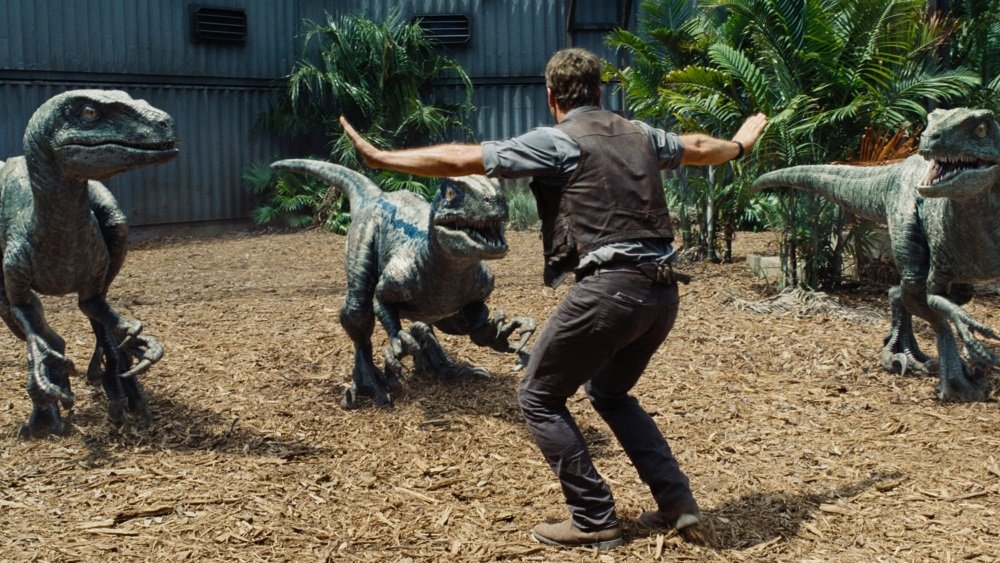 Jurassic World is really what every summer spectacle aspires to be. It’s fleet, it wows audiences with special effects creations that are spectacular and inspired, it delivers romance and humor with the action and suspense, and it sends the audience on a fast and furious ride. It’s not an experience that necessarily sticks with you, but it sure is fun while you’re in it.

It’s been almost 15 years since the last Jurassic installment and World picks up on that gap. By now the real-life-dinosaur theme park is not just up and running but on the verge of becoming too familiar to a public demanding bigger thrills and more spectacular sights (a sly comment on summer tentpoles and franchise sequels?). So the park geneticists, with the blessing of the owner and the conspiratorial collaboration of defense contractors, start brewing up their own creations, mixing and matching DNA until they create something that is outsmarts them. That’s when Owen (Chris Pratt), who is (no joke) training velociraptors, becomes the great white hunter to save the two nephews (Nick Robinson and Ty Simpkins) of all-business park administrator Claire (Bryce Dallas Howard), who gets to evolve from coldly efficient corporate player to hysterical damsel in distress to (for a very brief moment) plucky partner in heroism. Otherwise, she’s forced to rely on that hunky Owen, the dinosaur whisperer.

There really isn’t much personality to these characters, and even less to the creatures, who are simply exhibits or threats, but director Colin Trevorrow manages to bring a sense of awe to the journey even as he recognizes the whole world of franchising, merchandising, and promotion behind the project. There’s a Dr. Frankenstein aspect to the genetic meddling and a Pandora’s Box theme about unleashing power that you can’t control, carried over from previous films. “These people never learn,” remarks Owen, which the audience is surely thinking. It never rises to the level of actual satire but that self-awareness is still a smart little bonus to the adrenaline experience.

And it is a lot of fun, part mindless two-hour theme park ride, part self-aware sequel where supposedly smart people make a cascade of bad decisions. Which, depending on your perspective, makes it either totally unbelievable or a sad commentary on our doomed race. Trevorrow, who was virtually unknown before Steven Spielberg tapped him to helm the revival, came from the offbeat indie Safety Not Guaranteed (2012), a quirky character piece in a time travel story (or is it?), and he makes the jump in scale with a confidence and control that you can see on the screen. And that’s enough for the most part in this variation on a theme.

On DVD, Blu-ray, Blu-ray 3D, and Digital HD and SVOD through Amazon Video

and other services. Availability may vary by service.
Jurassic World [DVD]

Blu-ray, Blu-ray 3D, and DVD with the entertaining interview featurette “Chris and Colin Take on the World” (with director Colin Trevorrow and star Chris Pratt), the production featurette “Dinosaurs Roam Once Again” (on the special effects), and deleted scenes.

Exclusive to the Blu-ray editions are “Welcome to Jurassic World,” which features Trevorrow in conversation with Steven Spielberg, the behind-the-scenes “Jurassic World: All-Access Pass,” and the “Innovation Center Tour with Chris Pratt,” plus bonus DVD and Digital HD editions of the film. The Blu-ray 3D edition features a standard Blu-ray as well.