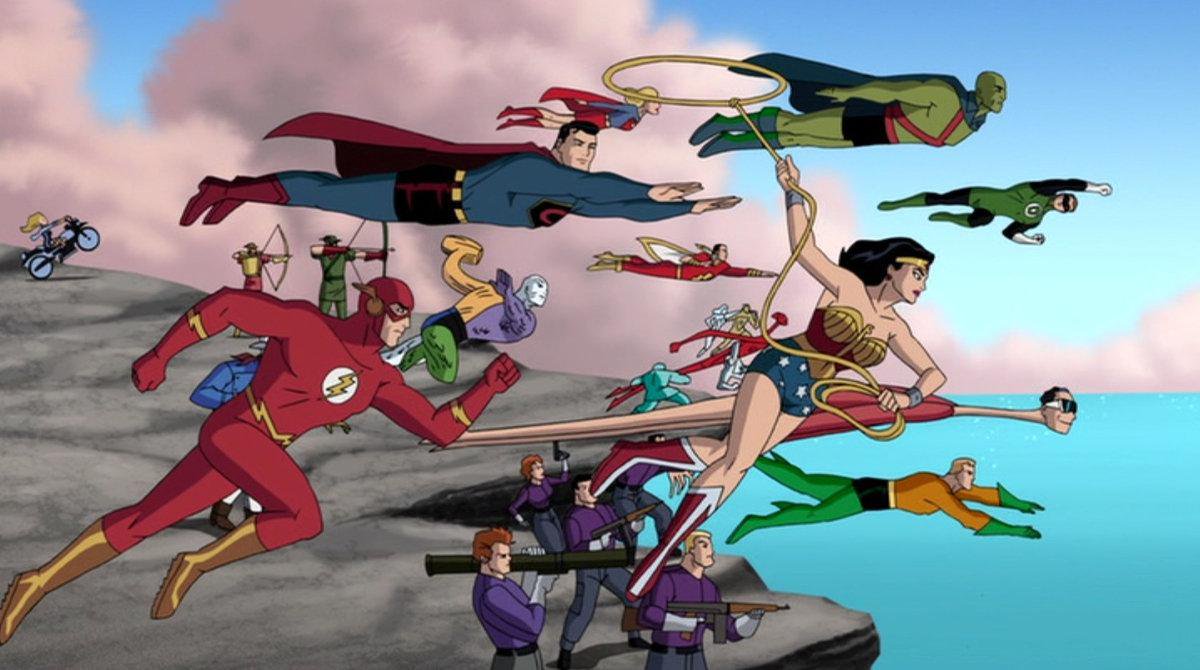 Marvel Comics has DC beat when it comes to bringing their characters to the big screen but in the realm of animation DC rules, from the 1990s cartoon noir of Batman through the great array of Cartoon Network shows to the direct-to-digital DC Universe Original Animation productions of the past decade. They now number over thirty films in just over ten years. This is not an interlocking series like the films of the Marvel Comics Universe but more like a collection of graphic novels with different takes on familiar characters and stand-out stories from the comic books.

Hulu just added a dozen or so to their streaming line-up, most of them featuring the DC supergroup Justice League, their all-star line-up of heroes. Here are six highlights in the collection.

Originally published in 2004, Darwyn Cooke’s limited series/graphic novel “DC: The New Frontier” is part comic-book tribute and part revisionist superhero history. The DC Animation Original Justice League: The New Frontier (2008) is a largely faithful adaptation of the story, a rethinking of the transition between the golden age of Superman, Batman, Wonder Woman, Flash, Green Lantern, and other marquee DC heroes, and the silver age incarnations, as seen through the prism of the real world of late-fifties America: the Cold War, Korea and Vietnam, loyalty oaths, McCarthy. The premise isn’t just historical. It fills in the gap in the comic book record.

Sort of like the “Mirror, Mirror” episode of Star Trek, Justice League: Crisis on Two Earths (2010, PG-13) sends the familiar Superman, Batman, Wonder Woman, The Flash and others to an alternate reality where Lex Luthor and The Joker are the heroes and the twisted super-powered incarnations of our heroes rule the world through a global crime syndicate. They are the “Made Men” of this reality and they rule through intimidation over the mortal population, which is ready to make whatever deal with the devil they think will keep them unharmed. Mark Harmon voices Superman this time around and he brings an interesting touch of righteous arrogance to the part, while William Baldwin’s suspicious Batman goes head-to-head with his sociopathic alternate twin, Owl Man, who looks oddly like Watchmen‘s Nite Owl and is voiced by James Woods. The story, stylized artwork and fluid animation are top notch for the direct-to-DVD market.

Justice League: The Flashpoint Paradox (2013) is an alternate reality horror story adapted from the graphic novel “Flashpoint” by Geoff Johns and Andy Kubert, where The Flash (voiced by Justin Chambers) changes the past and turns the present into world at war between superheroes Wonder Woman and Aquaman turned vicious warlords ready to destroy the earth in their blood feud. It’s the butterfly effect as comic book apocalypse and it’s the darkest and most brutal animated original I’ve seen from this superior line of direct-to-disc productions, with warped mirror versions of DC heroes turned bloodthirsty warriors murdering one another (and even slaughtering children, albeit off-screen) until the frame is littered with corpses. This one earns its PG-13 rating, and the premise was later brought to the live-action TV series The Flash with a different take on the story.

Justice League: Throne of Atlantis (2015) continues the reinvention of the DC Universe in the Animated Original Movies line, adapting the graphic novel of the same name written by Geoff Johns for “The New 52” comic book reboot. Ostensibly the origin story of Aquaman, it also offers the origins of this incarnation of the Justice League as Aquaman’s half-brother declares war on the surface world and Arthur Curry (veteran voice artist Matt Lanter), a man whose ability to talk to fish creates an identity crisis, discovers his Atlantian heritage and joins forces to Earth’s mightiest heroes to stop him. Don’t skip the post-credits tag.

This direct-to-disc animate feature continues to develop a distinctive chemistry of DC heroes, with Jason O’Mara’s grim, humorless Batman and Jerry O’Connell’s Superman, a gentle god of a hero who embraces the mortality of his adopted human home, as the two foundations of the new team. (Superman is dating Wonder Woman in human guise, which is a novel concept for the imperious Amazon queen voiced by Rosario Dawson.) The team is filled out by Green Lantern (a jesting Nathan Fillion), The Flash (upbeat Christopher Gorham), Shazam (Sean Astin as boyish Billy Batson in a demi-god’s body), and Cyborg (a very serious Shemar Moore). It’s a different kind of sensibility from the Bruce Timm-influenced films that began the series and I appreciate the alternative interpretation. Like the comic book universe it draws from, these animated features remind us that there are other approaches to the iconic heroes and stories.

Justice League: Gods and Monsters (2015) is the first original script written specifically for the animated series. Where others have been adapted from notable story arcs and stand-alone graphic novels published in the past few decades, this alternate reality superhero story was written by Bruce Timm (the godfather of the DC animated rebirth that began with the 1990s Batman: The Animated Series) and Alan Burnett as an original screenplay. In this take, Superman (voiced by Benjamin Bratt) is the son of Zod, Batman (Michael C. Hall) is actually a medical vampire born of Man-Bat, and Wonder Woman (Tamara Taylor) is not an Amazon but a New God.

Like Crisis on Two Earths, this is a cruel, violent universe, another version of Star Trek‘s “Mirror, Mirror,” where the superheroes have developed as almost militaristic figures who don’t have any qualms about killing their enemies, and Lex Luthor is no villain but a voice of caution against the unrestrained power of these heroes, who are not held in check or held responsible for any of their actions. They make their own rules and the American government tends to look the other way, perhaps for fear that they will turn against them. At least until the most prominent scientists in the country are murdered and the evidence points back at the three heroes whose brand of justice is no less brutal. The plotting is a little lazy for a conspiracy thriller (the plan depends on no witnesses or forensic investigations) but the creative intricacy of the reworking of familiar characters and backstories is impressive and there are references aplenty for aficionados of classic DC Comics (who would have thought “The Metal Men” would end up significant players in one of these films?). Though hardly essential, it’s a fun variation on a theme and a satisfying addition to the animated canon of DC heroes.

While the title of Justice League Dark (2017, R) suggests an evil version of the superhero team made up of Superman, Batman, Wonder Woman, and others, “Justice League Dark” is actually a comic book series featuring an alternative team of characters whose powers are less super than supernatural. The animated film version reimagines the origin of the team. When citizens start seeing demons in streets, Batman (voiced by Jason O’Mara) seeks out stage magician Zatanna and freelance supernatural investigator John Constantine (Matt Ryan, reprising his role from the live action TV series). They pull together a team that includes Deadman (a spirit who can inhabit living bodies), Etrigan the Demon (a genuine demon from Hell who speaks in rhyme), Black Orchid (a shapeshifter), and Swamp Thing (an elemental plant creature) and they help the original Justice League defeat Destiny, a villain who plans to use the magical Dreamstone to take over the world.

This is one of the darkest animated films from the DCU Animated Original Movie series, with a darker visual palette, magical battles with morphing imagery and an organic approach to magic, and some gruesome violence. It puts relatively obscure characters in the lead, with Constantine essentially taking charge from Batman (who is out of his depth in the supernatural world) and trying to negotiate long-simmering conflicts along the way. It’s a well-made film with an engaging story and an intriguing cast, and there are fans of these non-traditional comic book characters who may be interested in a different kind of animated superhero film.

Also on Blu-ray and DVD and on SVOD through Amazon Video, iTunes, GooglePlay and/or other services. Availability may vary by service.
Justice League: New Frontier: Commemorative Edition [Blu-ray]

The disc editions of these films include featurettes, bonus episodes of animated TV shows with the featured characters, and other original and archival supplements.