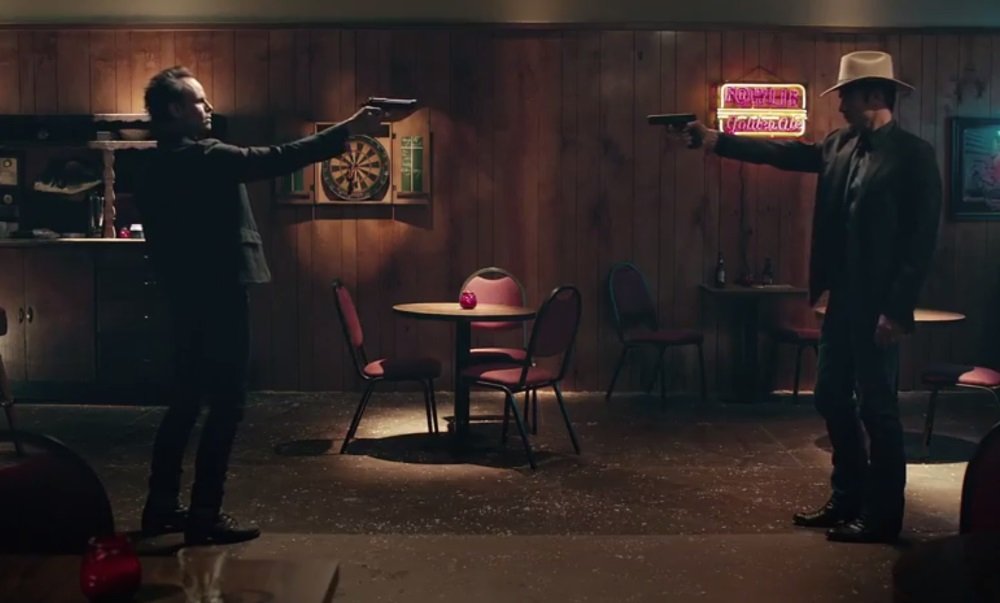 Justified, based on a short story by Elmore Leonard and developed by Graham Yost (in collaboration with Leonard) into a riveting rural crime drama, was one of the best shows on TV for its six-season run on FX, thanks to the way it preserves Leonard’s distinctive pulp fiction sensibility. The sixth and final season is now available on Amazon Prime and it is a satisfying conclusion.

Timothy Olyphant stars as Rayland Givens, a Kentucky-born U.S. Marshall with a frontier approach to justice, and Walton Goggins is his old friend turned criminal nemesis Boyd Crowder, a character who was originally scripted to die in the series pilot. He proved too interesting to kill off and the show benefitted greatly from the rescue. Their complicated relationship kept the series interesting. Fittingly, the series ends with Raylan’s final assignment for the Kentucky Marshall’s office: shutting Crowder down once and for all. That is, of course, only one of the many threads of these richly drawn series, but it puts a personal spin on Raylan’s brand of justice.

While Crowder’s lover and partner in crime Ava (Joelle Carter) plots her escape from both Raylan (who has turned her into an informant) and Boyd, a new player joins the mix: crime kingpin Avery Markham (played by Sam Elliot) comes to Harlan County to buy up land as an investment in the future of legal marijuana while his fiancée (Mary Steenburgen) has her own agenda. While Boyd competes with Avery’s efforts to move in on his territory, he plots an elaborate heist to rob Avery’s private safe, which is located over an old mine tunnel.

As might be expected from a series based on a story by Elmore Leonard, not every character makes it out alive, but there’s nothing predictable about the direction of the story or the characters, who are layered in levels of loyalty and honor and self-interest. Garret Dillahunt and Jeff Fahey co-star and a lot of familiar faces from seasons past—Jere Burns, Kaitlyn Dever, Mykelti Williamson, Natalie Zea, Jeremy Davies, and Patton Oswalt among them—return.

It’s a satisfying end to a show that has consistently combined smart writing, pulp fiction plots, well-drawn characters, and the unique criminal culture of rural Kentucky.

And, of course, the first five seasons are all available to stream on Amazon Prime Video as well. And if you would like to go a little further inside the show, check out this presentation with author Elmore Leonard in conversation with Justified star Timothy Olyphant and series co-creator and executive producer Graham Yost, recorded at the Paley Center in front of a live audience.